I spotted someone using the gorgeous Poppystamps 'Holly Ring' die around Christmas time and absolutely fell in love with it. It's been waiting in my NBUS basket for a first outing and this is what I came up with: 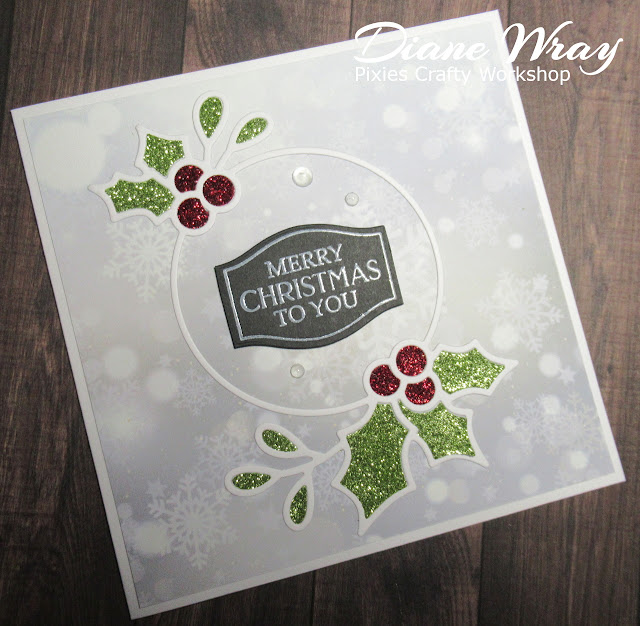 And a closer look at the gorgeous sparkle. I can't recommend X-cut's Xmas A5 Adhesive glitter sheets enough! Not cheap but so good for die cutting smaller elements for cards.

- piece of patterned paper from Whimsy's 'Blurry Flurries' paper pad, trimmed to 5.5" x 5.5" and glued onto the card front

- snippet of white card, die cut using Poppystamps' 'Holly Ring' die and glued onto the layer of paper on the card front, using a glue pen

- stamped the sentiment in white onto a snippet of black card using a Hero Arts 'Unicorn' ink pad and then embossing using Rubber Stampede 'Clear embossing powder' - I quite like that by clear embossing, the white isn't too 'sharp' against the black

- then added three clear 'raindrop' gems (a current fad of mine!) to finish off, using Cosmic Shimmer glue

It's so enjoyable to have some time to relax a bit and do a bit of crafting. Made three cards all the same as there were a few different techniques and a lot of stuff to get out and then tidy away again afterwards. It always seems to make sense to do a couple of extras, particularly when it's Christmas cards.

Of course, this card is heading over to Darnell's NBUS Challenge #35 for February.

I'm also joining in with the Christmas Kickstart Challenge #59, where the theme is 'The Sentiment Takes Centre Stage'.