Dudley had his annual vaccination booster on Tuesday just gone - as well as his annual MOT. He hardly squeaked and was a bit quieter during the car journeys as well. Still huffing like a steam train a lot of the time but the yodelling only began when the car stopped at either end of the journey. Baby steps, baby steps.

Then, it was Len's Birthday on Thursday  and of course Dudley had to have a card made for him to give to his 'Best Buddy' - it's my snippets card for this fortnight: 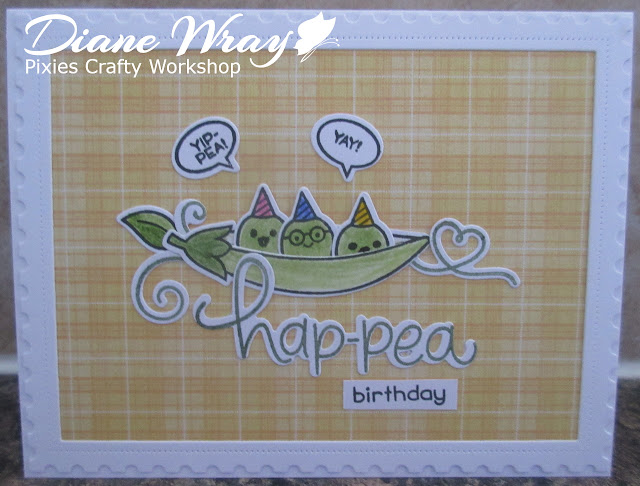 - snippet of yellow patterned paper found tucked into the back of a Memory Keepers paper pad, a magazine freebie eons ago, die cut at just an eighth of an inch larger, on all four sides, than the opening in the white frame

- then adhered the patterned paper to the back of the frame, using a glue pen

- glued the whole panel to the card front

- die cut all the little pieces using the matching set of dies - there's even one to cut the slit across the centre of the pea pod - also fussy cut the word 'birthday' and carefully popped them into an upturned lid from a little plastic box lest they made a bid for freedom!

Len loved the card although I had to point out the subtlety of the little faces in the peas - from the left, yours truly, Len in the middle (although his specs are rimless in real life) and Dudley poking his nose over the pea pod on the right ☺

The trickiest part was adding the stamped features to the faces and also the words in the speech bubbles - having said that, even with my usual 'cackhandedness', they worked perfectly straight away. I did sort of follow the layout of a card I spotted online - but there are umpteen ways to use the set of stamps. I only had a short window of time in which to make the card so I wasn't overly adventurous for a first play.

Also, I have a couple of new toys in my 'armoury' here which I think will make layering loads easier, especially when trying to line up patterned papers. I generally make A2 sized cards these days and during a browsing session I came across some Waffle Flower dies to die cut plain rectangles. There are two sets and I went a bit mad and got both - not cheap, but a really great way to always get perfectly cut rectangles for layering. I used one of the dies to cut the background for today's snippets card and found it so easy to align the pattern. My alignment is straight but not perfectly centred within the frame, that came about when I added the patterned paper rectangle to the back of the frame - the paper itself is lined up spot on thanks to the die, until Dumbo here gets it slightly adrift when glueing it in place! The sets are called 'A2 Layering Die' and 'Additional A2 Layers'. So, from the 5.5" x 4.25" size downwards - each set has 16 dies - going down in literally 16th's of an inch if you combine both sets. Certainly a non-essential addition for card making - but my OCD is 'happy as Larry' with them! I've spotted that they also make other shapes and sizes but for now I'll stick with the ones I have.

Anyhow, here's the prize for this fortnight - which has been waiting patiently in the toy box to be offered for absolutely ages: 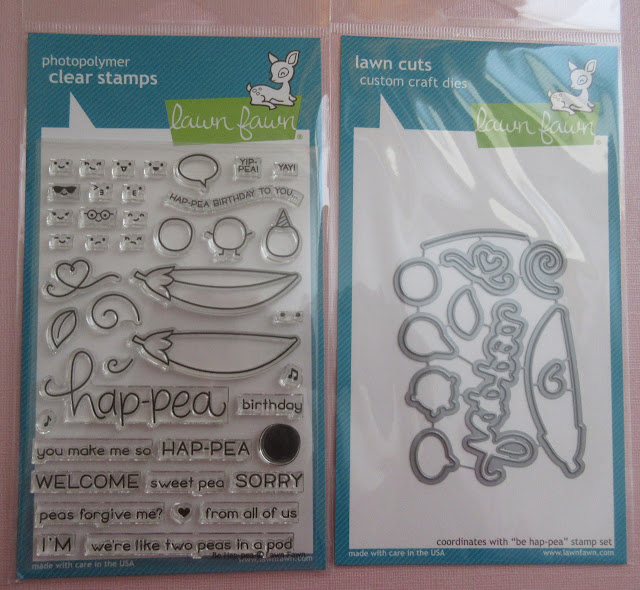 Yup, it's a set of Lawn Fawn's 'Be Hap-pea' stamps with matching dies. I love how many different little faces there are - and so easy to stamp as well!

As always, the Snippets Challenge will run for two weeks and the Playground gates will close at 11am UK time on Saturday 31st October. The gates will open again at midnight UK time on the same day.


Remember, if you link into the Playground and don't say clearly that you want to be in the draw in a comment on here, then you will be bypassed if your name comes out of Mr Linky. I'm sure you all know I ask for a positive 'yes' on the blog post itself - just in case you're only playing for fun - otherwise I don't add you to my little list.
And as the Lawn Fawn stamps and dies were having their first outing, I can enter this into Darnell's NBUS Challenge #19.

In other news, not a lot is going on needless to say.

The hedgehogs are still visiting, although less often so they must be getting ready for hibernation.

Whilst at the vet's I asked about seasonal doggy gastroenteritis - and it's around again this Autumn. So Len has changed Dudley's walk routes to avoid the more popular areas for the time being until we get a real cold snap - which will also kill off the last of the ticks as apparently they're out and about still. That's a mild and damp Autumn for you.

Lastly, with the country slipping back into lock down all over the place, I've made an appointment to have my hair chopped on Tuesday just in case Hampshire follows suit. The salon has loads of protective measures in place - but I'll still be glad when the appointment is over!  I think I need a good three inches lopped off and can't face a further six months or so.

Lots of love from us all - Parsnip, Dudley and of course me. Stay safe!