What a disappointment the other week when the October Hope & Chances Charity kit ran out mid morning on the day that Christine posted it on her blog. First Sunday of the month early morning UK time. Bit of an involved story but some of us were so upset not to be able to support her wonderful work (plus the kit is absolutely gorgeous!), and then Christine very sweetly set to and made up a few more. The girl is amazing to put in so much time and effort raising money for various charities. Sadly she had run out of the circular sentiments but I recognised them as Craftwork Cards die cuts and knew I had some squirrelled away and was able to share with Kath from the Playground as well - someone else who'd missed out.

The kits were sold in aid of MNDA - Motor Neuron Disease Association - yet another very worthwhile charity to support.

Our Kath from the Playground has already published her card but I like to keep a record of cards I make so here's mine as well: 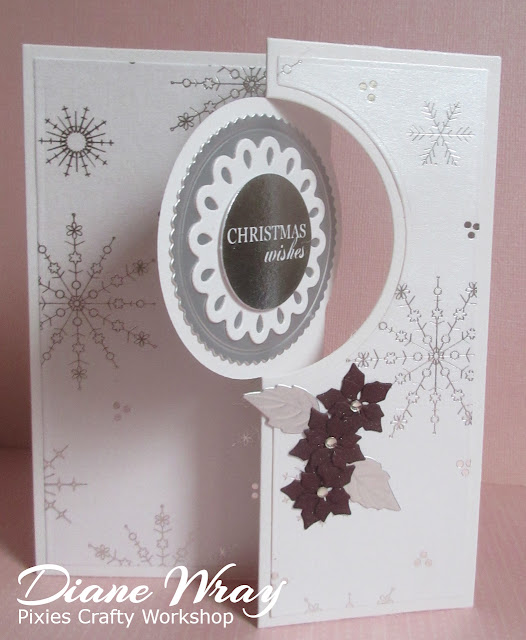 It's self-explanatory and everything came in the kit apart from the sentiment circle, glue, sticky pads (I used thin ones for the sentiment circle) - and clear Wink of Stella which I used on the very deep red poinsettia flowers, a tip I picked up from Kath - along with some tiny little clear gems.

In the end, Kath and I both bought two kits each (so perfect for special Christmas cards) and later I bought the last remaining one, rather then Christine be left with one unsold one (that's my excuse anyhow!). They even came with pretty silver envelopes to made them even more special.

Then I went on a mission to find the Spellbinders gatefold die that Christine had used. I think it's from a Spellbinders Club issue and the set is called 'Many Thanks' - and in the end did track it down on eBay - in the USA! And there it will remain I'm afraid. The price wasn't too bad but apparently eBay control the onward freight of a lot of items and they wanted to charge me almost $40 for that alone on top of the cost of the die set! Daylight robbery surely!

One tip if you do fancy buying Christine's Charity Kits - set your alarm for 7am UK time on the first Sunday of the month if you don't want to miss out. It was a close call this time.

And, this card is for ScrappyMo's Rudolph Days Challenge for October 2020. Still a few days to go if you want to join in!