It's Rudolph Days again over at Scrappy Mo's! You have until the 31st of the month to enter, if you haven't done so already.

I made a run of six identical Christmas cards, and the bright sunlight here has certainly washed out the dark blue a bit, as well as almost obliterating the embossing on the background, sigh: 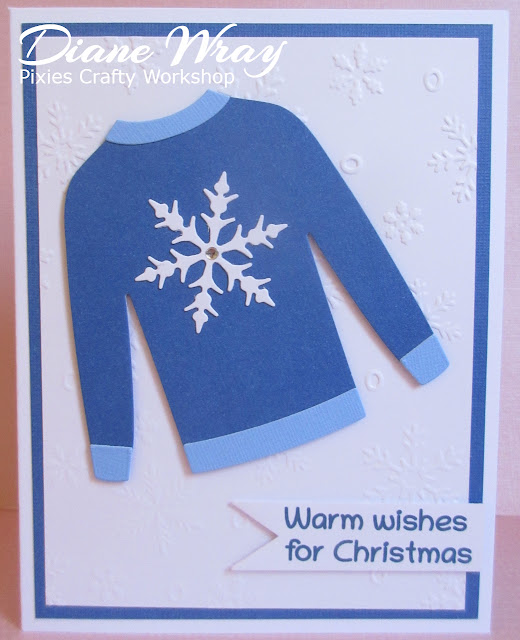 - a layer of darkish blue card, from a pack of several toning sheets of blue card, picked up in Hobbycraft before lock down, trimmed to 5.25" x 4" and glued in place with Collall All Purpose glue

- then a panel of white card measuring 5" x 3.75" which had been embossed using a Darice ''Snowflake Background' embossing folder, again glued on the card front

- made up the sweater using the same colour blue card plus a lighter shade of blue for the neckline, welt and cuffs. The die set I used is another NBUS item, made by MFT and called 'Comfy Sweater' - it comes with two sizes of sweater and has been around for about three years or so. I was lucky enough to buy mine from a Facebook Decluttering Group, unopened and never been used - another bargain!

- topped the sweater with a white snowflake, cut using a die from The Works 'Snowflakes' set of dies

- then the hunt for a sentiment began - I finally found one saying 'Enjoy the warmth of the season' and another one saying 'Warm holiday wishes'.  But I wanted mention of Christmas itself, sigh. Having then totally coincidentally received an email from Jane W, in which she mentioned that she frequently generates sentiments on her computer, I followed suit and printed off the words I wanted onto white card in dark blue. Something I'd totally forgotten about, yet years ago did it quite frequently. Thanks Jane for the memory nudge!

- final touch, a teeny very flat little diamante gem in the centre of the snowflake, so it will still go at standard letter rate

It took a couple of afternoons to make six cards on a 'production line' - but very therapeutic at the same time.


I'd also like to enter this into Darnell's NBUS Challenge #14 for May as the sweater dies were new and unused.

Hope everyone is staying safe.