Hi again! Things are looking up here - we finally have eggs, yeast, strong flour for bread making and even antibacterial hand soap. I'll keep this short and sweet - running a bit late once again, sigh.

Here's my snippets card for this fortnight, and let's hope the sentiment is 100% right, both in reality as well as metaphorically: 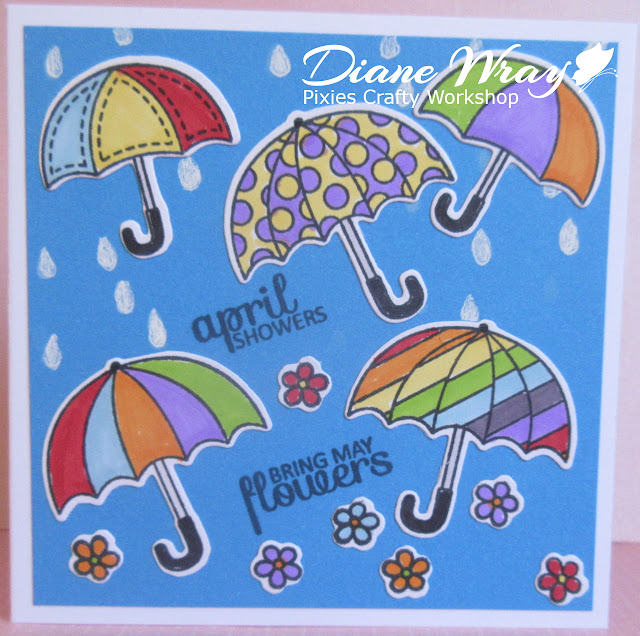 - a snippet of  deep turquoise card stock onto the top portion of which I stencilled some raindrops (badly at that - so badly that with time against me I had to go over the droplets using a white marker pen, which didn't really work very well either). The stencil is by Clearly Besotted, called 'Rainy Day' and I used a Hero Arts 'Unicorn' white ink pad

- then stamped umbrellas and flowers using Memento 'Tuxedo Black' ink, the Misti and stamps from the Clearly Besotted 'April Showers' set of stamps - which is now discontinued and replaced by a very similar set with a couple of additional sentiments added in

- then die cut the umbrellas and flowers using a set of matching dies. It looks to me as if Clearly Besotted are no longer having dies made to match their newer stamp sets - such a shame as they do work together so well for crafters with dexterity issues

- then I could work out where the stamped wording should go by placing the umbrellas temporarily onto the stencilled panel, using the Misti to place and lift the words onto the lid, removing the umbrellas and then stamping the words

- glued the stencilled panel onto the front of the white card blank, using Collall All Purpose Glue

- added the umbrellas then the flowers, using a Zig glue pen - finished!

I loved making this card mostly as the umbrellas were such fun to colour in rainbow hues (very topical right now!), although given more time I would have scrapped it and started over for a few reasons. I mucked up the rain drops - partly as the lovely stencil wasn't held in place firmly enough so it lifted before I'd applied a decent amount of ink and then I went over the droplets with a white gel pen, which spoilt the effect IMHO. Then I could only really salvage a small panel for the card front, which meant less space to work on of course. It would have been so much wiser to have applied pale blue droplets on a white background in the first place - but I needed to use more than just white snippets so opted for the blue snippet - caught out by my own over zealous interpretation of the rules there as white snippets are perfectly acceptable! (NB I edited this as it originally implied that white snippets don't count - they do, whether left white or coloured over. Sorry for the confusion Liz!). I also wanted to use/showcase all the umbrella images - and I think the end result is too crowded. Not to worry, it does the job :)

I'd seen the set of stamps, with and without the dies, being used in Blogland for some considerable time before I got round to buying them - and even then I sat on them for ages. One of our Playmates uses hers quite frequently and in a much less crowded way than I did. Hope over to Jane W's blog HERE and then just type April into the search box at the top left of her home page and some lovely examples will pop up.

Shame on me for not using them sooner - but it does mean I can enter this card into our lovely Darnell's NBUS Challenge #14 HERE. I do encourage you to join in if you haven't done so already - now is an ideal time to crack open some Never Before Used Schtuff and this current challenge runs to the end of May.

And here is the prize for this fortnight: 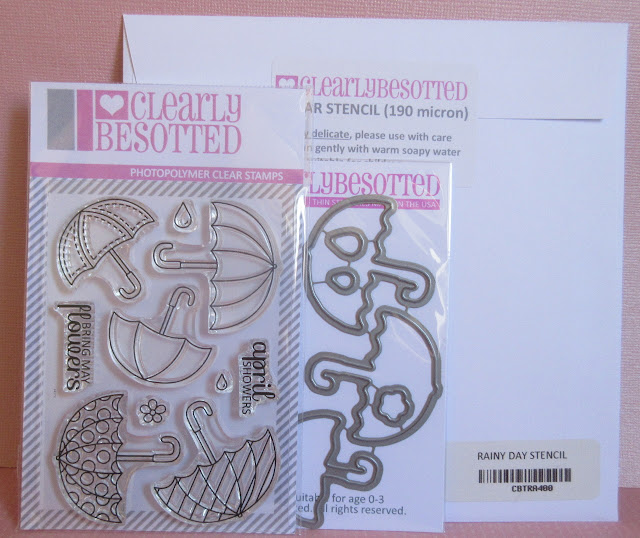 The stencil packet is sealed and my own stencil is tucked away again, but here's an image from the Clearly Besotted website so you can see properly what it's like out of the packet: It's Clearly Besotted's Rainy Day stencil with their 'April Showers' set of stamps and matching dies.

As always, the Snippets Challenge will run for two weeks and the Playground gates will close at 11am UK time on Saturday 16th May. The gates will open again at midnight UK time on the same day.

Dudley is doing fine, still totally free of matts and now allowing me to hold his front legs one at a time to groom them - much easier than the prancing act! Then, to have his 'undercarriage', tummy and such brushed and combed - he's learnt to sit up on his hind legs rather like a bunny rabbit, with his front paws outstretched as if in surrender! It looks really cute - would be so hard to take a photo as I reckon he'd sit back down if I wasn't brushing and fussing him - and I only have two hands - but I'll see if I can manage it sometime soon. Len hasn't seen him doing it yet - looks so, so sweet, but he's easily distracted so Len keeps out of the way when it's 'groom o'clock' each afternoon!

This afternoon's grooming session will be fun - Len just mowed the back lawn and Dudley's favourite game is to roll in the freshly cut grass if he can get away with it!

Edit: After Dudley got himself covered with little pieces of stray grass, Len had decided to brush him before he came back into the house. Not long after that, Saturday, I'd lifted Dudley onto his grooming spot and remembered to say to Len, who was fetching his basket of grooming tools for me, that he absolutely had to see his latest trick. 'I know already' said Len - 'Dudley sat up like a rabbit in the garden to be brushed so I thought Mama had been teaching him some new moves!'. No secrets in this house! x


Stay safe my lovely friends. It's proving to be a long haul and so many things have had to be cancelled or put on hold for now. Many friends have had to miss Birthday celebrations, holidays and other fun things, as well as being unable to even meet new babies born into their families. Two lots of people I know have had to postpone their Weddings. It's a tough time - but one we will get through with patience and common sense. And the occasional G & T perhaps!