Well, that came around fast - it's another monthly Rudolph Days challenge over at Scrappy Mo's - and I'm squeaking in at the last minute, it closes today! I made a set of four very similar cards, using a NBUS (never been used schtuff) set of stamps and dies, plus another NBUS die for the sentiment.

That means I can also join in with Darnell's NBUS challenge #13 once again. And, I'm long overdue to join in with Craftyhazelnut's Christmas challenge so am also linking over there. Hi Hazel, remember me?

These are the cards I made, the same idea for each of them but reversed as the llamas are facing different ways: 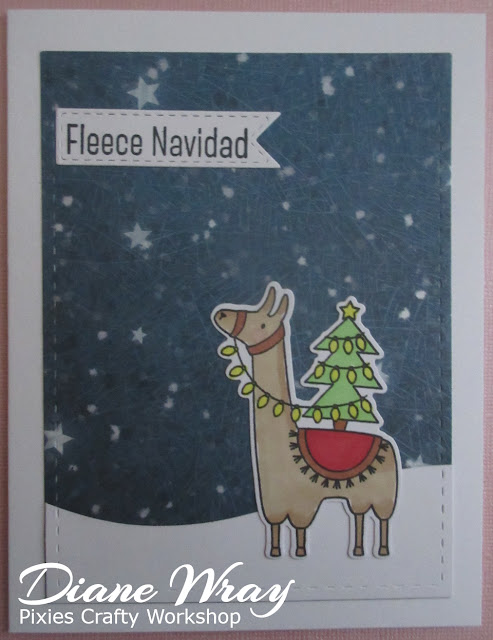 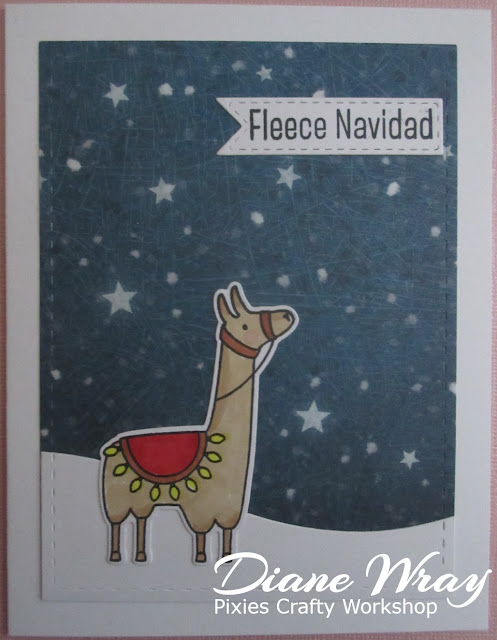 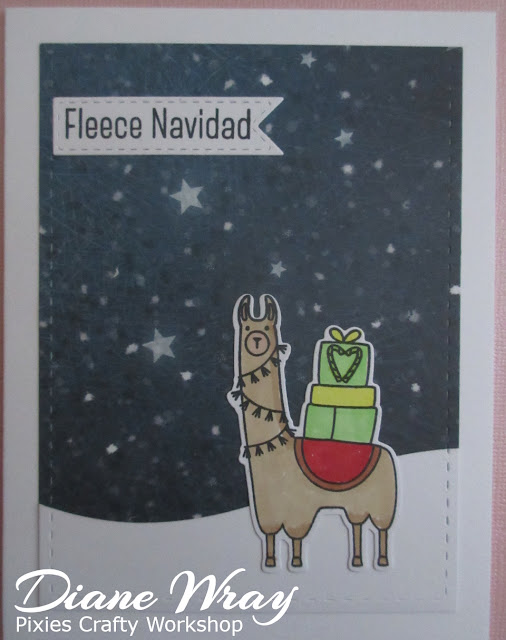 - stamped four llamas using the image stamps from the NBUS MFT 'Happy Llamadays' set of stamps as well as four sentiments from the set (I stuck to 'Fleece Navidad' as it tickles me so much - geddit? Real wool brings me out in a rash!) - using Memento's 'Tuxedo Black' ink pad and of course the Misti

- die cut the sentiments using another NBUS die from the Frantic Stamper 'Stitched Fishtail Banners' set - the dies are 'solid rather than frames with an aperture'  if that makes sense. That's easily got round if you've already stamped your sentiment - just die cut a template from a scrap of card, position that over the sentiment then sit the die into the template aperture (a little wiggle of it will let you know when it's sitting properly) and then run through your machine. I do also use small pieces of removable tape to hold the template in place and then the die itself (OCD once again!)

- backing paper is ancient, from a 12" x 12" sheet called 'Blue Texture with Stars' made by Craft Creations Ltd - long before I found out about 6" x 6" paper pads. Having looked online I'm not even sure they're still trading in the same way, let alone producing gorgeous papers like they used to - such a shame. Interestedly though, I did track down some of Craft Creations original papers to a shop in the USA!

- the snowy hillside was made by cutting 6" x 2" strips of white card and then die cutting the top edge using a wavy die from a Spellbinders 'Curved Borders' set of dies - I need a decent stitched wavy die, the closest one in the set I used is sort of 'dots' which wouldn't sit too well with the other stitched edges (IMHO)

- next glued the llamas in place, same pen again

As I so often do, the inclusion of all four versions is really mostly for my own record. I do think the last llama has the look of an astonished Dudley about his face ☺ x

I'd been eyeing up llama stamps for quite a while and was delighted when this set of Christmas llama stamps and matching dies popped up on a de-cluttering forum on Facebook a week or two ago. Got them, quarantined the package before opening and am so, so pleased with them. They're brand new and never been opened, for just over half what they cost to buy from suppliers right now. I do love a bargain!

The cards were great fun to make and for the first time in ages I really felt as if that lost mojo could well be on the way back - hooray!

Up until now, my focus has been very much on struggling to get grocery delivery slots and also doing some home baking - crafting has been less to the fore. On Monday I baked bread, for the first time in years right from scratch rather than a (naughty me) packet mix. To my amazement I managed to get Canadian very strong bread flour as well as dried yeast from Ocado - so I baked Stottie Cakes - a traditional Northumbrian flat bread - which I'd always shied away from attempting. And, even if I say it myself, they were exactly as I'd hoped - I found the recipe whilst searching on line for 'fadge' (a bread that doesn't use yeast) which I'll also give a try whilst on the baking 'roll'. And the secret ingredient in the Stottie cake bread dough is a tiny amount of white pepper - who knew? My shoulder suffered a bit from 10 minutes kneading plus a good bit of clearing up - but, so, so worth it! Even better than sausage rolls Jane W - I kid you not!

Many, many years ago, when sitting my GCE Domestic Science mock practical exam a few months prior to the 'real' exams, the brief was to cook a Cottage Pie (plus carrots or cabbage as a vegetable I think), and bake a loaf of bread in the allotted time. Come the actual exam it was 'make a Cottage Pie' (so the teacher had hit the nail on the head there in the 'mocks' )...........and no bread at all! I read the brief several times, and turned the sheet of paper over a few times as well to make sure I wasn't dreaming, wearing my school uniform mini skirt, rolled up at the waist - as we did in those days. No bread needed (see what I just wrote there - needed, kneaded). There was almost time to sit, file and polish my nails! And maybe even do a pedicure as well!

Having said all that about food, we might need cranes to lift us out of our sofas when this is all over, snigger. I swear my clothes are shrinking in the wash already.