Our very own rainbow

The other evening whilst we were watching TV, Dudley pricked his ears up and gave a few barks. Then, we heard the letterbox being opened and a lot of effort being put into posting something to us. Next, the doorbell rang and we heard little feet scampering away. And this is what we found: 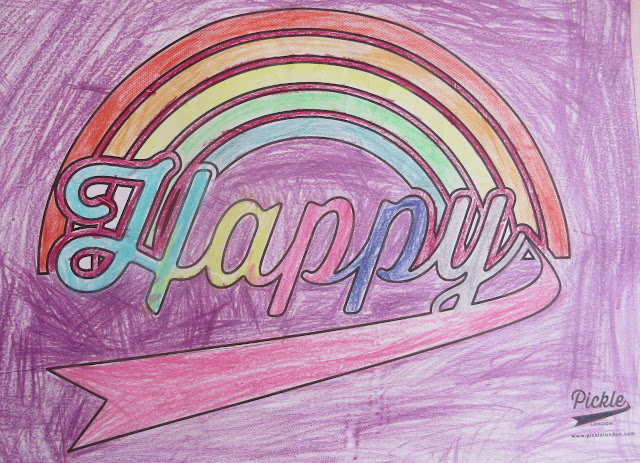 It's our very own A4 sized rainbow to put in the window! I think it's country wide that children out on their walks are playing 'spot the rainbow' or similar. Children are making these to show there is hope and that everything will be OK.

The little girl next door, called Gabriella, isn't yet seven and she coloured this for us. How sweet is that?

The piece of paper was badly crumpled from the effort of posting so the following day I carefully ironed it between a couple of sheets of paper, adhered it to a piece of card, popped it into a document holder and then stuck it to the inside of one of the front bedroom windows.

There was a note, also crumpled, which I also ironed as flat as I could: 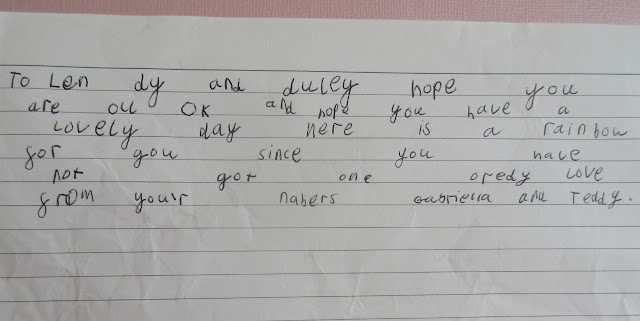 'To Len dy and duley hope you are oll OK and hope you have a lovely day here is a rainbow for you since you have not got one oredy love from your nabers Gabriella and Teddy'.

I know, I know - I did shed a few tears. Teddy is their adorable Shih Tzu by the way. Often it's the little gifts from the heart that mean more than so much else.

My next batch of images for Gabriella (and now one of her brothers) to colour is already under way - along with some using pigment ink which can be water coloured as a change. Keeps me out of mischief :)