What a week and a half this has been! More of that later.

But, wisely, I grabbed some time on Wednesday to make my snippets card for this fortnight: 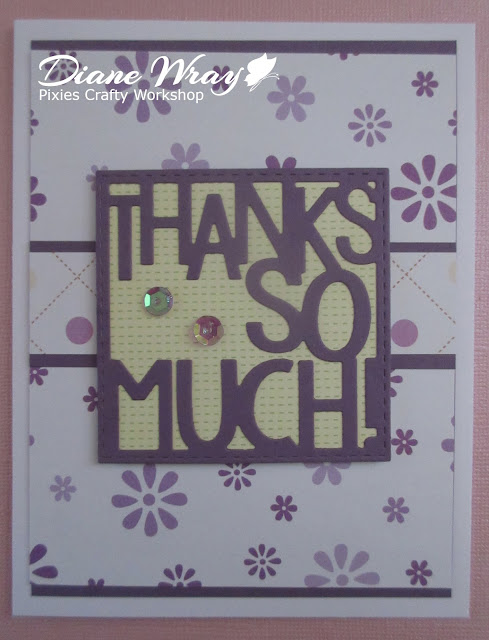 - a snippet of daisy patterned paper from the back pocket in an 11 year old Daisy and Dandelion 'Picnic Patch' paper pad, backed with a snippet of SU's 'Perfect Plum' card stock, not even enough to make a full frame so I opted to just have borders at the top and bottom. Adhered them together

-  then a different snippet from the same paper pad, backed with slightly wider 'Perfect Plum' and adhered to the panel - got the pattern centred across the card as well! Trimmed both ends from the back, as usual

- glued the front panel to the card blank

- backed another snippet of 'Perfect Plum' with Stick-it adhesive sheet and die cut the message panel - using a Lil-Inkers die called 'Boxed Up Thanks' and the Altenew Mini Blossom die cutting machine. LOVE that little machine, it's so quick and easy for smaller dies - and so far is working perfectly

- used a lemon coloured lightly patterned snippet of paper from the same 'Picnic Patch' paper pad, backed it with plain white card and trimmed it to a tiny whisker smaller than the die cut message before popping it onto the back of the message square using a small tape runner

- adhered the message square to the card front on top of the band using thin sticky pads - it's very slightly skewed, my trademark these days!

Once again, the camera picked up a weird thing - both sequins are the same mauve, albeit iridescent.

I mentioned on my Rudolph Days post the other day that Lil'Inkers is closing down. Naturally I had a tootle over to see if I could find any goodies for the Playground Toy Box. Almost fainted when the postage for a handful of very lightweight and heavily discounted items was going to be $29.99 so I left it.

However, Seven Hills Crafts here in the UK (run by Tara and Rick) have a fair amount of Lil'Inkers stuff in stock - not reduced (yet) though. I did buy a few small items for the Toy Box and the die I used today is one of those. I really love it, and it has the Lil'Inkers signature stitched effect on that outer border, just not showing up well in the photo. 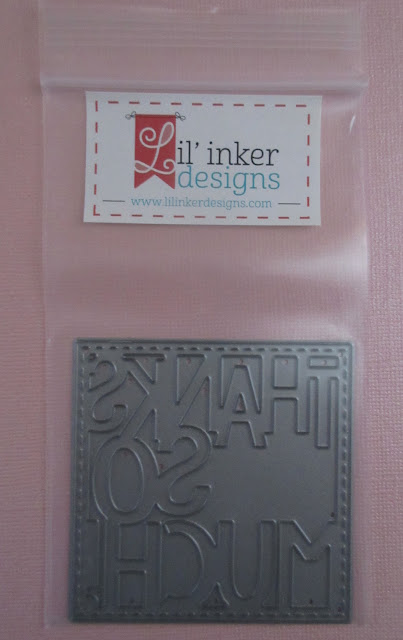 A Lil'inkers die called 'Boxed Up Thanks' die. My card was made pretty quickly, I bet you can come up with much better designs though. I especially like that it's ideal for making card for chaps as well as the ladies. Unfortunately, even Seven Hills are out of a lot of designs - as a Birthday Wishes one in this style would be really so useful! I've just done another search of Seven Hills and the items I did manage to buy are now out of stock - word has gotten around that Lil'Inkers are closing it seems.


As always, the Snippets Challenge will run for two weeks and the Playground gates will close at 11am UK time on Saturday 22nd February. The gates will open again at midnight UK time on the same day.

This is quite long but very important - changes to the rules. Please read.

Up until now I've been very relaxed about our 'rules in the Snippets Challenge. However, some boundaries are being pushed too far by a small minority so I'm clarifying and tightening up a few things.

In future I will delete all 'back linked' entries from Mr Linky, regardless, and they are very easy to spot. You make a card, you post it and you link before posting anything else on your blog and preferably on the day your post goes live - otherwise it's a 'back link' and will be deleted.

From now on you may only enter this challenge plus another nine challenges with your entry - making a total of 10 challenges. That's pretty generous, any more than 10 and your entry will be deleted from Mr Linky.

I also will be looking to see that you have said in your blog post what you've used, as one or more snippets, to qualify you to join in with the Playground. I don't need reams of detail but in the past I often had to give the benefit of the doubt but from now onwards, if it isn't written there for me to see easily, your entry will be deleted from Mr Linky.

Also, I won't take up more of my own time to leave you a comment to explain why an entry has been deleted, I do this on my own and the 'rools' are still few, as well as very clear, so that's the way forward.

So very many of you always play really fairly - and lot of it was down to my relaxed attitude as I wanted the Playground to be as easy going as possible until it suddenly hit me that I needed to rein things in.

Naturally I still love the Playground but I don't want it to be abused, and we were heading that way. If we lose some players then so be it. It's not a huge change - really just making sure that people play nicely as well as fairly!

I didn't manage to finish off my sorting out of my own parcel for Mary as planned. Spent Tuesday afternoon in our local hospital's eye clinic with an emergency appointment, which meant I was at the tail end of a very long list of appointments. The old HSV Keratitis flared up in my left eye after a four year respite - and it's one of those things you can't ignore, much less treat without having to trot off to hospital. Ha, ha - I did say I wanted to get out and about in the car more but didn't bank on that being one of the first destinations. Much less as the car park was overflowing and folk were literally driving round for 20 or more minutes looking for parking spaces. I finally tottered back into the house at almost 6pm.

Thursday afternoon was a bit of a nightmare too. Long story cut short - we discovered that the groomer we had trusted on Dudley's previous visit is more interested in rattling through as many dogs as possible and it seems had given Dudley a very hard time. He'd been caged as well as tethered with a neck loop and was traumatised when we collected him. Basically, she was trying to juggle three dogs at once - on her own. We heard his anguished squeals and also spotted the noose when we arrived back before she expected us. Poor little chap was up in the early hours of Friday morning being sick - purely due to being so stressed. Thankfully he's slowly coming round to being his old self again but isn't venturing too far from one or other of us.

Sadly UK dog groomers aren't regulated, otherwise we'd certainly take it further. All we have been able to do is give her a stinking review (and as a result she set her local coven of groomers on us like a pack of rabid wolves), and we'll find a better groomer, without purely £ signs in their eyes. My firm view now is never to trust a one person 'business' - in future we'll go back to the big boys who may not act as if they know it all but who have more than one person handling things and are not afraid to work in an area where they can be viewed by customers outside a glass walled salon - or even on CCTV, which I found today when looking for other dog groomers. Who knew? It's obviously a known problem if some groomers are making their actions open and clear to owners.

Edit: And just to add to the fun - one of the self appointed 'Head Honchos' of the 'groomers coven', found this blog and had a dig around - in our Playground. So I've had to turn on comment moderation - sorry girls, it's actually very quick and easy for me to check and publish so it matters not here.

For now, Dudley is still clearly affected by the experience, very clingy and sleeping in a tightly coiled ball as if trying to protect himself. Poor little scrap. We do joke that in an emergency we'd both make a grab for Dudley and leave the other one to get out!

Have a lovely week - we have high winds forecast for today, Sunday, so we don't plan on venturing further than Dudley's toilet trips!

I hope that the vast majority of you agree with me spelling out the 'rools' above - I'm trying to keep this place so fair for everyone. It isn't meant to be draconian - in fact it's just the way many challenges already run. And of course, not many challenges have such a free theme as ours, which is 'just use one or more snippets'. I've written it in red text, not to shout but purely as I expect many of you skim through a lot of what I chunter on about :) Story of my life really, sigh.

Lots of love from us all - Parsnip, Dudley (a quiet woof, woof!) and of course me,