We're off to collect little Dudley later on this morning. This was him on Tuesday at the breeder's house, playing hide and seek! He's a real character and there's gonna be some fun (and very busy) times ahead :) 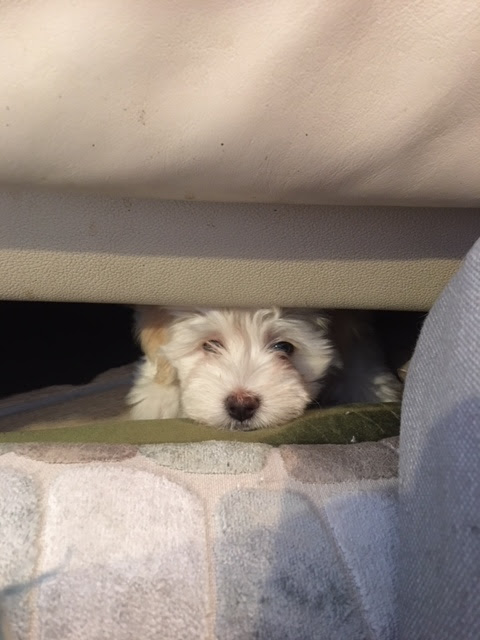 We're so very grateful for all the photos and videos which we've been sent by the breeder - charting the past almost four weeks of waiting for him. And his little nose is getting blacker as the pigment kicks in, but we've always said it could be sky blue pink with purple spots on - so long as he's happy and healthy.

The house and garden have been 'puppy proofed' to within an inch of their lives. This is an example of the upstairs banister railings: 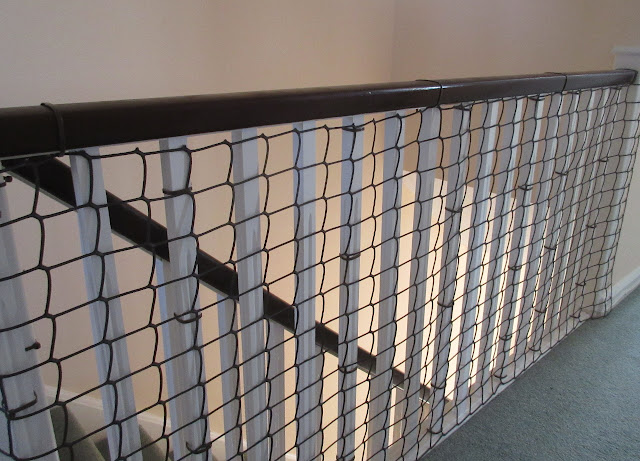 Taking no chances that he sticks his head, followed by his little body, between the white uprights ........... it's a looooong fall onto a tiled hallway. Clever 'Len the Inventor' went and bought a roll of brown clematis netting (after I trawled for hours trying to find the right ready made thing on line) - I think he did a great job using cable ties and ingenuity, and until Dudley is bigger it's some peace of mind (watching that he doesn't decide to chew through it!) for the odd time he will come up, in my arms until he's big enough to manage stairs, to help in my craft room. I suspect that for a while when alone with him I'll be downstairs in any case though. And of course we have puppy gates all over the house - kitchen/hallway, top and bottom of stairs and a spare one to move round as needed.

A friend of Len's did say at archery yesterday that, no matter how well prepared you think you are for a new puppy - there will always be that one thing you've forgotten! Eeeeek - I wonder what he eats?!?! Joke :) x