I wanted to boost the number of Christmas cards I have here and chose what I thought would be a quick and easy design. Huh, not really the case but I ended up with six cards all the same and it's always good to have cards depicting the real meaning of Christmas: 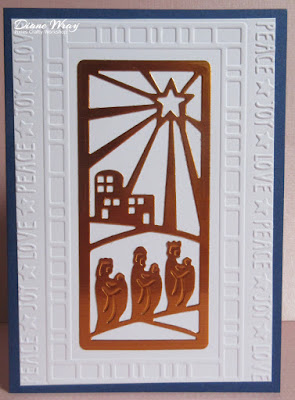 - piece of white card stock, embossed using a free embossing folder that came with a magazine a while ago - then trimmed the embossed panel so it had an even border all round when added to the blue card

- to be honest, the dark blue card started off at 6" tall but I then chopped quarter of an inch from the height so that the white panel would fit evenly. It's a trick I use now and then and a useful one to remember - besides which, I often find that working 'backwards' is easier

- now I had a pile of cards and a pile of white embossed panels to play with, so I put them to one side to concentrate on the die cutting

- OK, about the die set (it's the central image plus a surround which creates the 'frame') . It was a freebie along with the matching embossing folder - but it had a couple of 'dull' spots where the Kings' arms are held in front of their bodies which I thought might mean a rethink or even disaster

- I used XCut self adhesive foil paper in copper for the die cutting and after trial and error (but no wasted foil thankfully!) I found that adding three layers of paper as a shim  over the 'dull' spot ensured a really clean cut

Hmm, just realised I'm way too late to ask anyone to be Guest Designer this coming Sunday. Looks like I'll be making a snippets card myself :)

You did well with six more cards to add to the total Di and love the red foil central image against the white embossing, and the blue background layer and a very pretty mix with the copper foil. x

A beautiful card and a good tip about cutting 'dull spots'.
Kath x

Hi Di this is a gorgeous design for a Christmas card. Take care. Hugs Jackie

Why is it that the cards we think are going to be quick alway seem to take twice as long as they should? A beautiful card Di and worth the effort and at least you ended up with six for the box.

Looks lovely. Great to have 6 more done for the Big Day!

I love this die and you made such a beautiful card with it. (or 6). It's so nice to be so far ahead on your Christmas cards.

It is always the same, the one you think will be quick and easy always end up being a nightmare and the ones that you put off doing because you thing will be too much trouble end up being easy peasy.
Super EF and a lovely image, like the red white and blue.

Hi Miss Di, a gorgeous card, love this design in crisp white with the blue and metallic, I think blue suits it best, I have made a couple of these and they have always had blue with them. Have a wonderful week... Megan

Lovely traditional Christmas card and so cool you have six done for the box! The embossing is a gorgeous frame for the beautiful scene. It's good you worked out how to make the cut work best! Always a bit of a nightmare! Hugs xxxxxx

Looks perfect with the matching embossing folder. Must admit
I missed seeing that as a freebie . It's very elegant and just right for when a meaning of Christmas card is required to be sent. . Your way in front of me with your card numbers. Must try harder. Still contending with the aftermath of last week. BTW did you loose your T V signal from Cyrtsl palace and have to retune your channels this week? Hugs Mrs A.

Oh Di, this is so beautiful with that copper foil paper but I can just imagine how you had to fiddle around with it to get the perfect cut. Thank goodness you managed, because the results are perfect. That embossing folders looks like it was made for this card and it frames your central die image to a T.

We're picking up Hannington transmitter - but have had to retune as well.

Will email you about the EF and die - I've got another one so similar that was thinking of ditching this one so it's yours if you would like it. Just needs the shims where the wise men's heads meet their shoulders.

And i'm slipping with CC numbers so some will deffo be bought ones this year!

Yes, those shims can be a card-saver!! Wonderful result Di, and I have been known to trim the base to fit an embossed layer too - or to tidy a crooked edge!!
Blessings
Maxine

Glad you figured a way to make it work as it is a beautiful die & I love it done in the copper foil! Wonderful card--or cards, I should say!

Oooo what a stunning die, I love traditional images too sometimes for that one special person, Luv Sam x