I forgot to add my usual reminder to Sunday's snippets post - it's Rudolph Days from today until the end of the month over at ScrappyMo's HERE!

This card is my entry, and I managed to make three of them exactly the same: 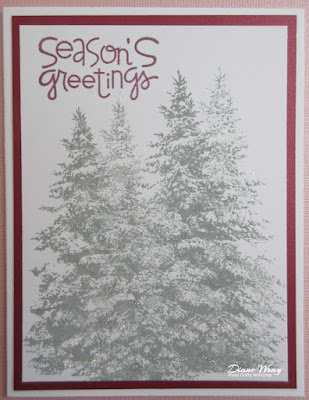 - then, I moved the stamp about half an inch to the left and stamped it again (leaving out the 2nd generation step) for a darker image

- then added some 'Art of Craft' own brand micro glitter to the trees using a Zig glue pen (needless to say it's impossible to capture the lovely sparkle on camera although if you enlarge the photo and peer very closely some of it does show up, sigh)

- trimmed down a deep red card snippet to an eight of an inch all round larger than the image panel and ran a dark red Whispers pen around the cut edge as the off white core of the card was irritating me (OCD strikes again!)

I bought this stamp before Christmas and offered one as a prize - after seeing what a lovely card Sarn had made using her stamp set. I just couldn't find a nice enough blue in amongst the 1001 ink pads lurking here so opted for the 'Iced Spruce' - which then needed a pop of deep red and some sparkle to bring it more alive.

Thinking about it, the Tim Holtz 'Broken China' Distress Oxide ink pad would have probably worked fine as it's such a pretty shade of blue - one to remember for next time.

Wow! These pines are just stunning, it seems to me to can really see the snow! I can see a bit of sparkling here and there, but I'm sure that there is much more IRL! :D Fabulous card!

A stunning card. The pine trees look very detailed and the depth you have created with your stamping is great xx

A lovely card Di - the colours are perfect.
Kath x

Hi Di this is a gorgeous Christmas card I love it. Take care. Hugs Jackie

A fabulous card Di, I love the way you've managed to make it look misty.

These large pine trees are stunning onyour pretty card. I loved the pop of colour with the sentiment too!

The trees are well done with the shadow stamping. I did not realize that you had done that until I read the post. I thought it was a stamp image of four trees. Well done you! And four finished too...another Well Done!

Thanks for taking part in the April Rudolph Days Challenge.

I think these beautiful trees are on my wish list now Di and they work well using the Iced Spruce DI and the red frames them perfectly. x

It's beautiful, Di. And the color is perfect xoxo

This is gorgeous Di l love the stamped trees and how you stamped them larger to cut down so effective it is too! nice coloured edge just finishes of your card to perfection Di xx

Really beautiful trees and a great decision on the pop of red.

Hi Di, a gorgeous layered stamped card, is it me or does it seem like they are swaying? Have a wonderful weekend... Megan

I am a bit of a realist so I like the iced spruce for your trees. Love that stamp too and the sentiment is interesting, which I also like. Lovely card. Kate xx

Oooo well done you for making 3 fabby cards and I'm loving the iced spruce for the trees too, thanks for joining us at April's Rudolph's Day Challenge, luv Sam x

Ha, ha - it could be that I didn't trim the card srtaight?! x

This is such a pretty card with a great, simple design! I love the iced spruce color with the pop of red, and I'm sure that sparkle looks much prettier in person too!

Love the layered trees, it's a beautiful card

A beautiful look with the soft layering you did. This looks like a very foggy snowy morning in the forest. Pretty tree stamp too, and you've used it so well. TFS & cuddles to P. Hugs to yourself!

I have a similar stamp, I just adore these great trees.
A beautiful card with such a serene scene.
hugs xx

Gorgeous! I do love those winter pines! You have made a beautiful card with them...thinking I might need the large ones as well as the small ones...

A gorgeous card. I will make a card or two with my prize one day I promise. I have been recovering from surgery, so just trying to catch up now.