Where did the last fortnight go to? Here we are, into May tomorrow (it's May Day Bank Holiday here in the UK so a long weekend off work for a few folk). Despite it being almost May, we've had a real drop in temperatures here during the week - and snow in a few Northern parts of the country. So we're not out of the woods just yet - and my woolly vest and warm bloomers are staying put for now!

As always, a huge thank you to everyone who came to play this past fortnight - loads of gorgeous entries.

This is my snippets card for the coming fortnight: 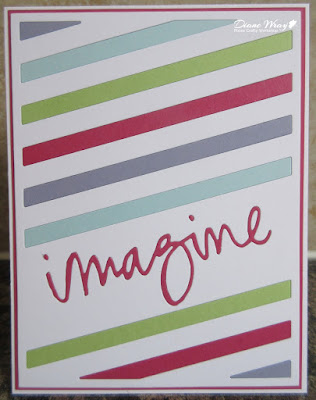 - snippet of dark rose pink card, trimmed to slightly smaller than the card front and set aside for later

- then die cut the sentiment out of the plain wide strip, using a Memory Box 'Sketchbook Imagine' die - making sure to keep the little pieces of 'waste' from inside the letters

- next, cut a piece of double sided self adhesive sheet to a teensy bit smaller than the die cut panel and popped it onto a snippet of white card which I then trimmed down to the edges of the adhesive sheet.

- peeled off the remaining piece of protective sheet and carefully applied the sticky card to the back of the die cut panel so that the apertures were now backed with sticky. (TIP - keep the piece of waxed protective paper from the sticky sheet to cover up the panel in between working on the next stages)

- die cut the 'Sketchbook Imagine' die again, using more of the deep rose card and stuck it into the apertures on the card front - followed by those little pieces of white waste I'd set aside earlier

- selected a variety of little strips of coloured card stock from the snippets folder and die cut a set of strips, inlaying them onto the card as I went

- ran the completed panel through the Cuttlebug to press everything down

- glued both layers onto the card front - and called it done

This really is a fun way to use up snippets, I always seem to have a lot of little strips that I can't bear to throw away. Just think of all the colour combinations, a dark or black background would look fabulous, red and green for Christmas, and maybe silver and gold perhaps for a touch of luxury? Another way to use the die would be to stamp a sentiment onto the plain panel, either a really bold, wide one or perhaps a shorter one with a die cut flower beside it. And of course, the strip cover up die itself can be used the other way up - so that the plain panel runs across the top third of the card. Very versatile IMHO.

Probably don't need to spell out what this fortnight's prize is made up of: 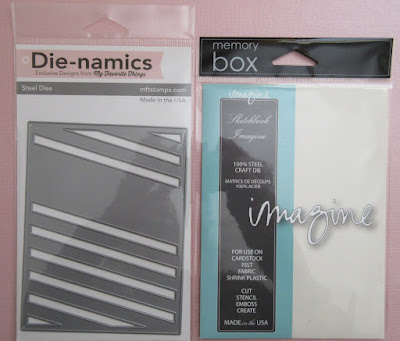 Oops, got my reflection again :)

The prize is two dies, exactly the same as the ones I used today - MFT 'Diagonal Strip Sentiment Cover Up' and Memory Box 'Sketchbook Imagine'.

I will split the prize if necessary, both dies work beautifully together but would also work very well apart. I've seen a few really pretty floral cards using the 'Imagine' die as the sentiment. But, as always - both items are one complete prize if you wish to play for them as a pair.

The Snippets Challenge will run for two weeks from now on and the Playground gates will close at 11am UK time on Saturday 13th May. The gates will open again at midnight UK time on the same day.

It's still a maximum of ONE entry and please say in a comment if you wish to play and be a possible winner of the prize. The prize is both items together as a single prize, unless you really do only want to try for a 'split' - in which case I'd do a further draw for the other item. Please also link back to the Playground in your blog post to be eligible for the draw.

Be sure to call back next week to see the winner of last fortnight's prize plus my picks from the past two weeks - as well as another lovely guest designer too!