There's a story behind today's prize - first of all here's the card I made: 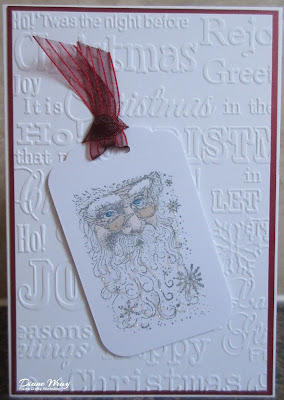 - next I punched a label using SU's 'Scalloped Label' punch

- then stamped the beautiful Santa face onto it using Memento 'Grey Flannel' ink and a stamp from Habico's 'Christmas 4' set. More about this stamp set below BTW

- a touch of Glossy Accents on Santa's specs

And, I made four cards exactly the same as a head start for Christmas 2017 :)

Of course, today's prize is based on the Habico 'Christmas 4' stamp set I used - and here's the tale. Our Playmate Kathy K has recently been using this wonderful stamp set and I absolutely had to rush off and buy it as a prize! This is the set which includes the Santa image that has been around since at least 2008. I know that Kathy also has a larger Santa stamp of the exact same image (I think Rubber Stampede made it) but I missed the boat there, sigh. However, there are ways to use the smaller one, as I showed above: 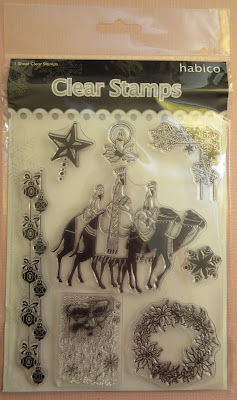 That's the chap, bottom of the set. Kathy also made a beautiful card using the Three Wise Men stamp from the same set: 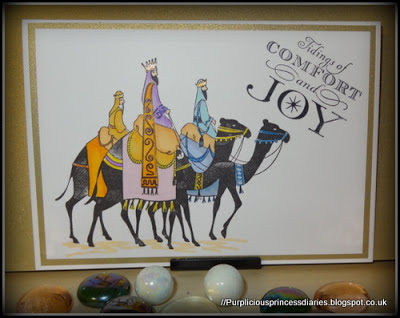 It's a big and bold stamp which I think is just stunning, and so beautifully used and coloured by Kathy - and you can take a closer look over at Kathy's blog here. Thanks for letting me share this Kathy - I owe you as there was no time to even attempt to make a sample, besides which yours is perfect!

Crumbs, I almost forgot! In all the excitement of finding this fabulous set of stamps, I got my paws on three for today's prize! This is the last prize on offer for the five year celebration so it seemed right to throw in a few more chances of winning :)

The Playground gates will be closing very soon, at 11am on Saturday as usual. I am left with one Christmas themed prize - but it's quite a special set of stamps and matching dies so rather than squeeze it in here - it will be on offer from Sunday's new Mr Linky. I think you'll like it - a lot!

At the end of all of the celebrations I'll do a massive draw session for all the prizes shown during this celebration, up to and including today, using the one Mr Linky - which is on the main snippets post HERE - so you do need to have entered one snippets make over on that post to be in with a chance :) Maximum of one entry please - to keep things fair for those who may not have had much time to craft.

The card that kicked the giveaway off is the slider card I made for Len: 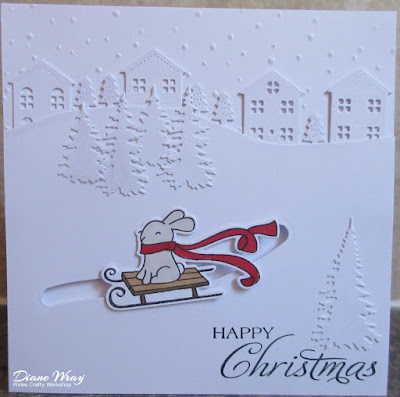 He's my much trusted in-house critic but I caught him out with this one. He always finds the most amazing cards to give to me - this year it was a hologram Christmas teddy bear image on the front  :) He opened the above card on Christmas morning, raised one eyebrow and said 'Ah, you had to give in I see and buy one'. He held his hands up in surrender when the penny dropped that I'd made it - best result ever!