It's a while since I posted a new recipe on here, and it was so lovely to temporarily feel up to making and rolling out pastry the other week (albeit from a packet) to bake this lovely quiche. Ha, then the lurgy arrived so I'm falling back on this draft post sooner than planned! Nice recipe for Christmas time😋

A lady at Len's archery club bakes for them each week and he's been raving about her similar quiche for weeks now. So, I found a recipe and had a play. Apparently it's not quite the same but delicious in any case! 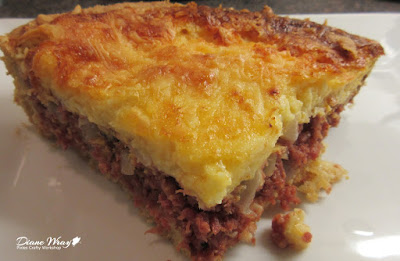 Makes: 1 quiche - warning, be careful here! I used a standard shallow quiche dish and had I not reduced the quantities by a third then we'd have had a right load of waste/overflow. My advice is to even half the amount of mixture or use a really deep quiche/pie dish - I have that one I inherited which is at least 1.5" deep and will certainly use that next time.

The quantities below are the original recipe - my adaptations (six eggs for two of us seemed huge!) are in brackets


Tip:
This quiche can be eaten straight away, eaten cold or reheated in the microwave. It goes lovely with either chips and baked beans or a nice refreshing salad. I know that Len eats it cold at archery, but there again it seems that the recipe is slightly different.

I served ours with mashed sweet/plain potatoes and cabbage, We also had half the quiche left over - it's in the freezer right now in the hope that it can be defrosted, popped onto a pie dish and reheated to its former glory! All the more so since I finally got a bit of an apetite again.