The current challenge over at Less is More is 'Time to Celebrate' - and Chrissie and her brilliant team certainly have every reason to celebrate is it's Week 300! Congratulations ladies!

I love to join in with Less is More whenever I can and was determined to play along on such a special week. I chose to celebrate Christmas at the same time with this card: 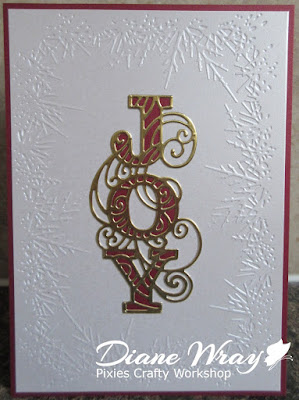 - piece of backing card in pearlescent deep red, cut to the same size as the card front and glued in place

- using the scroll work die from the same set, die cut the word JOY(that layer is an 'all in one' cut) using gold Xcut adhesive metal effect sheet

- stuck the red letters behind the scroll work JOY, then added little spots of glue to the backs of the red letters using a Woodware fine line glue bottle and popped the whole assembled word onto the embossed card front. The glue behind the solid letters plus the adhesive on the back of any uncovered gold scroll work holds it nicely in place

I'd also like to enter this into three other challenges that I love to play along with:

Made three the same and although I've slowed down a bit in production due to this wretched back, there's a nice healthy box of cards which probably will cover us anyhow. But, I won't stop production just yet, of all the cards I make, it's the Christmas ones I enjoy most. Weird or what?!