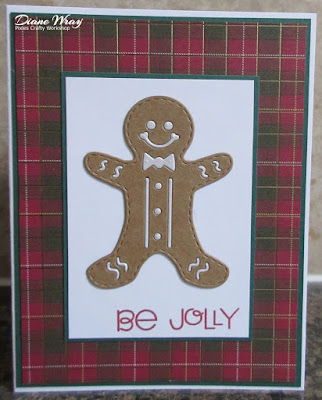 That is a very good gingerbread boy die but I'm glad you didn't upset him with your 'eat, drink....) words!! What make is the die please?

Absolutely gorgeous, that die is super and really calls out for the resty of the card to be quite CAS to show him off to the best effect
Jane

A cute little gingerbread boy Di, with a big smiley face. He had made a lovely card (or rather you have!). My New Year's task is to sort through all my stash, 'lose some of it' and use all the items that I have bought and forgotten about. We shall see... Kate xx

Have left a comment on your blog Val! The die is by Frantic Stamper but I can't find it being stocked anywhere in the UK right now, sigh.

He just makes me smile Di - such a cute card! xx

Gorgeous die Di your card is lovely and l like the background paper too just finishes it of to a tee! xx

Oh, how cute Di, I adore this gingerbread boy and he looks wonderful against the red plaid. Thank you so much for joining in with the November Rudolph Days Challenge.

p.s. I must have been really busy and just did not see her post at the beginning of the month so didn't realise she had been in the wars. I did wonder why it had been so quiet. Just hope she is a whole lot better by now. x

Hi Di,
what a very wonderful card.
I love that super cute Gingerbread Boy, and what a very lovely design too.
Lots of crafty love. Jenny L.

What a lovely fun card, the gingerbread boy is so cute and really like the Be Jolly sentiment. So glad you didn't use the eat word too.
Jean x

oh, this is super cute!

He's a cutie! I used to always be on the lookout for the perfect gingerbread dude stamp or die. I finally gave up the quest and suddenly everyone has ones that could be keepers.

What a cute gingerbread man card Di. That is a super die and I love the way you inlaid the icing....
and with my DT hat on thanks for joining in the fun over at the Rudolph Days challenge xx

Such a cute card Di, I love the gingerbread man and your check paper!
Janice x

I love plaid, especially this dark red & green color - but that gingerbread die cut is adorable!!! What an incredibly CUTE and fun card!!!

Cute card plus, did have a chuckle about eat drink and be merry poor little gingerbread.
Hope you're improving Di, pray so,
Thanks for sharing,
Shaz in Oz.x

This card is a beauty Di. Your little Gingerbread Man looks like he's ready to jump off and do a runner:) Seriously, I love the colour combinations on this card and the background works just perfectly with the die. Happy crafting, Sandra x

I had to leave a comment on this one Di. That gingerbread person is fabulous! Such gorgeous colours and I love your design - nice and fresh with plenty of yummy, just like gingerbread should be. I saw over at Mo's that she's still not well as here hand hasn't heeled yet, will make an effort to enter as I've bit been prepping much for Christmas this year xx

What a great image, love the white on the kraft and the gorgeous papers.
Looks good enough to eat!

This is so cute! Love to eat gingerbread men so Eat Drink and be Merry would have made me chuckle!

I can finally use my finger but it is very sensitive. I find it difficult to reach (or rifle through) supplies, to grab things out of a drawer or box of supplies if my fingers have to brush against other items. Anything brushing against or pressing against my knuckle makes me gasp...bit of a drag...

Still can't colour as I can't grip the pencil for too long. So I bought some new Xmas papers and have been making cards by cutting up the elements on the pages and framing or matting them them. Thanks goodness for precoloured images...teehee

Thanks for your concern and I am sure I will be back to my old self soon.

Thanks also for taking part in the November Rudolph days Challenge.f

Hi Di, a great Christmas card, I've been contemplating gingerbread and the possibility of baking some... your little fellow looks delicious (but don't tell him that) 😃 happy belated Rudolph Day... Megan