A couple of weeks ago I sent Maura her Presscut 'Step Card Cutting' set of dies, won in the Playground, and enclosed a card as I always aim to do. The package has now arrived so I can post this on the blog :)

I thought it would be an idea to make her a step card using my own die set - I know that when I first tried my own set out I was so very grateful to have the lovely card that Liz had sent me a little while ago as a reference.

My card was made very quickly as I wanted to get the prize off to Maura ASAP: 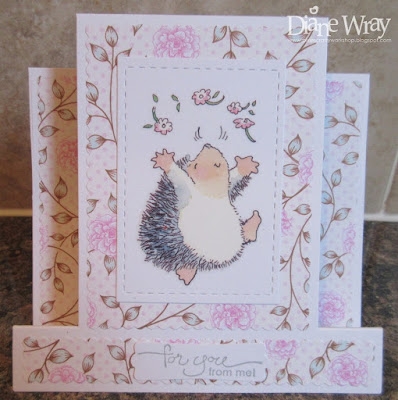 - A4 300gsm white card, full length but cut to 5.75" width - just enough to accommodate the die and also go through the Cuttlebug with a smidgen to spare on either side

- a hint - if you buy this die set and only have a small cutting machine like me, you'll need to tape the die in place onto the card stock and then carefully turn it round after cutting one half. And, I almost wrecked my Cuttlebug by trying to push the sandwich through with the top of the long die aligned right up to the edges of the cutting plates. They need about an inch of 'freedom' to go through the rollers before meeting up with the die, then it works fine  - and the same when you cut the other half of course

- after folding the card I flattened it out again and added the scalloped edge rectangle and strips, die cut from a 6" square sheet' of paper from the Wild Rose Studio 'Vintage Rose' paper pack

- the image is a Penny Black Stickeroo from the 'A Bunch of Love' sheet, popped onto a piece of white card and then die cut using a Lil' Inkers 'Stitched Rectangle' die

- the sentiment is by SU from their 'A Word for You' set, stamped using Memento 'London Fog' ink and then punched using SU's 'Modern Label' punch

- too late to photograph now but I also used the slightly odd looking 'spare' die to cut a liner from more patterned paper, then stuck a plain white scalloped rectangle on for the message to Maura :)

It might be 'cos I'm using a Cuttlebug which is really on the edge and quite a snug fit, but I did feel that some of the cut edges on the card itself needed something like a burnishing tool or even a bone folder held flat and rubbed over them just to take away any little lines that you often get when cutting solid shapes. Apart from that - it's a star here!