Cuttlebug Mania - Down By The Sea

The latest challenge over at Cuttlebug Mania is 'Down By The Sea'. All you have to do to join in is to follow the theme and also use a manual die cutting/embossing machine - simples!

The prize this fortnight has been kindly donated by KennyK Downloads - wahoo, these are such fun images too.

This is my card following the 'Down By The Sea' theme: 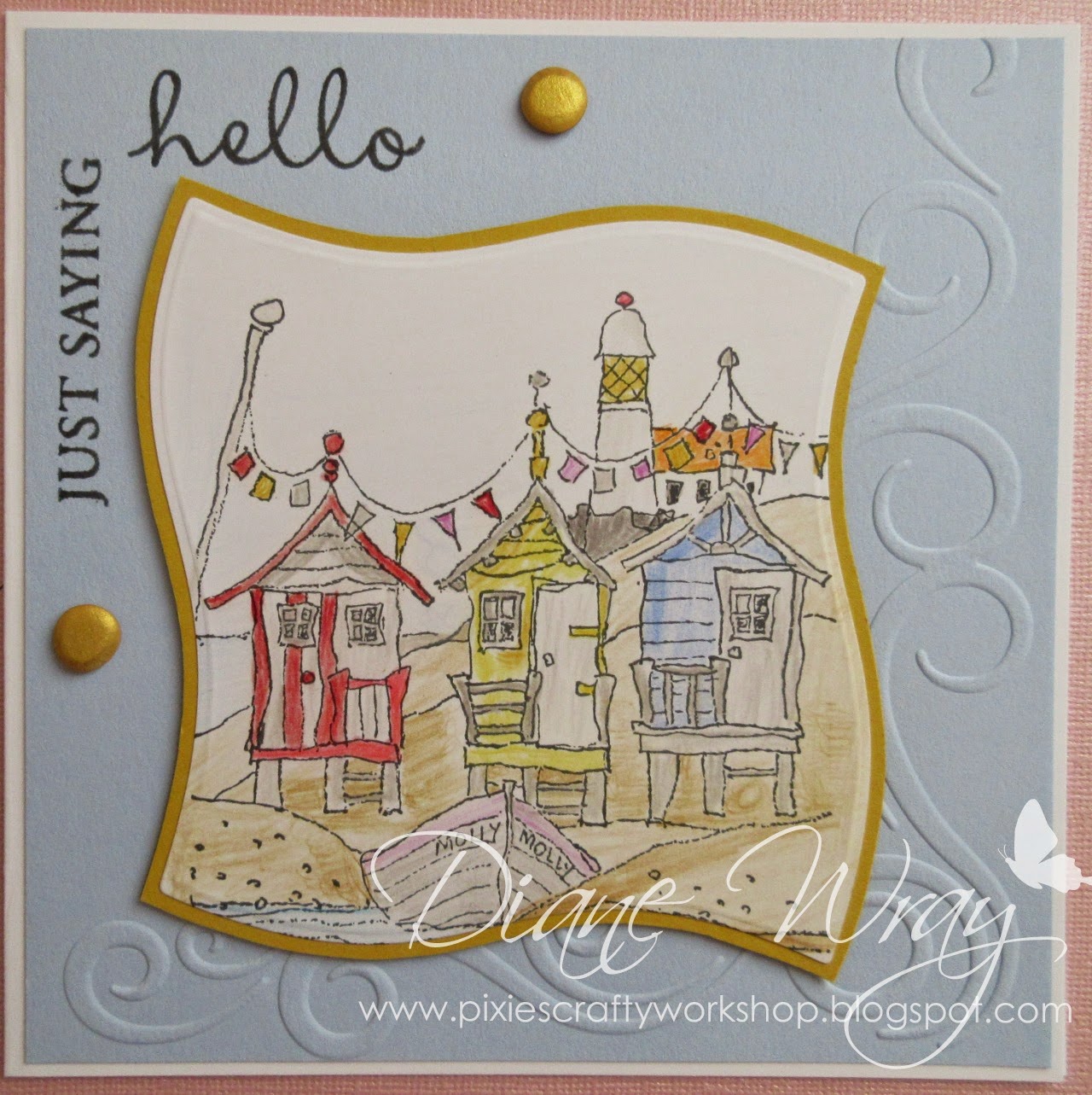 - the die to cut this image out was really a 'no brainer' given that the image is quirky/wonky. I used Spellbinders 'Wonky Squares' of course. As it's the largest die in the set, and also because I prefer narrower frames anyhow, I drew round the die and hand cut the yellow frame from a snippet I already had here

- the sentiment came from the Hero Arts 'Truly Appreciated' set, stamped using Memento 'Tuxedo Black'. I'd already clipped the sentiment into two parts previously, and for a change placed it around one corner

Job done - now it's your turn to hop over and play.

Great card Di, love the EF for the suggestion of waves and the stamp is perfect. I love his work, there is so much to look at (including Molly the boat in this case!!) and you have done it justice with your colouring xx

This is just lovely, Di. The die you've used to cut out the image is just perfect - it reminded me of the waves at the seaside. Great tip to draw round the die and hand-cut to get a narrow border - now why have I never thought of doing that?? xx

What a fabulous image and love how you coloured it. Makes such a wonderful card!

I so miss our days in Filey at the beach huts We spent our mornings there having our tea or coffee and bacon butties. (sp?)

Love it Di! I'm ashamed to say I have two of his stamps and they have still not seen ink!

OOH . . . I have that stamp . . . thanks for the reminder! LOVE how you coloured it and it fits that wonky square perfectly. Great card.

What a lovely card Di and that swirl embossed background reminds me of the sea too.
Jackie x

I just adore these beach huts Di and the lovely wavy shaped mat suits it perfectly, also the swirl embossing creates the feeling of waves too. A gorgeous card! x

A gorgeous card - that stamp looks wonderful in the wavy frame! Love your choice of colours too.

Beautiful! Love the seascape scene and that die you used. LOVE IT!
Lynn

Fabulous card Di, that wonky square die is perfect for the charming stamped image. i love the embossed background too.
Jean x

Under the Boardwalk, looks like you've been having some fun.
Great quirky image and fabulous colouring.

Oh my goodness, look at those cute little beach huts!! What a fun card Di, love how you colored those beach huts and I love your embossed card base! Hugs, Brenda

I have those wonky square dies and I really like them. This card is perfect for the theme. I like using seaside images so I might have given this challenge a go, but with my son arriving tomorrow morning, it isn´t likely to happen. You do so well to be on this DT and manage that unruly playground. I always like what you make too. Kate x

Love this diecut, and the cute seaside cottages! Makes me wish for warm days at the beach!

Such a beautiful card! Love the stamp, love the die cuts and I love how you coloured it too - just gorgeous Di. Have just entered a 2nd creation for this weeks snippets, love Sarn's stamps and covering my bases just in case funds don't stretch this month lol! Keep well hun, I'm a little better today so trying to link and visit Karen xx

I love the whimsical shape for your matting of your fun colored beach huts, Di! What a fun layout! Now regarding the challenge, do you mean to say you can enter if you use a Big Shot, even though it's called Cuttlebug Mania?? Hugs, Darnell

This is lovely. Summer seems such a long time ago and a long way away!
Love that wonky die cut too.
Hugs
xx

Oops! Nealy missed this one Miss. Fabby dabby with the quirky die cut. Hugs Mrs A.

Perfect scene to use the wonky S/B. Totally cute beach houses and like the soft blues & yellows with the pop of the little red hut! TFS