A blast from the past

Waaaay back in time, when I started card making in earnest, I bought a shed load of die cut frames. This was before I even knew about desk top die cutting machines and amongst them was a great favourite, a triple aperture, that I used on many a card in those early days. Trying to find space for some new goodies the other day I came across a big packet of die cuts and some triples were still lurking. So I made three of these: 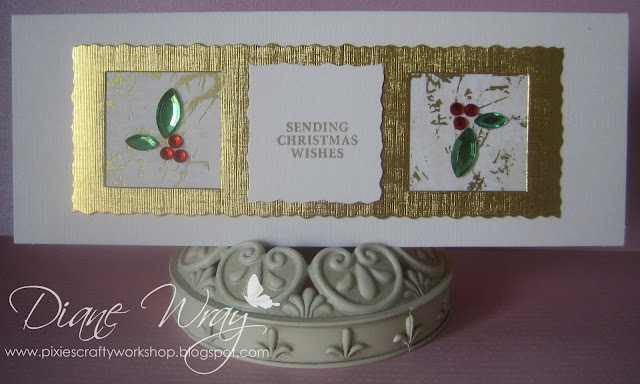 - backing paper, a blast from the past by Craft Creations called 'Ivory Small Stars With Foil'

- then I cut up some squares of the linen card stock using the 'deckle' blade on my Woodware trimmer and stamped (on the non-linen reverse) the sentiment in gold before popping onto the card with thin sticky pads. The little sentiment is from SU's 'Joyous Celebrations' set

That makes a total of 57 Christmas cards all ready to just write and send. I'm not being smug, 'cos no-one likes a know-all, but it feels good to be a bit ahead of the game. However, we do send out absolutely loads of Christmas cards - mostly due to my globe trotting past - so there's still a lot to make yet :(

And, did you seeeeeee the fabulous 'card stand'?! I've craved one of these for years ever since I spotted Bev Rochester using one to display her cards for photos. It's a Yankee Candle (or similar) Jar Lid and Kay will confirm that we searched high and low for one the same or similar last September in NM. The wonderful Maureen of ScrappyMo kindly gave me one of hers on Wednesday, all the way from Canada - I love it to pieces! Thank you again Mo! Must admit, it sits on my desk and keeps being stroked with little whispers of 'My preciousssssssss'.

Remember the Playground closes at 11am today - UK time - and will re-open at midnight. I'll do the draw for Ryn's Raindrops stamp, plus the normal weekly prize - and next week I'll be asking you to help to name our new Playground mascot :)