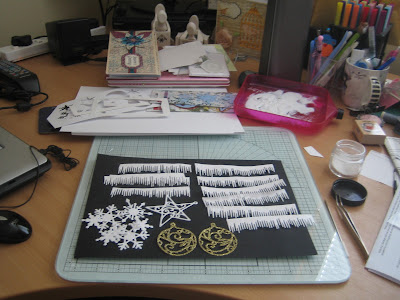 Most cards to post are finished so now I'm about to work on some hand delivered ones. I must be barking as I decided to make some 'sparklies' for those cards using some Marianne Creatables Dies which were leaping up and down asking to be used this Christmas and not next :) As they were to be sparkled up a bit there was a little bit of head scratching here, I couldn't see that they would cut ready glittered card OK as what I have is quite thick and crunchy stuff neither did I fancy trying to cover the intricate designs with glue and glitter.

Ta,da!! That wonderful double sided adhesive A4 stuff galloped to the rescue. I've used it to back mulberry paper, and more recently some vellum, as well as sticking it over stamped images then sprinkling with glitter for a snowy effect - it's versatile stuff!! Joanna Sheen has it in her shop here, free postage with a £5 minimum order too. This latest use was an experiment but worked a treat! 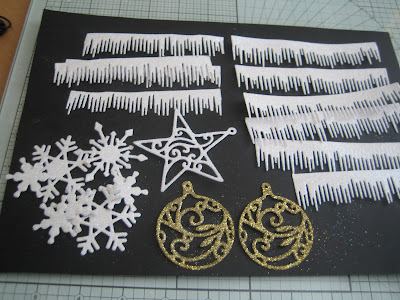 And here are some of the end results. I dunked the baubles into very fine gold glitter, which also worked just great.

A tip - if you use the Marianne Creatables icicles die - you can see from the second photo down in this series of piccies that once the die has been cut you're left with a mirror of the die cut, the one on the bottom right shows this well - two for the price of one! I've even used the leftovers from the back to back ones on the left of the photo - if they'd been spaced further apart it would have been better but this was a bonus I hadn't expected anyway :)

That's me for this Wednesday - to see what other crafters are up to, head over to Julia's here. There could be a lot of activity going on, so long as folk have time to stop and take a photo of what they're up to in the rush towards Christmas :)

Edit: Following a couple of comments there are two things I should clarify. Firstly Jude, the glitter I used is really fine iridescent stuff, almost the same as Glamour Dust, and can be bought from the Art of Craft. I do love, and use Glamour Dust, but for large areas the miser in me uses the pot of stuff from AOC as it is most definitely not your average glitter, much cheaper and the closest I reckon you could ever find to Glamour Dust. I've been trying to find it in their online shop so I can put a link to it here - I'll have a little search again later :).

Elizabeth asked whether the adhesive film makes dies sticky - the answer is 'no'. That was my biggest concern when I tried this idea out. When you cut you still have the flat surfaces of the card 'non'sticky' and the 'point of cut' around the dies is not left with any sticky residue - I've checked! I think this way is less harmful than cutting ready-glittered paper/card. Mind you, ask me again when I've cut a shed load more!!  If I find a problem then I'll own up :)

Happy WOYWW!! It's my first Christmas 'outing' of the year this evening with a crowd of friends for a meal and some fun and frolics. Tee, hee - it also means I don't have to cook an evening meal here :))