Harumph!!!! I thought I was being so clever when I bought some gorgeous plain red metallic paper and a load of white organza ribbon to wrap the little ones Christmas presents ready to send off to Germany. I didn't think about gift tags!

So, yesterday I set to and made eight of these: 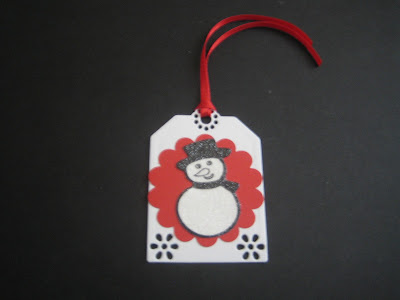 My original idea was to stamp some images and then colour them with Pro Markers but that would have meant backing the card where the colours bleed through - also time wasn't on my side. So, a quick rootle through a box of neglected embellishments brought these little snowmen to light - thereby keeping the theme of red and white parcels :) I  know, the little ones probably won't look twice at the wrapping paper - they'll be much more interested in the contents!


I used:
- white card
- a Marianne Creatables die, from the labels set LR0154
- red scalloped circles punched from red card using a Stamping Up punch
- little sparkly snowmen toppers from stash
The fun bit was wrapping a couple of the gifts which are shaped a bit like Christmas puddings (I'll leave you guessing as to what they are) - ended up almost playing football with them around the house!