The little grand daughters have been here again and are now on their way back to Southern Germany. I didn't manage to get time to craft with them as we were out and about a lot, but I did snatch a couple of quick photos before they set off today: 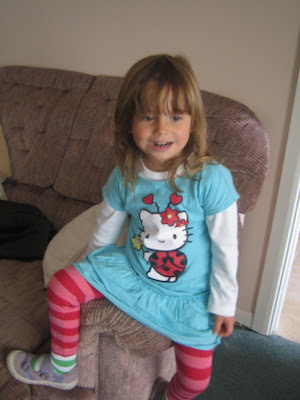 I was just going to post one each of the girls piccies, but then I noticed Mia's right foot and shoe in this one - at first I thought she had a wonky leg!! She insists on picking her outfits and dressing herself, and maybe doesn't know her right foot from her left one just yet :) I did think she was walking a bit funny this morning! Here the TV, as a distraction whilst things were being packed into the car, was much more interesting than GranDi behind a camera. But then, she glanced up at me and posed nicely! 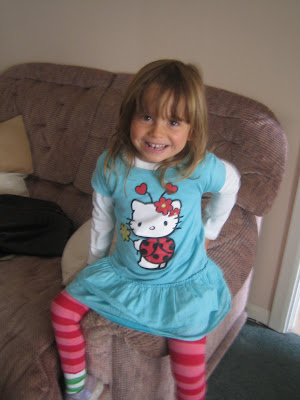 ﻿
﻿'Hello Kitty' is her favourite right now - taking over from Peppa Pig (snort, snort!!). She's a little gem and looks after her baby sister so well. In less than the two weeks since they were last here she is chattering away in English so much more. 'Whatcha doin' GranDi?' seems to be a favourite - along with 'Why?'!!
And here is Livi, the budding tea leaf/locksmith! 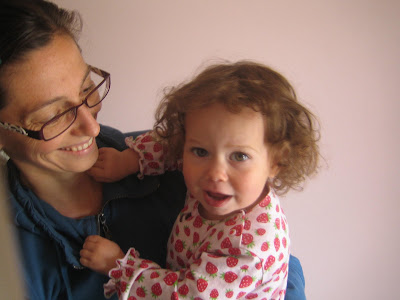 She was already frisked for remote controls and keys (yup, we also had to hide keys AND put the heavy fire extinguisher out of her reach after she toddled into the dining room carrying it) - being kept out of any potential crime scenes with her Mum, Kai. You can see the look of pure love on Kai's face - her girls are everything to her, along with their Daddy of course. Meanwhile Daddy and Grandad were outside doing what seemed to be an impossible job, packing the car brim full. They finally managed although the CCTV camera shots, when sped up, look just like a Laurel and Hardy movie....I swear that car was unloaded totally about five times, with much consultation between father and son and head scratching going on :))
It's been a great, although exhausting week. Reunion followed by the girlies visiting again. Hopefully normal service will resume and I need to do some serious blog-hopping as I just didn't get a chance on WOYWW.
It was sad to see the little ones go, along with Matt and Kai, but we're going over there in about six weeks time for a week. Ha, revenge will be mine - no key, remote control, oven timer, dishwasher button or stereo knob will remain 'untwiddled with', pressed, turned or hidden :))
Sigh, it IS awfully quiet here!
Di
x
Posted by Di at 15:41