........stay out of the midday sun! Well, mid afternoon sun really. Yesterday was a scorcher so we scuttled back here for shade and cool drinks after a troll round the Sunday market in the Marina area. All questions about the 'beached boat' were met with shrugs and raised eyebrows so I'm none the wiser about that prospective 'venture'. Just as well since it seems that so many folk would be hanging over the sides wearing a shade of delicate green around the gills if we did have a crafting convention!

So, I played with my watercolours, did some reading and then just relaxed before cooking pork tenderloin steaks marinated in olive oil (not too much oil you understand, enough so it doesn't dry out) and smoked paprika. With salad and new potatoes it was yummy. I used to drag jars of Spanish smoked paprika back home each year until I found it either in Sainsburys in tins (on the 'posh ingredients' shelves) and then in Morrisons in their ordinary herbs and spices range.jars. Being loathe to buy umpteen jars of herbs over here I just pop a couple of spoonfuls of whatever I'm likely to use (Herbes de Provence, Smoked Paprika, Chilli flakes - for the boss - etc). into tiny little zipped polybags. I'm a sad little soul who loves trawling round local markets and such buying local ingredients and then playing at being 'Delia Smith' in the kitchen most evenings rather than eating out every night. That way, to me, it's the best of both worlds and I love the challenge of a different kitchen. Oh, and the barman is also very good :) A great favourite is 'Lazy Meditteranean Pilaff' and although I won't have a piccie of the finished dish 'cos we had that the other evening I'll try to post the recipe on here. I know, it's a craft blog really but this truly is one to share!

So, yesterday afternoon this was my craft area: 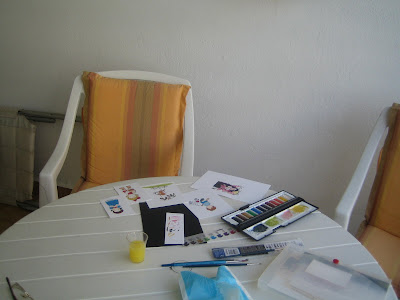 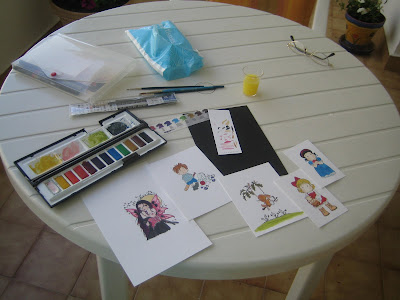 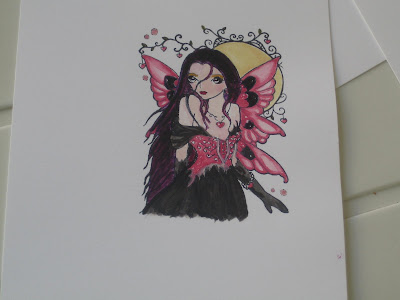 And before Sandra asks what the yellow cocktail in the little plastic pot is - it's water coloured with yellow paint! Must admit, it could have been egg nog by the time I'd finished! The images are a couple of Tildas (never been a favourite of mine due to the lack of mouths, but they do grow on you I must admit), LOTV Bunny on Swing and LOTV Boy with Cricket Bat...I just love the look of guilt on his face). My mostest favourite one though is the one I did a day or so ago - it's a Ching Chou Kuik design, made by Sweet Pea Stamps and to see some fabulous results do hop over to Sue's blog. The images all need tweaking with other mediums once I get home - and the favourite one (called Red Hearts) will be twinkled up for sure. I did more or less stick to the colours that the Red Heart image packet showed but there are so many possibilities here and they really are a delight to colour.  I NEED more of these!

That's it for now folks!