The last Christmas card of 2010 - Trinitage

Honestly - this is the last Christmas posting! But, I couldn't post before in case my OH peeked at this blog.

I thought this would be really easy to make but it took more fiddling than I expected. The card used a Jak Heath trinitage design - this one is a steam train in a festive Christmas scene. 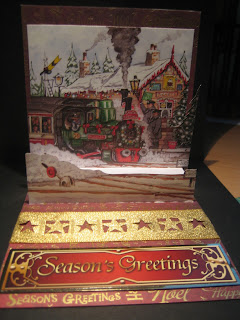 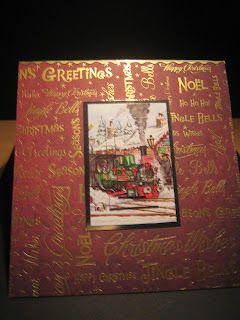 The A4 trinitage sheet even comes with a small pyramage image to put onto the 'front' of the card which is a lovely touch. I used dark red and gold script backing paper from my stash behind the pyramage and also on the inside of the card before building up the trinitage itself. But oops, they didn't send the instruction sheet (perhaps as I only ordered this one?) - however, there are some good tutorials out there - this one here was a lifesaver - and it's Jak Heath doing the demo so it's straight from the 'horses mouth' so to speak! The photo doesn't do it justice but the three layers do look pretty good! All I added to finish off was a band of of gold 'cut-out stars' ribbon from my stash which I bought in Germany earlier this year.

I suspect that I either used card that was a bit thick to make the little 'tubes' for the trinitage - or that adding the additional paper to cover the background was just a step too far. When it was eventually finished, I had one heck of  a job to get it to close so I could put it into a box or envelope! Still, OH loved it and that's what mattered but I notice that it's looking a little bit worn........betcha he's been playing and trying to work out how it was made :)

And this is the very last Christmassy photo: 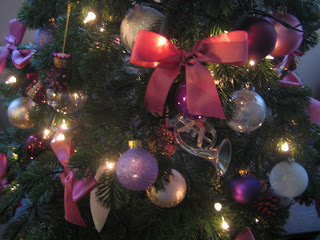 It's a small peek at our Christmas tree. My favourite decorations are a selection of  little clear 'musical instruments' decorated with pink ribbon and roses bought in New York a lot of years ago......one is lurking here under the pink satin bow. I know it's still a little while until Twelfth Night but every year when I pack the Christmas decs away I wonder what will have passed during the intervening year before it's time to unpack them again. This hasn't been such a good year and I so hope that 2011 is kinder - and I wish that 2011 is a good year for you too!