Tomorrow is one of my OH's g/nephew's birthday. I had to make a card in a bit of a hurry to catch the post but this is what I came up with: 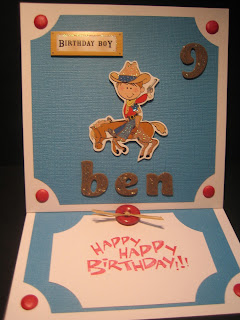 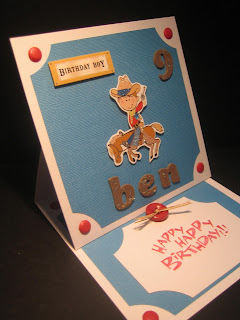 Thanks to a nearby Hobbycraft I grabbed a little set of toppers and some brown foam letters/numbers. Phew, no time to colour in an image - to my delight - so I had to make the trip :)  Mind you, the parking there is awful - just a little car park (some serious underestimating I suspect) and of course tons of folk going in just for a nosy as it's newly opened. Hopefully the novelty will wear off and us 'serious crafters' might get a chance to park without too much trouble before long. Loads of folk are just mooching and coming out empty handed......mind you, I think Pauline and I are working hard at making up the difference :)

It's yet another easel card, topped with Core'dinations blue card, the cowboy toppers (and I have enough left for another card due in a week's time), the letters/number (glittered with stickles), some red card candy, a red button threaded with raffia and that flipping Happy, Happy Birthday stamp that I have to touch up each time. I must look for a decent one as I do like it..........no wonder it was in a Hobbycraft reduced tub ages ago :(

Yeee Ha - all done in the whirl of a lasso :) I'll be almost replicating this one for the second card. Thankfully that little chap is only going to be two as the cowboy topper I have left is riding a rocking horse! As Ben is now nine years old maybe it's time to dispense with putting his age onto cards - until the milestone ones at least.