Edit - Sally over at Crafty Salutations has two one-day tickets for Ally Pally (19th/20th September) to offer to one of her followers. You can go with a friend for one day or on your own for both days - it's up to you. All Sally wants is for them to go to a good home. My name is in the hat for sure - why not hop over and add yourself into the draw by 3rd September if you'd like to be innit to win it?! You just need to be a follower and leave a comment - plus Sally's blog is a fun place (she's a great card maker, especially backgrounds and scenes - swoon!).

Back to the weekly blog post about Playground antics now - so what happened there then?! 92 entries this week - wahoo!! I couldn't believe it, as fast as I managed to clear the commenting, more of you arrived - what a wonderful turnout - and also what a headache doing the picks!!

But before the picks, my snippets card this week was made using a lovely stamp that Elizabeth sent to me - the image was an absolute joy to colour: 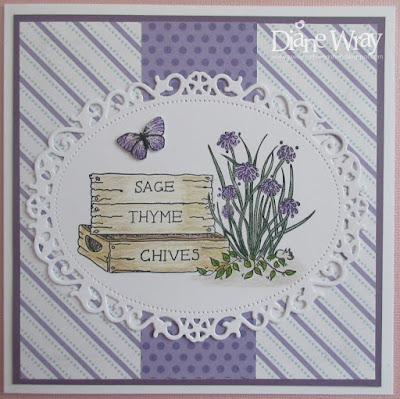 - a sheet of diagonally patterned DP from Wild Rose Studio's 'Wintry Christmas' paper pack, plus a long straight spotted snippet from the same pack - adhered down the centre just to break up the expanse of diagonal stripes

- instead of adding a little sentiment, I added a little butterfly from the Inkylicious 'Flutters 2' clear stamp set. Stamped using Memento Tuxedo Black' ink, coloured and blended as per the main image then tickled with clear Wink of Stella before being fussy cut and popped onto the image with a little piece of thin foam pad. It shimmers so prettily in real life

Let's hop straight into the weekly picks now. I've managed to 'twang' my back, happens on a regular basis, purely by twisting awkwardly. So, I'll type for as long as possible doing picks but might have to cut it a bit short: 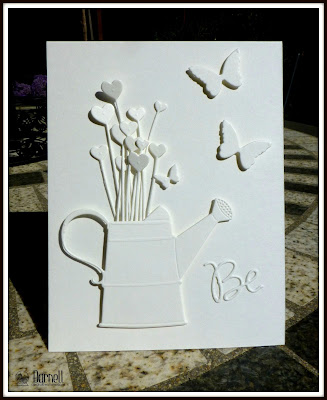 I picked this card, made by Darnell, as it's such a perfect example of white on white. It's lovely - and if you know about Darnell's NBUS challenges, you'll be pleased to know that there's another NBUS coming up really soon (September 8th to 18th) - a great way to finally play with some of your Never Been Used Schtuff :) 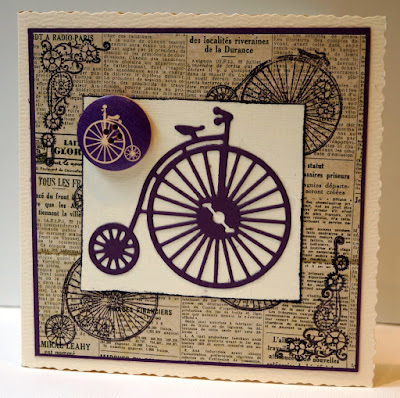 This great card, made by Jane, features a 'Penny Farthing' bicycle. It did cause a bit of confusion to one of our lovely USA Playmates, but Jane has explained it so well now in her post. I chose this card because not only did I love it at first sight but also because it's a perfect card for a chap and I'm aware that I don't tend to feature those as much as I should! 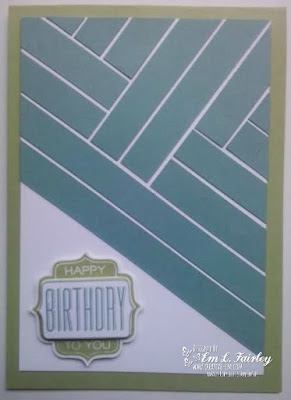 I chose this card by Em because the design is so eyecatching, and also what a fabulous way to use up 'snippet strips'! One to try for sure - I just bet mine wouldn't be as evenly placed though! 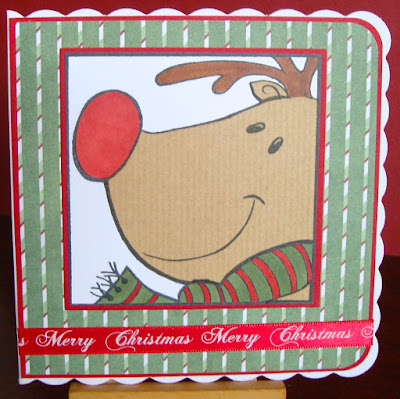 Our Kath ('Plain and Simple' blogspot) made this great card featuring Rudolph. It's a great card to begin with - but what a clever idea to use brown paper (from a paper bag) to paper piece Rudolph's face. Brilliant! 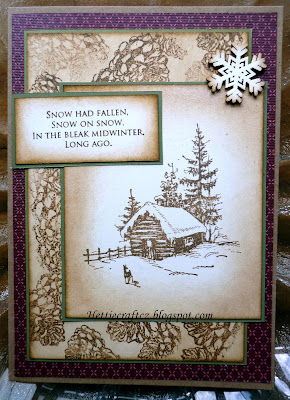 Hettie (aka Sam) has been busy doing other things lately but she did manage to hop into the Playground with this beautiful Christmas card - I chose it because I think it's really beautiful, plus Sam also stamped the patterned background layer. 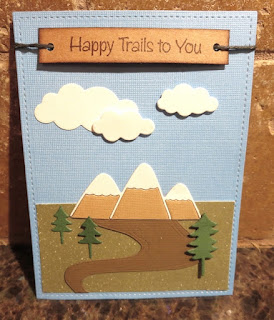 I'm so pleased that I managed to include a card from Karen (Ladd) at long last. For ages I've wanted to, but didn't think I could as Karen uses Flickr. The other day, when I saw this great scene, I sat and worked out that I could download it, then save it to my own hard drive and then upload it from there! Wahoo! It takes a bit longer than just the copy and paste I can do from blogs - but really happy that you get to see this great card! 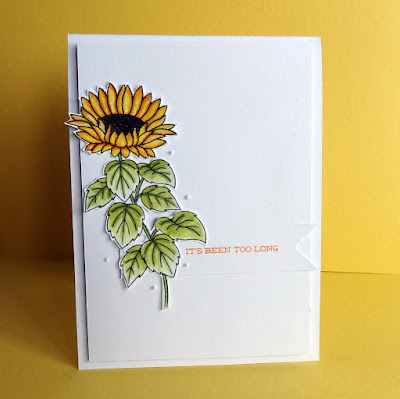 This is a perfect CAS card, made by Jenni. Fabulous water colouring and such a fresh looking card! I just hopped over to pick up the image and also the link back to Jenni's - and spotted that Darnell had predicted that this would be a 'weekly pick' in our Playground roll call! Too right - it's wonderful!

I know that loads of you have fallen in love with this gorgeous card, made by Sarn. I absolutely love it to pieces, wonderful colours, great design (isn't the sentiment perfect?!) and most of all I just totally adore how Sarn has used her Memory Box 'Modern Landscape' die by using the two halves in different colours. Genius! 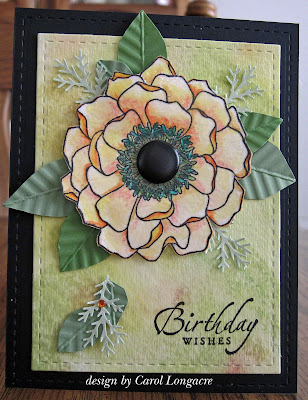 An awesome and very beautiful card, made by Carol. Quite apart from the fact it's a stunner with gorgeous water colouring, I wanted you to see those leaves. Such a great idea, made by using a crimper! Here's a link to a tutorial that Carol made for Operation Write Home - way back in 2010! 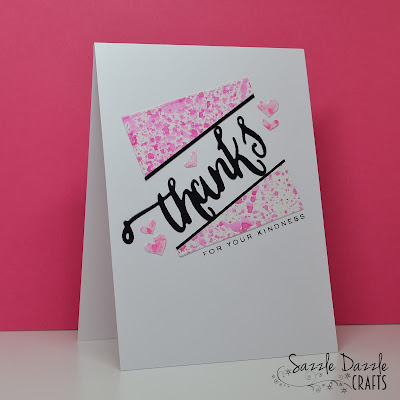 Sarah squeezed into the Playground just before the gates closed with this fabulous 'smooshed background' card. I think it's absolutely stunning - see how even the little hearts have been die cut from some of the background waste . Another of those cards which you just stare at and and wish you could come up with such a great design. I did giggle though, over at Less is More this week the challenge is to use sprays/mists. Sarah is of course on the DT and apparently managed to get spray (err) everywhere - including her walls!!

Little toot of my trumpet here - I was utterly delighted to be showcased over at Less is More on Friday with this card: 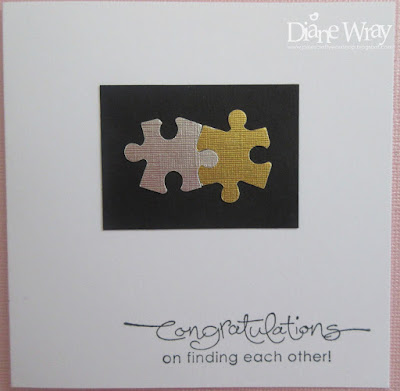 I worked out that I manage to get into the LIM showcase once a year - and it always thrills me to bits! Then, I was lucky enough to win over at Hazel's this week! Really ought to go and buy a Lottery ticket I suppose! :)

So there you have the weekly picks - and I hung on in there and managed to do 10!!

And we have a two new little playmates this week: 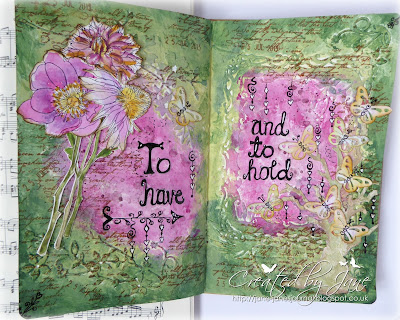 Jane J (I added the J as we already have a Jane) popped into the Playground twice this week. Her first 'show and tell' is this gorgeous journal double page - fascinating to see the 'step by step' as Jane made this too! I've often come across Jane's lovely blog when peeking at challenge entries so am delighted we have a new playmate! 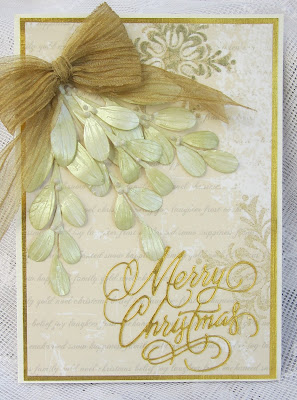 I've been a fan of our next new playmate for ages! It's Brenda of 'Floral Fantasies' - yay! I'm sure many of you know that Brenda works tirelessly running several challenges - including Stamping Sensations, Allsorts and Penny Black and More.
I totally love this card, so soft and gentle. Wonderful pale, softly sheened mistletoe and I truly thought at first that the sentiment had been stamped - in fact it's a wonderfully intricate Tattered Lace die cut!

Onto the draw for the Cheery Lynn 'Choo Choo' train die and the Memory Box 'Modern Landscape Border' die now - and our winner is:

Shaz in Oz
Well done Shaz! It's a while since your last win (about a year) so this was certainly due! I have your address and will post your prize off to you ASAP this coming week.

This coming week's prize is probably quite easy to guess - first of all it's a beautiful Molly Blooms cling 'Herb Box' stamp the same as I used today (Elizabeth sent one for me and one for the toy box - thank you Elizabeth - so, so much!). I think this stamp would be brilliant for any gardener, of either sex, plus I've added in an Inkylicious 'Flutters 2' clear stamp set the same as I also used today, 'cos it was knocking on the toy box lid demanding to be added in :) 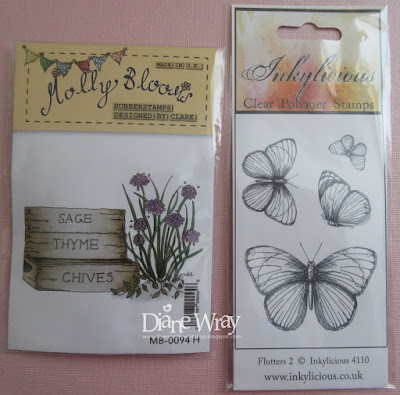 The Snippets Challenge will run for one week and the Playground gates will close at 11am UK time on Saturday 5th September. The gates will open again at midnight UK time on the same day.

Maximum of three entries and please say in a comment if you wish to play and be a possible winner of the prize. Also, if you already have one of them or aren't really interested in winning both of the packets of stamps but still would like to play for just the one - please say so and if your number is picked as the winner then I'll do a second draw for the other one.