At first my heart really sank when I spotted that the current challenge over at Merry Monday is 'Candy Canes', sigh.

This is the inspiration photo: 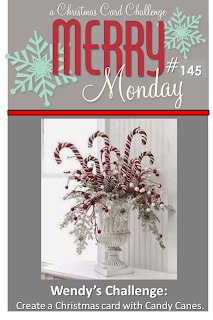 I don't possess a single stamp or die featuring candy canes and the one designer paper I found was just not doing it for me (too busy and too many other colours). Then I Googled 'candy canes' - do you know just how many free candy cane images there are to be had? Picked one, re sized it in GIMP (free software that I use mostly for my photos) - and off we went: 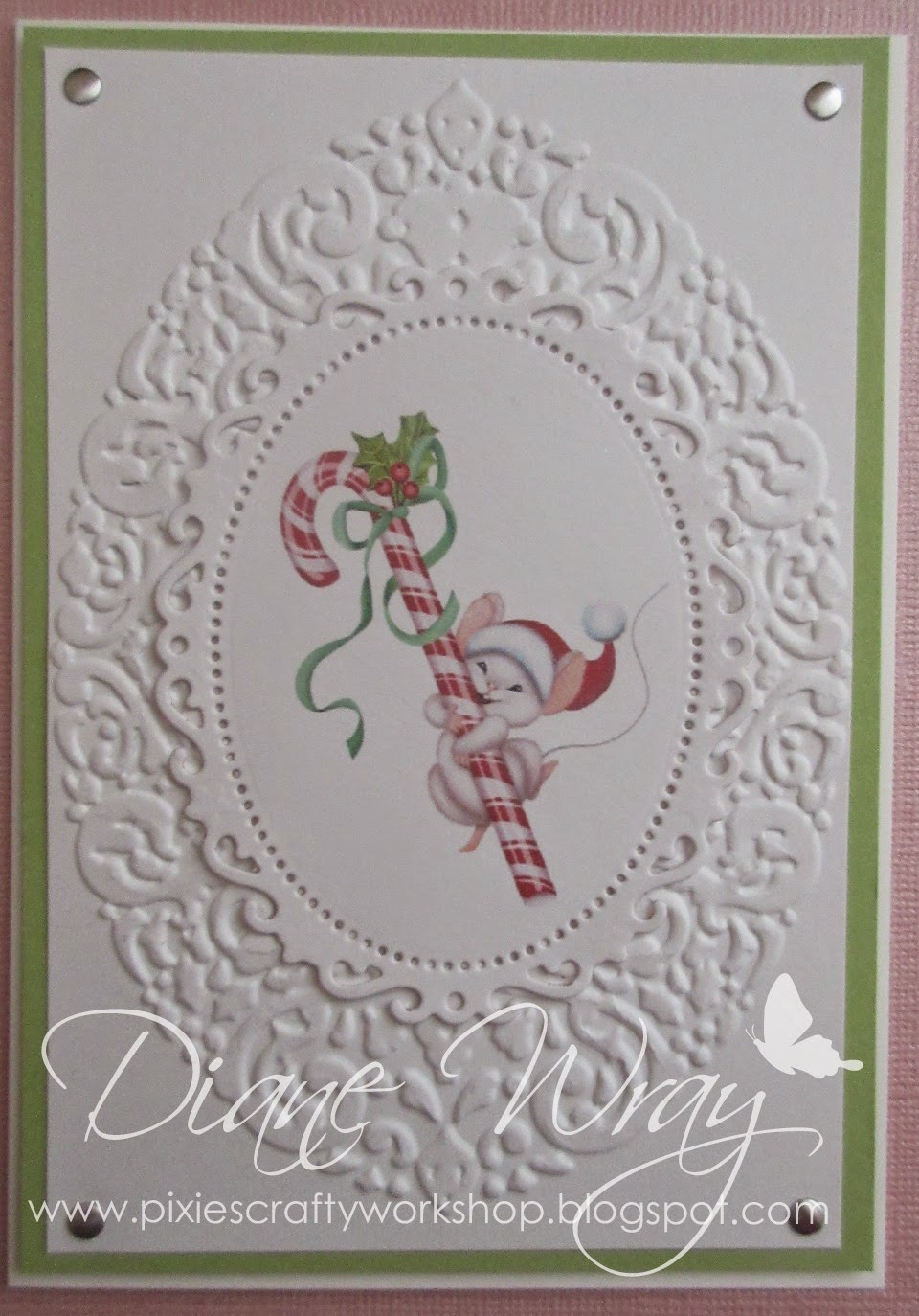 - the 'mouse with candy cane' image is free Clipart, which I found online. Printed onto white card after being re sized in GIMP as already said, then die cut using a die from the Spellbinders 'Floral Ovals' set

I managed to mess up Sunday's snippets post BIG time - mental note, be so, so careful when fiddling with HTML!! And of all people (given my programming background since aged 19 - child prodigy back in the dark ages when a computer took up a whole floor of a building!) I should know that!!!

But, although the picks and body of the post have gone and I'm really sorry I don't have time to re-do them, Mr Linky has been re-installed and your entries so far are safe plus your comments are still there- so if you've said yes please for the lovely die set, don't worry, that's all in hand.

It's all probably due to the threat of Iggy the Iguana arriving anytime now as a new playmate in the Playground. I'm absolutely terrified of lizards and don't even mention snakes - comes (with good reason) from living in the Far East for a few years. Once (about 15 or so years ago) literally stood up ready to jump into the river in Bangkok, whilst playing tourist, when some eeedjit draped a python over Len's shoulders as we floated past in a longtail boat. I still shudder thinking about the little smiley face, forked tongue (ack!!) and beady eyes looking over my right shoulder before I screamed, stood up  and prepared to abandon ship with a swift dive into the river. Tell you what - there were a lot of other people in same boat screaming at the same time as the boat rocked from side to side, snigger :))

I'm doing my best to keep up with commenting on your snippets entries, if I slip behind at times it's because we're busy fighting over the process of decorating our bedroom. Not had a tin of paint poured over me yet though - she says with fingers firmly crossed!

I'm so glad you didn't give up and found this delightful image, Di! It's perfect with the die cut oval and embossing! I hadn't thought to use the two together and they're perfect! Thanks for sharing with us at Merry Monday!

That's a darling little image, and your resulting card is just beautiful! Had that been me on the boat, I'd have bailed at the first sight of a snake onboard! YIKES!!

Enjoyed Bonnie's entry to this challenge earlier, and it's amazing how each of you did something totally different with the same 'candy cane'. I love this clipart, and have never seen it with the little sweet clinging mouse. Love that you've combined the very fav S/B oval with that lovely SU EF. A very elegant look fer sure. Now if you're having lizards come to visit the Playground, No Thank you. And if I'd been in that boat, guarantee you, I'd have been over the side. Once in a hair salon, saw an idiot with one draped over his shoulder, outside on the pavement. Asked the stylist if there was a back entrance. When she said No, I said "If that guy comes in the shop, there WILL BE! I am terrified of any kind of thing like that. Have told all my near & dear - if ever they find me stretched out - gone - outside in the yard, they will know exactly what I saw. Doesn't have to bite me, just show up!!! So please - no slithers in the playground!! TFS & sorry you had the HTML problem. Been there, done that, will try real hard, not to do it again! TFS & Hugs.

Beautiful card with a really cute image. Well done on finding a freebie image online to fit the challenge! Will have to remember that tip. :-)

Don't you just hate it when computers delete things you hadn't intended to lose? xx

Love the fancy background with the cute image--great card, Di!

Whatttttt? How did you find out about Iggy so soon? Oh come on now . . . who doesn't love an Iguana?

Must say you made a lovely card for the MM challenge. So sorry to hear you had probs with the Playground post . . . but all is not lost PHEW!

Are you turning your bedroom into a real live Art Journal then Di? Just saying in case paint starts to get thrown about!!!!

Lovely card Di and love your embossed oval and sweet image, Computers scared me to death I can do the basics and thats all!

Oh l'm eating those candy canes Di.....lol l'm loving your card l have a few of these freebies and your right there are so many to choose from spoilt for choice xx

Oh how cute Di and love the way you have framed the image witb that lovely oval and then added that really pretty embossed frame behind. Gorgeous! Sorry for your computer woes. Personally as soon as html is mentioned I tend to run off in fright. I just wish I understood it better. I hope you and your DH come to an amicable agreement on the decorating front, but I'm sure it will look fantastic when it's finished. x

What a cute image. I love the Spellbinder die on top of the embossing on the card. I'm off to look at Clipart. I hope that's a place. And it's free? Oh my, I've been missing out.

Love your cute image that you found. You did a beautiful job with embossing. Your card is gorgeous!!!

Absolutely stunning Di, and so cute.

Pythons plummeting from above does not sound like a good experience at all! Love the card--such a sweet find. What a great save to do candy canes.

I will be awol from the Playground is any, and I mean ANY, scaley or multi legged creature appears. This girl once screamed in Fiji because of the size of a moth that flew into the restaurant, it is one of the rare times that I have blushed deeply - I cannot do snakes, spiders, lizards or moths and I struggle with butterflies as much as I love them lol!
Beautiful card Di - love the die cuts and the image is perfect. Have to say the HTML stuff goes right over me head so I don't dare try anything Karen x

Such a cute image you found and you framed it just beautifully! :0)

So so cute Di, I love the adorable image you found and I love the simple layout you used to showcase it. Thank you for joining us for Merry Monday.

So very cute, Di! So happy you found this amazing digi image. Thank you for joining us at Merry Monday!

OMGosh Di, this card is beautiful!!! I love the clip art image of the little mouse with his prize, a sweet candy cane! Can't believe that was clip art! You have featured this little cutie perfectly on that SB die and then on top of the embossed background. Love the green mat as well, it's just perfect to showcase this beauty!! Oh no, I'm glad it happened to a computer savoy person like you and not a non savoy person like me! But I'm sorry that it happened at all. Yikes, I would be with you on the python! I don't mind ordinary snakes, but don't put those squeezers any where near me!! Nope, I don't like water but that would have been one time I would have dove in the water too. lol I hope all goes well with the bedroom redecorating too! Hugs, Brenda

I love that little mouse image - so cute! And your diecut and embossing accents are fabulous!

Di, This is a beautiful card. I loved the idea of embossing with the Holiday frame and then stamping your image onto a floral oval die cut. How ingenius! You have given ideas to me. That's what I love about these challenges, are new ideas!

I'm so glad you were able to find this cute & adorable image to add to your card and our challenge! Thanks for joining us at Merry Monday this week!

This is so sweet! Love it.

This is so cute ...... love the embossed and due cut frames around the image. xx

Such an adorable image and a fabulous CAS card. Thanks for sharing at Merry Monday.

This is a fabulous Christmas card, such an elegant design.
Thank you for joining us at CHNC Extra Challenge.
Pauline
x

Yay, DI!! Congratulations on the well-deserved HM honor from MM for this elegant and lovely candy cane card!! Enjoy your day! Hugs, Darnell