Mrs A and I set out for the NEC Birmingham Hobbycraft Show on Sunday at the 'crack of sparrows'. This is what greeted us as we walked into the show: 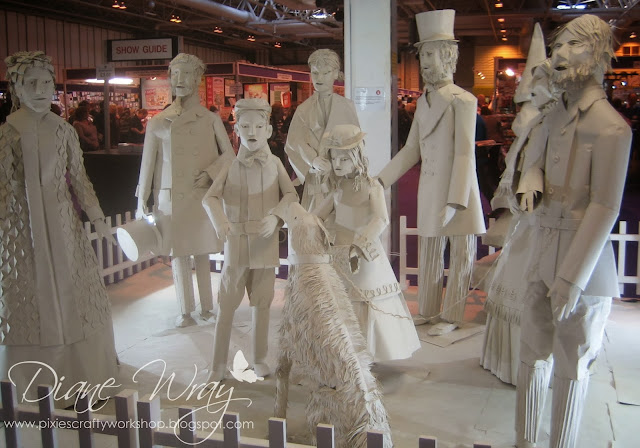 The most amazing life sized tableau, entirely made from paper - bet there were a few snippets left after making this fabulous exhibit! The fur on the dog made you want to reach over and stroke him :) After that I totally forgot to take any more photos - there WAS a lot going on and it was almost overwhelming to see so much in one place.

We had a brilliant day filled with a lot of laughter and managed to snag ourselves quite a few excellent bargains as well as doing some 'craft celebrity' spotting.

And needless to say, the day didn't pass without incident(s). Mostly Mrs A and I share purchases when it's an offer like 'buy six items for £5', or more items for more money of course - a great way to maximise your pennies without breaking the bank or ending up buying things you might never use just to get the 'deal'.

So, there we were at Joanna Sheen's stand, selecting shared goodies and all of a sudden mayhem broke out. Both of us were squealing 'No, I want to treat YOU this time' and scrabbling for our purses/wallets - and it turned into a minor Playground fight. You know the sort of thing, when little girls end up lightly slapping one another with hands and arms flying like windmill sails, trying to beat the other one into submission. Sadly we totally forgot where we were and it almost turned into a wrestling match - until we realised that two 'supposedly' grown women were making heads turn whereupon we just collapsed into hysterics. Only then did we turn round to see Joanna chuckling at the spectacle :( And she did observe that the same thing happens when she goes shopping with her sister.

Later on there was another tug of war when I wanted to carry stuff for Mrs A, her back ain't good right now, and we almost got to the point of ripping a canvas bag in half :) More hysterics of course - somehow we seem to just forget being grownups when we both get let loose to play!

It's funny really, other bloggers think we're both fairly quiet in real life - certainly not the case on Sunday! A fabulous day - and I'm still laughing here about it. Thank you Mrs A for a GREAT time, and mostly just for being you :)

Our next outing is to Bath's Christmas market in a few weeks time -watch out Bath!!

and that wasn't the end of it neither cos when we got to the Visible image Stall Mark pointed a finger at us and said 'I remember you 2 from the Newbury Show'!!!!! Oh dear notoriety precedes us. Praps we will just wear brown paper bags over our heads when we go to Bath!!! Had a fabby time Miss . Your the best.
Hugs your partner in crime.

I'm so jealous! I used to go to this show every Spring and Autumn when I lived 'just down the road a bit'.In later years my sister came up from Bournemouth for it and we had the sort of days you described! Glad you had a great time. The tableau is amazing. Kate x

Sounds like your girls had a fun time!! :) I can just imagine the ruckus and all the onlookers wondering about these crazy crafters!

Am pea green with envy, lol, and smiling at the idea of the two of you tussling xx

Somehow I knew there would be great fun during this outing. Question, which blogger thinks either of you are quiet? Have they read the goings on on the playground? Having fun is contagious .... I'm sure everyone lightened up because of the two of you. What an amazing tableau. I'm glad you shared the photo. Thank you. Now to read Mrs. A's version.

Sadly Mrs A. your paper bag will not suffice to hide such well known squeals of delight or perhaps result in a conflagration from vain disputations over items, etc :D..

Glad to hear you had a fun time with bargains to boot! The paper sculptures look amazing! Cathy x

Tee hee Di .. .. sounds like a fabulous day was had. Nothing better than a giggly girly day out! My lovely Sis and I are well overdue one such day!!

I notice you haven't shared your purchases!! Is that because the "in house critic" doesn't know about all of them?!?!? LOL!!!

Hope you have a good week.

Oh I really giggled at what Jules said above. I think both Mrs A and I smartly stored our purchases away by lunchtime yesterday .............. all purely in the interests of neatness of course. I also ate my receipts!

Mmmm, lovely, Receipts with Chocolate Sauce - delish! I can just see a recipe looming on your blog for this treat! Well done Di!

Chuckling at your exploits.
Amazed at the paper display.

Quiet? You two? Only for about a nanosecond! Then look out world. I'll warn Bath for you!

So glad you had a good day out.

So glad you enjoyed it Di! I must admit I did too cant wait for next year! we must meet up then
hugs
laney

Hi Di! Sounds like you had a great day. I've been there 2 or 3 times. I would definitely agree with you to take a friend along to share all those bargain goodies! Might have to arrange another trip next year. Have a good day! Julie x

Fabulous tales - and sometimes remembering things like this is just as good as being there - what am I saying - no getting the goodies home is the best bit LOL... lucky there was no sheet music to haggle over... brought the memories flooding right back... Mxx

Sounds like the pair of you had a fantastic day out.
Hugs
Caz x

Marvelous !!! I am so glad you had a great time and got goodies AND had a laugh... I wish I could have been there :-(
Ooooh !!! Bath .... I went there years back for the Chrimbo market.... Awesome !!!! Enjoy that one :-D
Hugz
IKE xxxxxxxxxxxxxxxxxxxxxxxx

You can't beat a crafty day out with a mate - lots of giggles and lots of fun :) It was the same for me when I went to the Glasgow show with my daughter, although that's on a much smaller scale. The paper sculptures are amazing! Enjoyed reading about your experience :)) Hugs, Elizabeth xx

You two! You cannot go anywhere without responsible adult supervision can you? I am with Mary - which blogger indeed!!
Now what date are you going to Bath? You know that you will be expected to show a modicum of decorum there don't you?
I am going myself and just want to see if we clash! Can you imagine Mr Hettie's face if we all got together!!
Hugs
xx

I see nothing out of the ordinary in this post! In fact, as you're not currently locked up or on national tv, I'd say the day went off pretty quietly! Love the paper people, amazing.

Hi Di,
sounds like you had a really great time.
Love the paper Peeps. there was nothing like that when I went in March this year. Or did I just miss them, as I couldn't get round everything.
Lots of crafty love. Jenny L.

What a fabulous tableau! Sounds like you two had a fun time and won't soon be forgotten!

Oh my, it sounds like a wonderful day! Your description of the 'tug'o'war' really makes me laugh!

Wish I could have seen this, too - amazing picture! Sounds like you had a really fun day!

Well to be quite honest, better than I expected, I had my fingers crossed all day, great photo, must have been a sight for sore eyes.

Did I enjoy reading about your fun trip, and laughing at the mental picture of you 2 ladies in such spirits, and onlookers thinking you were totally kooky. I wish I could have been there with you! Can't wait to see all the fabulous stuff you found & will have to pop round to wish Mrs. A healing back. Ain't no fun when your back hurts. Glad you both were able to have a fun day's outing. TFS your day with us. Hugs

What a fun post, Di! I could perfectly visualize the two of you, young tow-headed girls in pigtails, little petticoats swirling as you tussled over who would be the nicest! But I want to hear about the peeing. When my sisters and I enact these exact scenes, when the hysterics part kicks in, so do the weak bladders! Such are the not-so-fun parts about our real ages, even though inside, in our hearts and minds, we are always somewhere between 5 and 35, never older!!

Wish I could be there for Bath!! Hugs, Darnell

So glad you had a good time at the NEC.
Watch out Bath indeed!!