If there's a drought and water shortages next Summer, I'll scream! The rain here has been unrelenting for weeks and there's a permanent dampness in the air. Despite the house being warm, the humidity levels are up and down, which isn't good for arthritis. Poor Dudley, never a fan of going to the toilet in the rain, is so fed up and has become an expert in crossing his legs for as long as possible!

One rainy afternoon I made this snippets card: 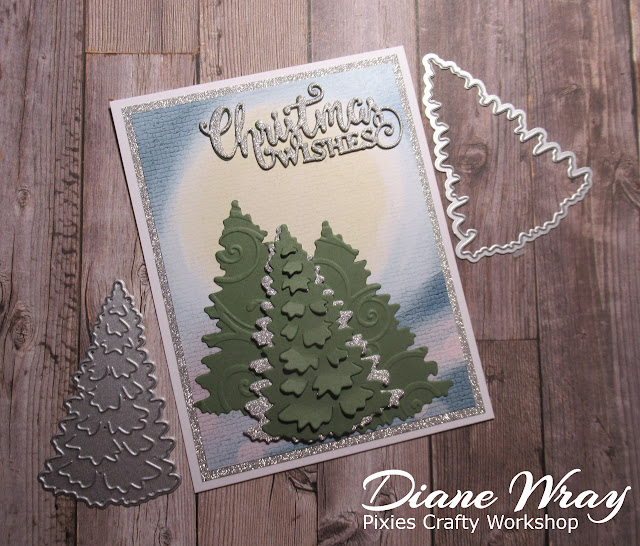 - snippet of silver really super-sparkly card, trimmed to an eighth of an inch smaller all round than the card blank and glued in place using Collall All Purpose glue

- a sheet of DP from the NBUS Fairy Hugs Craft Papers 'Misty Whisk' paper pad, trimmed to an eighth of an inch smaller all round than the sparkly silver layer and glued in place using Collall All Purpose glue

- the centre tree was die cut using the plain outline die and a snippet of the sparkly card, then topped with a 3D effect die cut tree using a mossy green snippet of card - of course in real life you can peek at the card at an angle and see the silver layer twinkling at you!

- glued the three layers together using a glue pen and added the sentiment to the top right hand corner of the card - finished!

Such a shame the super sparkly silver has once again defeated my camera - there are hints of it here and there so perhaps you can imagine the rest. ☺ The patterned paper pad I used has some interesting abstract designs, mostly featuring the sun or moon on the front with co-ordinating abstract patterns on the back. I was idly flicking through the pad when this particular paper shouted 'use ME' and I remembered the NBUS Christmas tree dies. And so a card was born!

I'd like to enter this card into the following challenges:

Christmas Kickstart #68 where the theme is 'Trees, Trees, Trees!' Such a lovely theme, must try to make a second entry if I find some time.

Allsorts Challenge #703 'A/G with option trees/leaves' - that was a bit of luck!

Dudley Pupdate: Earlier in the week, Len gave Dudley Part 1 of his trim - his legs and 'undercarriage' still need to be done. I suspect I'll have to perch on a stool opposite to Len and hold Dudley on the grooming table on his hind legs like a boxing hare, facing Len to have his undercarriage done. Right now he looks adorable - and his trimmed areas are so soft and silky, very much reminds me of when he was a little puppy. You know that little groove that doggies have running down the centre of their skulls - it's much more exposed now and he adores a gentle stroking there! We suspect he's feeling the difference due to being 'shorn' as he's taken to sleeping most of the night snuggled between us on our bed.

The Results from Challenge #440 are now up and running in the Snippets Playground - and there's still a week left to join in with Sarn's current challenge #441. Hop over to the Playground pronto - Sarn is sure to have something nice in the way of warming food and drink to share at break times in the tree house.