I've been playing with some NBUS goodies once again, in an attempt to start using and stop buying stuff! That's the problem with the Snippets Playground, new things are always popping up!

I'd like to enter Scrappy Mo's Rudolph Days Challenge for June (it runs to the end of the month). Other challenges I plan to enter are listed, with links, at the end of this post: 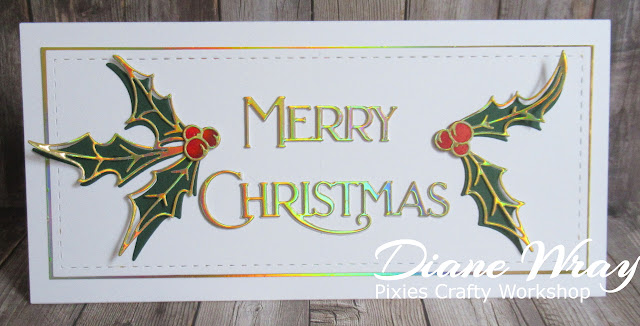 - the white panel was die cut using a die by Creative Craft Products from their Slimline and DL Nestabilities range, called 'DL Stitched Straight Edge' die set - I used the second largest die in the set

- glued the die cut panel onto a onto a backing of very slightly larger Tonic 'Inca Gold' mirror card - then the whole panel was glued onto the card front and set aside. I wanted to keep the gold border as thin as possible to live in harmony with the gold 'skeleton' leaves

- used snippets white card and more snippets of the 'Inca Gold' mirror card to die cut the sentiment - two white layer topped with a gold one. The sentiment die set is certainly one that I spotted one or more of you lovely 'enablers' (Greta, Lynne?) using a while back and I rushed straight off to go onto a wait list until it came back into stock. It's by Poppystamps, is called 'Merry Christmas Poe Script' and I LOVE it!

- added all the elements to the card, using the same fine glue pen plus some thicker adhesive for the solid parts of the holly and the berry clusters

Being a glutton for punishment, I made three at the same time. Yup, the Christmas 2022 stock is building up really nicely!

I'm very happy with these cards - the set of dies also comes with a poinsettia - which is lovely as well but somehow the holly stole the show for me! I have a plan for the poinsettia die - which might be best done sooner rather than later, whilst a few things are still left on my desk from the previous session.

One really neat trick I picked up from watching videos recently is an easy way to find and mark the centre of your work - for example I needed to find the centre of the width (from one side to the other) of the stitched panel to add the sentiment. So, I used a narrow strip of scrap card, cut it to the width of the panel and then folded it in half matching the two ends and make a nice crease line at the fold. Then just place it across the panel width and the crease line is your centre point. Mark a point using a soft pencil (easier to erase later on) and  then use your T-square to draw a fine line down the exact centre of your work. So simple and so much easier than struggling with tiny fractions of measurements on a ruler! I have a feeling that I've seen both Jennifer McGuire and Ann  Melvin showing this trick and it's so simple yet infallible!

Now, along the way I also discovered that there are Craft UK DL cards and envelopes and there are large 'slimline cards' (possibly USA?) - and they differ in size. I won't go into all the detail but the large slimline cards are taller and yet narrower than the shop bought Craft UK DL cards that I've been used to. Just a little word of warning to be careful when buying large slimline dies and make sure you check the measurements. I now have a set of the taller slimmer dies here (mine are made for the USA market), for which I'll have to make not only the card bases but also the envelopes to match. No matter, I'll do it but mentioned it as it might save someone from making the same mistake as I did.

Darnell's NBUS #39. The Poppystamps sentiment die set and the Sizzix 'Seasonal Sketch' dies were both having their first outing.

Four lovely ladies will be receiving my 'ephemera' such as flowers and fancy embellishments, just as soon as I manage to sort through the boxes and then package stuff to send. The offer is now closed.

Pupdate - I thought there wouldn't be anything much to write about Dudley - in this recent heat he's spent a lot of time finding places to stay cool. However, the other evening it was time for his bedtime treat and I was sitting here at my desk when Len passed the 'much treasured by Dudley little bone shaped treat' over to me so I could give it to Dudley (we try to take turns!). And then we began to talk about something totally unconnected with Dudley and his 'treat' whilst I sat sort of waving the bone treat absentmindedly whilst illustrating a point to Len. And Dudley was beside me, obviously becoming irate as, all of a sudden, up he stood on his hind legs and firmly slapped his paw flat just like the palm of a hand onto the arm of my desk chair as if to say 'Excuse me Missus - I'm down here, still waiting for my treat'!! Len and I just looked at one another and said 'Did he really just DO that?'. Whereupon the little scamp stood up on his hind legs and did exactly the same thing again!! Nothing like a resounding slap of the paw to gain attention - and of course his treat! He does know to give his paw to say 'please' when he's asked - but this was more like a demand. ☺

And last but certainly not least - Sarn has posted the latest Snippets Playground challenge HERE. She's made a duo of lovely snippets cards and has a great prize on offer. And no doubt she will be dispensing some lethal concoction in the tree house!