What a joyful weekend this is to celebrate 70 years of our Queen's reign. Our house front is all decorated and we're doing our bit to show our loyalty and thanks, to the Queen.

My card today was made to celebrate this a wonderful occasion, and to honour our Queen. I believe that our lives have been blessed by her steady hand steering our United Kingdom for such a long time - often through choppy waters: 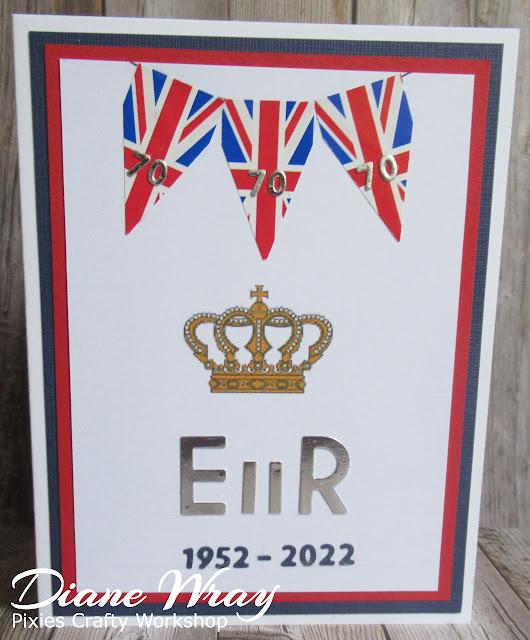 - then I found a 'freebie' crown online, resized and printed it onto white card and set aside for now

- then it was time to fly! So I glued the pennants/bunting in place

- die cut 3 x numbers '70' in silver using a Tattered Lace 'Mini Numbers' die and silver mirri card, before gluing them onto the bunting

- glued those into place and then it was done! It's so hard to centralise when a string of letters or numbers are different widths - but I did my 'bestest'

The Red Arrows aerobatics team almost took our roof off on Thursday on their way to fly over Buckingham Palace! We didn't see them sadly - and they were gone in a flash anyhow. However, TV coverage of the whole weekend has been quite overwhelming and, whilst the atmosphere of actually being in London right now will be incredible - you do see more on the TV!

And here is Dudley Dog - showing off his Union Jack Bandana - looking up at Len standing behind me. He (Dudley) has been proudly wearing it for his walkies over the celebrations.

He's not really a dog for posing and this certainly isn't his best angle - he was sitting nicely but it makes him look like a round dumpling with teensy legs. Yes, he does have a sweet little wonky lower front tooth which doesn't normally show. We think it's endearing and makes him look somewhat vulnerable - but then, we're also rather biased: 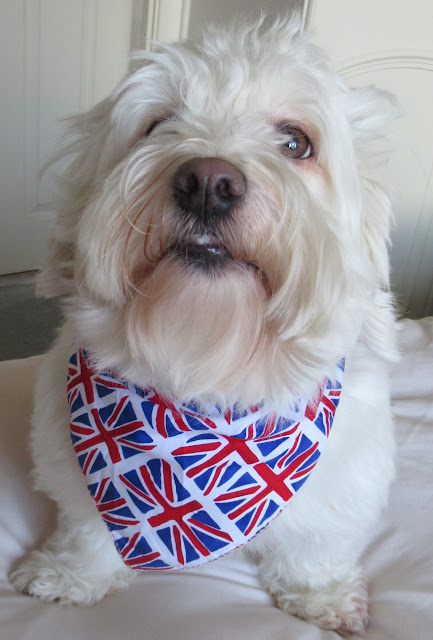