Snowflakes and a snippet

I've wanted to enter the Christmas Kickstart Challenge #60 from the beginning of the month - the theme is 'Snowflakes are Winter's Butterflies'. So it had to be a snowflake, or several  - and it's also my snippets card for the new Snippets Playground Challenge #424 - over HERE: 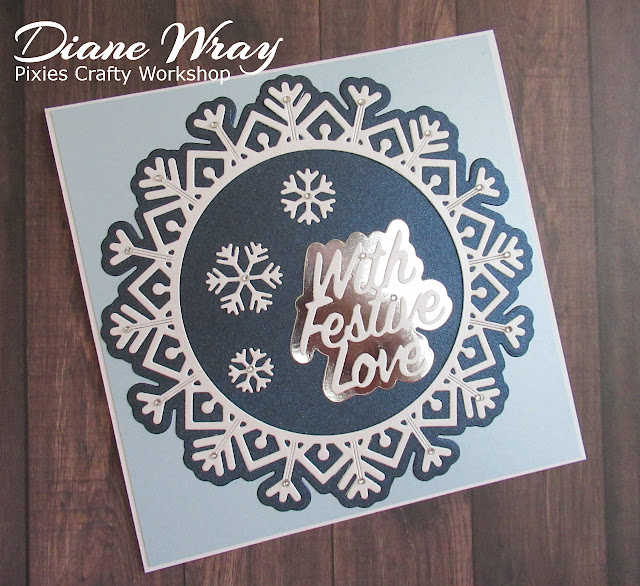 Ha, ha - without me swinging from the ceiling - you also got me wearing a red top reflected in the mirri card! I tried believe me!

- 6" x 6" square white card blank - tent style - snigger, purely as I glued the final elements on with the card not sitting in front of me as a side opening one, but I actually like it!! Could have been top opening so I did OK really - phew

- piece of baby blue pearlescent card stock, just slightly smaller than the card blank, glued in place and it is even on all sides, dratted camera is determined to cause issues if it can

- first die cut the midnight blue pearlescent background, and set it aside

- reverted to my small Altenew die cutting machine and used a snippet of silver to cut out the backing for the sentiment. Then used leftover white pearlescent scraps, from the centre of the cut out circle, for the actual sentiment and three snowflakes. Very little was left over!

- assembly time! Just glued all the layers in place, using Collall All Purpose glue for the large midnight blue piece and a glue pen for everything else - bit fiddly at times

- for a finishing touch I added some teeny clear gems around the snowflake border, to the centre of the three separate snowflakes and also to 'dot the i's' in the die cut sentiment - just because I felt like it!

I originally spotted a very similar die set over at Jules' blog - a good while ago. Needless to say I couldn't track the set down and so sort of gave up for a while. Suddenly, a good few months ago, a similar enough one popped up in an online shop and greedy little pig here had to have it. And also a more Summery one, which will be a future Playground prize as I managed to get two of those. But I need a rest before going down that road again

The first shock was a sheer size of the set of dies, in terms of dimension! You need almost a 6" square background/card blank before you get going. I rarely make large cards so that was my first challenge! In the end I just used all the dies included in the set - putting other ideas to one side. At first it seemed quite limiting and I did wonder if I'd been sold a 'one trick pony', to coin a phrase! However, I do think that, as Jules did on one of her later cards, the snowflakes frame is just so perfect to put round an image. I also fancied adding a round snowflakes shaker element in place of the sentiment - but I went with the flow and stuck to the set of dies whilst ahead.

This is my snippets card over at the Snippets Playground. The prize this time has no connection to the above card - but there's some really exciting news! Whooooosh - byeeeeee, you might have at least read to the end of this post!

I'd also like to enter this into Darnell's NBUS Challenge #36 for March HERE - the set of dies was most definitely NBUS!