Card for the Allsorts Challenge - and a new gadget

First of all, my goal is to enter as many Allsorts Challenges as possible, still bearing in mind that Christmas cards are also a priority - besides the Snippets Playground of course! It's been so heartwarming to read all your lovely comments about Sarn and I joining forces to run the Playground - happy times ahead!

The current challenge over at Allsorts Challenge #668 is 'Feminine' - and flowers sprang to mind here: - piece of the same white linen card to die cut the frame with flowers - called 'Tatty Layers - Lily Rose Panel' by Lisa Horton. The frame can be used without the flowers as a backing for images etc. I know it was one of you lovely Playmates who pointed me in the direction of the Lisa Horton frames with flowers - thank you!

- then glued the frame, with the flower outlines attached, onto the card front, using a fine glue pen

- stamped the sentiment using the Misti, my 'new gadget' - see below, Memento 'Tuxedo Black' ink and a sentiment from the Hero Arts 'Live Life' set of stamps. Sadly, despite being properly stored, the stamps have a slightly yellow hue and are also becoming rather pliable. They're many years old and owe me nothing but I'd be sad if they do become unusable

- and then, as it so often does, the 'red mist of crafting madness' descended upon me and Dopey here decided to infill all the die cut flowers - piece by flipping teeny, tiny piece!

- used one piece of paper from the fabulous Craft Consortium 'Ink Drops - Vivid' set of papers - mostly pink shades on one side and mostly yellows and a touch of green on the reverse, just to add a bit of a varying shades element

- 24 hours later - no kidding - it was finally done! Possibly one of the most fiddly things I've ever tackled. The frame just as it is, or with only the inclusion of the die cut floral outlines, is far better for one's sanity, trust me!

I did show the result to Dudley and it was fascinating to see his reaction. His eyes flicked from one side to the other and up and down, repeatedly - taking in every little detail. I suspect he could actually detect stress vibes coming from the card -  he had been party to a few choice words whilst trying to sleep at my feet during much of the process! If he could talk human talk I bet he would say 'Bonkers, Mama, totally bonkers!'.

And the 'new gadget' shown in the main photo above is something that's interested me for a while, since seeing brief glimpses of Jennifer McGuire using one in her more recent videos. As I have arthritis in practically every moving part of my body (apart from my tongue - which does its best to compensate!) - even using the Misti when making a batch of several cards at once gives me wrist ache. So I hunted all over the place and eventually found this: 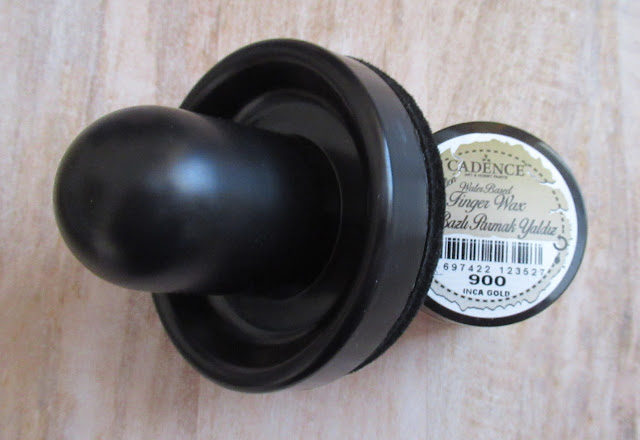 Ignore the pot of gilding wax, used to prop the tool on its side for a better look (mind you, it's an absolutely gorgeous tone of gold!). Basically the new gadget is a 'Stamping Pressure Tool' - if you're interested in the link then just drop me an email, it took me a lot of searching to find this exact product - with a few blind alleys on the way. It was much cheaper than the one or two branded pressure tools I came across - so long as you can wait for 10 days or so  for it to arrive. It's 3" in diameter and comes with a black self-adhesive felt pad to attach to the base. You then just rub it over the lid of the Misti for a nice even print. And I already love it!

By the way, I've never played 'table top air hockey' but the tool basically seems to be a replacement 'pusher' - someone obviously was quite switched on!

I'd also like to enter this into Darnell's NBUS Challenge #36  for March HERE. The set of dies and the 'Pressure Stamping Tool' were both having a first outing.

If you need me, I can be found wandering around the shrubbery at the local 'Funny Farm'! Gently muttering 'Never again, teeny, tiny die cuts, never again'.