The sun has got his hat on 'Hip-hip-hip hooray' - washing is out to dry (Saturday as I'm typing this post), we have a grocery delivery arriving late this afternoon and all is pootling along fine in the Playground here. How about you? I hope everyone is well and coping with this long lockdown slog.

The unsettling part is that more people are ignoring the 'rules of the game' and taking several outings a day, not watching social distancing as much as they were - and there seems to be a growing feeling of 'Enough - now I'm gonna break out'. All I can say is that it will be on their own heads if they do! There also seems to be a bit of an attitude of 'it only affects the elderly'. Don't they watch TV or listen to the news at all? The Darwin Awards keep springing to mind - this statement sums up the criteria for being given a Darwin award perfectly 'They contrive to eliminate themselves from the gene pool in such an extraordinarily idiotic manner, that their action ensures the long-term survival of our species, which now contains one less idiot'. But, the difference is of course that they're also affecting others by potentially spreading the virus.

The converse of course is just how many people (on top of the NHS, carers, emergency services, supermarket workers etc.) are pitching in to help out - for no financial gain. So there are two sides to the coin - and it's much healthier to focus on the good rather than the bad side.
Rant over - oooer, I do feel better for that ☺

Let's move straight into this fortnight's picks - which all struck me as so appropriate given the current situation - smiles, hugs.......... and an outright hoot of laughter at the last one: 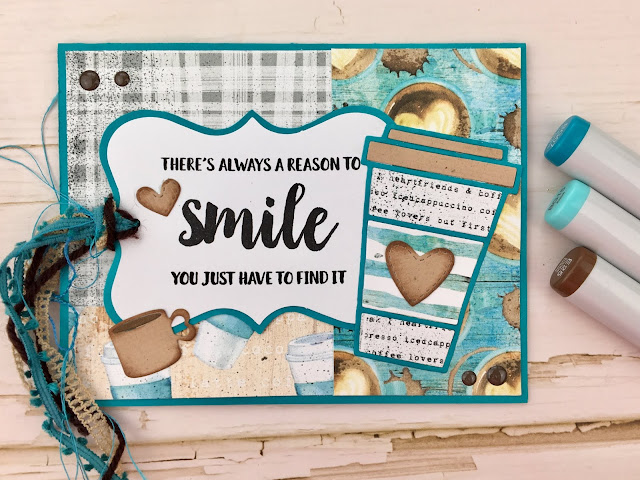 Meghan made this beautiful card - who could fail to smile at the wonderful colour combinations and all those snippets used! I love it. 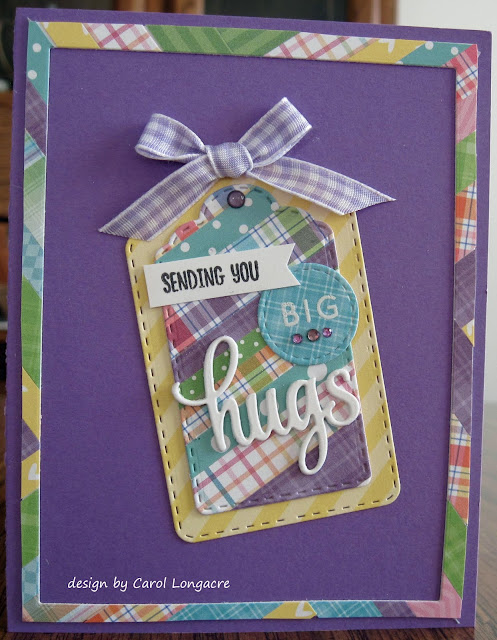 No apologies from me for choosing another card made by Carol L! Carol always uses snippets so imaginatively and the frame on this one is actually the leftovers from making a herring bone technique panel for a different card. Waste not want not - and herringbone is such a great way to use up little strips of snippets as well. 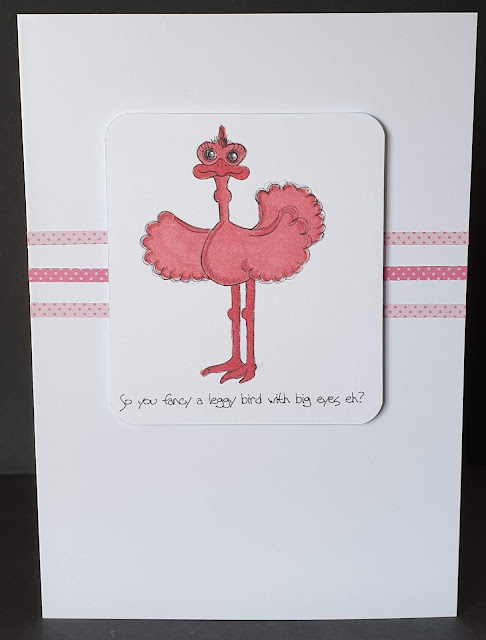 I just burst out laughing when I spotted this brilliant card, made by Nicky for her hubby's Birthday. You absolutely must hop over to read Nicky's blog post and find out the remainder of the sentiment inside her card - I cracked up even more. And, what impact those three snippety strips add to the card, as well as that hilarious bird!

One new Playmate this time:
We had 52 entries in total, including Angie's lovely and very dimensional card above. Welcome to the Playground Angie - come back again soon!

Now for the prize draw, which is for Concord & 9th's 'Woven Plaid Background' stamp set plus a Woodware 'Celebrating You' set of sentiment stamps:
Kathy Asper


Well done Kathy - I'm sure it's absolutely ages since you had a win! So pleased for you. Please send me your address, with your full name at the top as well, for speed, ease and, confirmation that you still would like the prize of course. Please put Playground Winner or similar in the subject line of your email in case it drops into my junk mail. Email address is on RH sidebar as always.

I've already said, during this lockdown I'm keeping well away from the Post Office, in fact well away from even venturing out at all so even UK prizes are building up a bit here. All in good time though - I keep very careful notes and you will receive your prizes just as soon as it's deemed OK to post them off to you.

Remember folks, there's still almost another week to run on Challenge #376 - you can find it HERE. The prize is Pink & Main's double die set called 'Hugs'  and the set of complementing sentiments called 'Hugs Needed'.

Dudley is still doing really well. He absolutely floored us one evening this past week though - needless to say I wasn't quick enough to take a photo of him. Cutting a long story short, he adores a marrowbone, which has been filled with some sort of chicken gunge - he'll spend hours licking at one, although they're a fairly rare treat. Len came up with the bright idea of scalding the one he'd licked to death and then once it had dried out again, filling it with a particular chickeny dog food that he won't eat. We have three unused packets of the stuff, it's the same consistency - so it seemed a good idea at the time!

When Len produced the filled bone from behind his back, Dudley was up on his hind paws in a shot, tail wagging.  Then he hopped onto the sofa Len was sitting on for a closer inspection. A couple of sniffs as Len offered the bone to him and he looked plain horrified. 'Come on' said Len ' try it'.Whereupon Dudley promptly and very pointedly turned his back and sat on the sofa with his face up against the sofa back. And he wouldn't budge! We totally cracked up and still have a chuckle when we visualise the whole scene - talk about making your distaste known!

It's been a while since Dudley was weighed - it was a regular thing for him to hop onto the stand on scales in the local Pet Shop or our Vet's. We did think of one of us getting on the bathroom scales, with and then without him in our arms and then working out the difference. However, Len came up with the idea of using our luggage scales instead - so earlier, just before his walk, here's Dudley suffering the indignity of being suspended by his harness from said scales: 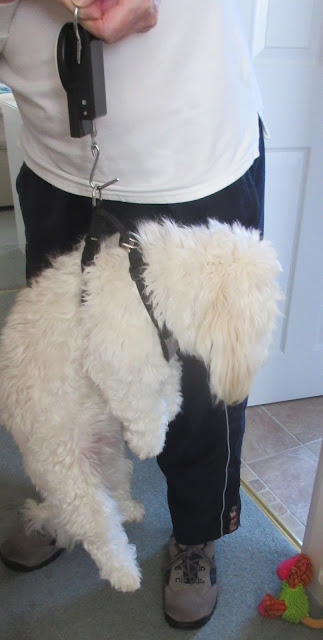 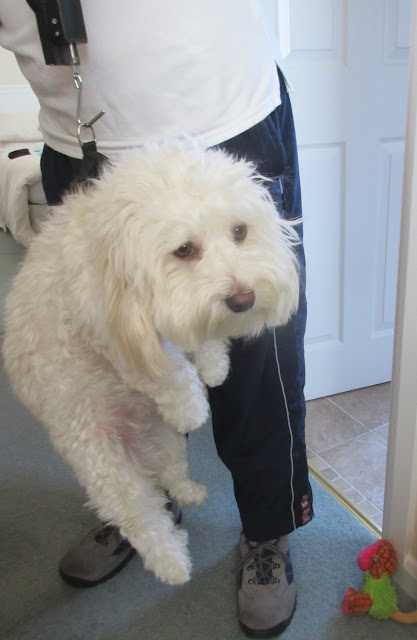 I have to say, he was totally uncomplaining and just hug there like a bag of shopping being weighed in a Far East market! And his weight is quite stable we were pleased to see. Despite his antics during grooming sessions, his patent dislike of 'the bone' - which was disposed of, and he was given a new one we had tucked away - Dudley is the sweetest and most patient little dog about so many things. He just dangled there quite happily!

The hedgies are out and about still, Dudley charged down the garden at one the other night, then screeched to a halt and just peered at it. And the hedgie stared right back at him.

Last but not least - remember it's April's Rudolph Days challenge over at ScrappyMo's HERE. You have until the end of the month to join in. There's gonna be a bit of frantic card making going on here!

Love from Parsnip and Dudley - plus a couple of 'fist bumps' from me,