I made this card last week, whilst my mind was whirling around over Dudley and his 'grooming experience'. It did help to have something relaxing to focus on - and using new toys is also such fun: 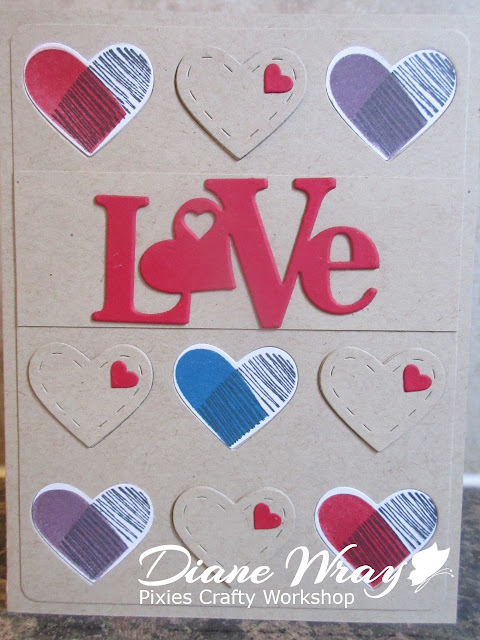 - first of all I stacked up 'Desert Storm' hearts, three high, to insert into some of the apertures - making sure the top layer was a stitched edge one

- then made up five dear little white hearts by using just two stamps from the NBUS matching Lil' Inkers set of stamps called 'Heartthrob' by first stamping the solid colours (blue, plum and red) and then the scribble stamp using Memento 'Tuxedo Black'

- die cut the word 'Love' using Impression Obsession's 'Love' die from a couple of snippets of SU's 'Real Red' card, glued on on top of the other and then glued the word to a strip of Desert Storm card before using it to cover the width of the front panel

The die and stamps are lovely together - loads of ways to use them and plenty of little sentiments in the set of stamps as well.

It's very clever how the overlapping 'make a heart' stamps themselves work, and there are a good few patterns in the set to choose from - but to be truthful it's also a bit tricky to get them totally placed where you want them onto the die cut little heart shapes. I used small clear plastic stamping blocks, having unsuccessfully tried to work out if I could use the Misti.

Sorry to see Lil'Inkers go, as I've said recently. I could only get hold of one set of stamps otherwise this would have made a nice Playground prize to go with a matching die like I used. Oooer, sorry I dangled that one - folk in the USA might have less of a problem finding the last Lil' Inkers stock than we do over here.