Crumbs, the short month almost caught me out, even though I pointed that fact out when mentioning one of my favourite challenges in Sunday's snippets post! It's February's Rudolph Days Challenge over at Scrappy Mo's and I'm racing in with this card before it closes today: 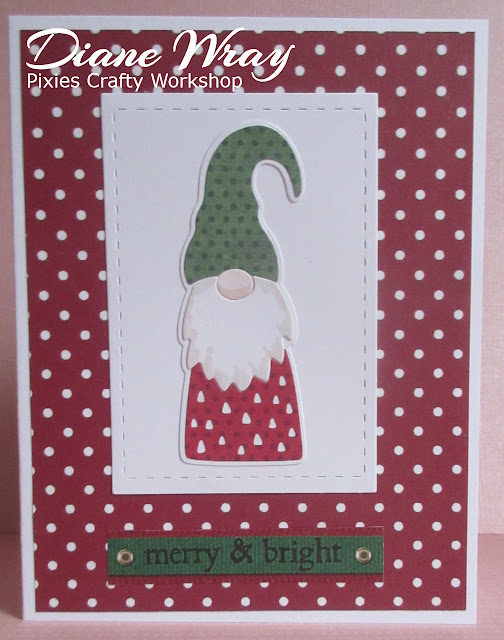 - die cut the gnome using green and red spotted papers from the same stack, plus some white snippets, and the two dies in the Simon Says Stamp 'Lil Gnome' set

- coloured the nose using pale pink Pro markers and then added some flicks of warm grey to the beard, also with a Pro marker

- using a glue pen added the die cut hat, nose, beard and body to the white die cut background (the body has little 'teardrop' shaped pieces cut out of it during the die cutting process - so sweet)

- added a hand cut sentiment below it from the same paper stack, the little 'gold studs' are just printed, very realistic as well

I actually made 12 of these cards, switching the green hat to red and the red body to green. And also, on four cards, used some similar freebie papers as backgrounds and toning sentiments - which I'd squirrelled away ages ago. Needless to say, the cards were made over three crafting sessions, but I do so love the dear little gnome and wanted to make several similar cards whilst everything was out on the desk. Sometimes I certainly do get my ambitions mixed up with my capabilities!

I'd seen the gnome die around Blogland and our lovely Darnell used it, and his big brother, here - used as Mr and Mrs, so clever - which clinched it for me. I only ordered the Lil Gnome, my favourite, for fear of HM Customs here in the UK. He, or she, sailed past them, no problem!

Edit: Gail (Ionabunny) pointed me in the direction of the Christmas Kickstart Challenge, so I'm linking my little gnome into the party where the theme is 'red'.

And, I used the Altenew Mini Blossom die cutting machine for all the die cutting - love that little machine, a great help when cutting lots of small die cuts!