Boy's Birthday card - out of this world

I made this card for Luke, a neighbour son who will be eight years old next week. Am posting it on here, mostly for my own records as it's just made from a kit: 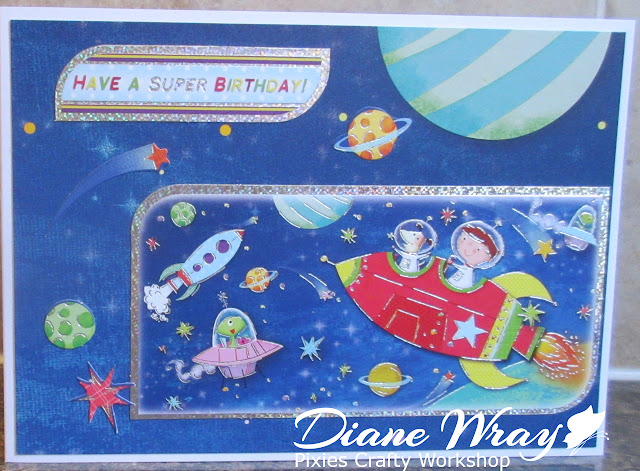 - backing card and toppers by Hunkydory, in a 'free' kit given out at a show up in Coventry a few years ago

- selected the piece of the backing card I wanted to use, trimmed it and glued it in place

- popped out the pre-cut 'toppers', snipped of the little white bits at the edges and then glued them in place

Has to be the fastest card ever!

It wasn't until Tuesday evening that we saw signs of Dudley's old spirit returning - five whole days after his experience at the so-called 'groomer's' - he played a game of 'zoomies' around the lounge and it was a delight to see his eyes sparkling once again. He's still very wary about having his collar put on, which he needs as well as his harness when he goes out so it can't be avoided. Time and patience with a load of love should help - we hope. Our next step is for me to take him out for a car ride in his doggie booster box for a little excursion - the last time he was in that, he returned home curled up into a very sad and shaking little ball. Perhaps I'll take his beloved 'Stinky Monkey' Mark 4 along for the ride to keep him company :)

Thank you all for your support - the Playground Pup sends woofs!