Time once again for ScrappyMo's Rudolph Days Challenge. I really thought I'd miss it this time round, with Dudley being unwell, but found some spare time over the weekend after all. And, I'm entering this into Craftyhazelnuts Christmas Challenge too - where it's anything goes .... so long as you don't 'bare yer bum in Fenwicks' shop winder! Explanation below this post : 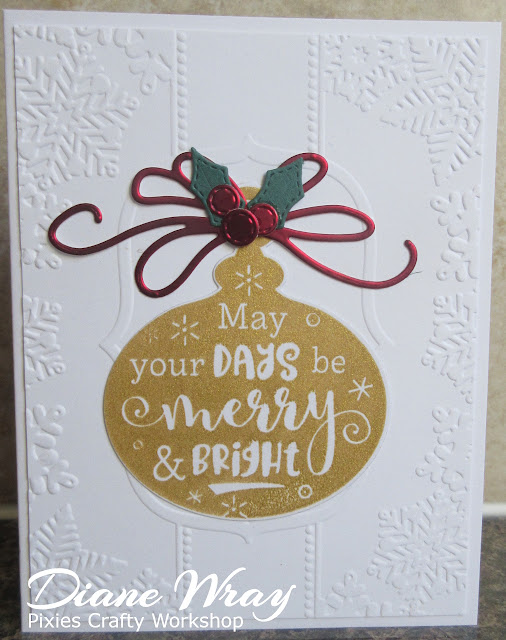 - piece of the same brand of white card, which I embossed using Craft-Too's embossing folder called 'Snowflake Banner', then trimmed to one eighth of an inch smaller all round than the card base and glued it to the card front

- stamped the bauble using Taylored Expressions' 'Iconic Wishes - Christmas' stamp and die set and Altenew 'Enchanted Gold' pigment ink pad (luscious, although I still think that Delicata has a slight edge!). Huge thanks to Mo for gifting me this stamp and die set last Summer - it's lovely!

- then die cut the bauble using the die which came with the set (in the UK, we call them baubles rather than ornaments in case you wonder if there's a difference!)

- and called it done

Believe it or not I made six the same whilst Dudley was resting under my desk. Mostly as I needed to just do something a bit mindless for a couple of hours to relax, if that makes sense. He was quite poorly and it wasn't a happy time for us. Seeing your beloved pooch lying with a hot and dry nose just listless and almost where he's well out of the way is heartbreaking. The little monkey is making up for it now - racing round the house doing 'zoomies' and generally in 'Dudley Plus' mode!

BTW. I got the idea for using the Penny Black bow die cut with the bauble from Laurie's blog - thanks honey!

And now for a proper Dudley update. I certainly think we have our little bundle of mischief back on form! He's eating really well and is even tackling 'Naturo dinners for dogs' with chicken, rice and vegetables. And, his 'output' is nice and solid once again - betcha didn't need to know that really but the nurses at the vet's told us that it would be the last thing to return to normal. So, with fingers and toes crossed, we're living in huge hopes here.

Explanation of the 'bare bum in Fenwick's window'. My roots are North East of England, despite being a nomad all over the World for many years whilst Dad was in the UK Forces. I was born in Newcastle General Hospital eons ago (they're still in recovery, like me). We returned to the North East when my Dad had his final posting, just before I left school in Germany aged 18 - ha, they thought I wouldn't find them 'cos they moved during term time ...... but I did. And I lived, worked and married there until things in life changed so much that I sort of ran away to London and the South of England for a new job - and to escape a lot of hurt and sadness.

A Geordie's humour is raw and can be right to the basics, it took me some time to get used to it I admit - but they're mostly the most wonderful people I know. So, if there was an issue, people who spoke 'broad Geordie' which my Dad would most certainly have not tolerated, but I heard elsewhere and stored in my memory bank, would exclaim, to express disbelief, shock or horror some of the following 'Wey pet, ahl gan to the foot of ower stairs' (goodness knows what that meant! Why would one go to the lowest tread of the stairs and gawp upwards except to ask for help from above I guess?). And another one was 'Ahl bare me bum in Fenwick's shop winder' aka window - so it's pronounced like 'wind - err'. Basically - 'Good grief, I am so surprised I will drop my pants and show my naked rear end to everyone who has the misfortune to be passing the largest department store in Newcastle, based on Northumberland Street which is the poshest shopping area of its time'.

Fenwicks, which has branches throughout the UK, is in fact a Newcastle company family, despite the London and York connection, as well as elsewhere. 'Yer canna keep a Geordie doon pet, when ahl's sayed an' dun'. I'm evil really and, although not really brought up in the North East, I do love to tease my Len now and then with the local vernacular I picked up and saved in the memory banks when living and working up there - such as 'Hey ye ower there, hoy yer 'ammer ower 'ere - and divvent gi' me any sh*te either'. Which loosely translated means 'I say, my good fellow over there. May I borrow your hammer - if so, do please pass it across to me - and don't waste time arguing about it'.

Can you tell I'm a happy and very relieved bunnykins here?! Snigger.