First of all, thank you so much to everyone who commented about my quandry whether or not to order from Simon Says Stamp! I did end up placing a small order, needless to say the postage is sky high, so it remains to be seen what transpires once it reaches the UK! Fingers crossed.

It's still hot down here in Hampshire, but thankfully we're not having the rain problems and flooding that some others parts of the UK are contending with.

I needed a Birthday card for a good friend last weekend and so I also made it my snippets card ahead of the usual panic here - me not totally stupid.

And therefore, here's my snippets card for this coming fortnight: 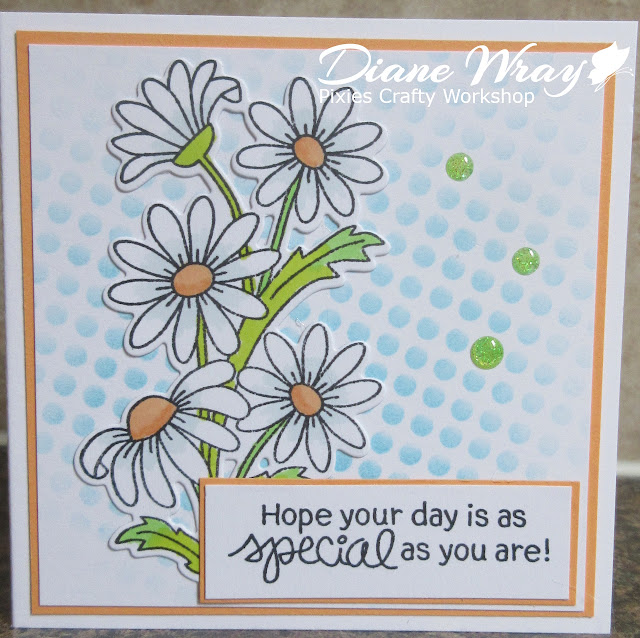 - piece of white card, also a snippet, onto which I stamped the adorable Newton's Nook 'Dainty Daisies' plus a sentiment from the same set (I chose one suitable for a Birthday but I do love the other sentiment which is 'Thanks a bunch!'). And of course I used Memento 'Tuxedo Black' ink and the Misti

- then coloured the 'daisies' image using Pro markers before die cutting the bunch using a die from the Newton's Nook co-ordinating set, I did find it best to use another snippet of card to cut a template to ensure the placing of quite a detailed die

- so I cut everything back to go onto the now reduced in size card blank and glued the peach frame and image background panel in place, before trimming and adding the sentiment to another peach frame

- as always, I added an insert although I usually leave those blank but this time I added 'Happy Birthday Wishes' using a stamp from a pre-loved SU set called Avant-Garden (this is really for my own record as it took me ages to find a small enough sentiment that went with the font of the sentiment on the front of the card)

So, it ended up as a much smaller card than I originally envisaged - but, victim of my own OCD really, I like (as far as possible) to only use goodies on my fortnightly snippets card which form part of the prize. Otherwise, I really do think those daises would be in a pretty die cut frame (of which I have a good selection) or aperture - and the sentiment would have also been die cut using an elongated pennant/flag or some such die, IF I could find one absolutely the right size, which is rare when I'm sticking to using a specific sentiment.

There are loads of ideas out there for how to use this lovely 'Dainty Daisies set' - quite a lot don't even need the die cutting and some are such vibrant and quite funky colours. I think the set is a fairly recent release (2019) and I just bet I spotted it on one of your blogs (or Seven Hills blogspot which is fabulous but so tempting) and ran off to buy them.

The prize this fortnight is: 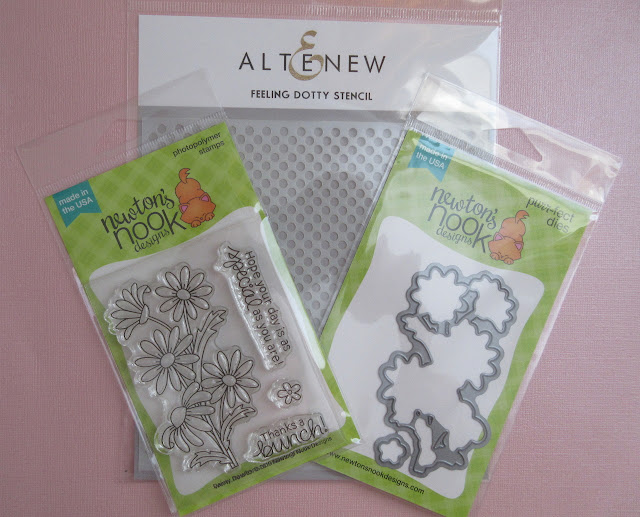 Of course it's a Newton's Nook 'Dainty Daisies' set of stamps with matching dies, plus an Altenew 'Feeling Dotty' stencil.

As always, the Snippets Challenge will run for two weeks and the Playground gates will close at 11am UK time on Saturday 17th August. The gates will open again at midnight UK time on the same day.

And we do have a few photos of Dudley this week - in the garden one evening, having one of his favourite times of the day, which always includes a little 'treat' or two of course. He still hasn't opened up his Birthday cake shaped treat though, it's being saved for after this coming Tuesday when he gets home from having a 'shampoo, set and manicure' at our local grooming salon. He'll need so little trimming that, for now, he's going to the local branch. That makes life much easier for us not having to trek to Winchester as I can take him on his own and then either come back home for an hour or nip round Sainsbury's just over the road from the grooming place.

Anyhow - here's the little chap, especially for you:
Lots of love from us all - Parsnip, Dudley and of course me,