A little (not so little now) neighbour, called Taylor, is ten tomorrow. It's safe to post this card I made for him, as he doesn't know about the blog: 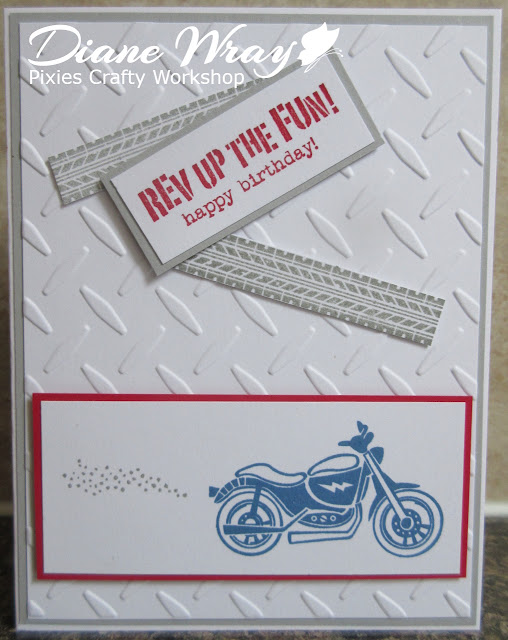 - a snippet of SU's 'Smoky Slate' card stock, trimmed to slightly smaller than the card front and glued in place

- next, out came the Misti and a Stampin' Up set of stamps called 'Rev Up the Fun', and this card is made totally using stamps from that set. Taylor's Dad has a motorbike and he loves to go for a little spin on it all togged up, sitting behind his Dad

- I stamped the bike onto a snippet of white card using Memento 'Danube Blue' - I'm a bit careful/mean and only buy colours like this in the 'Dewdrop' size if I rarely use them. The Misti is so useful to get a totally crisp image

- then, using the Misti again, I stamped the 'exhaust fumes'- checking for position with a snippet of scrap card, and SU's 'Smoky Slate' ink pad before doing the real thing

- whilst at it, still using the Misti, I also stamped a couple of the tyre tracks stamps - again with SU's 'Smoky Slate'

- mounted the trimmed image onto a snippet of SU's 'Real Red' card stock, and did the same with the sentiment - only I switched and used SU's 'Smoky Slate' for that element

Sorry if I haven't visited the Playground entries as promptly as I should - bit busy here but will be there ASAP!