Hi again! Hope all of you in the UK are enjoying a very pleasant Bank Holiday weekend - with some sunshine thrown in wherever you are!

This is my snippets card - with a couple of snippets and a little bit of colouring (I told Parsnip not to go sunbathing - snigger!): 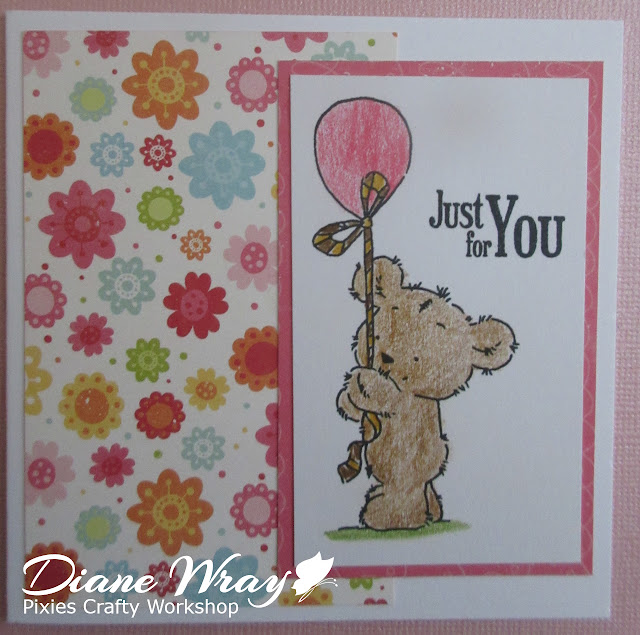 - the image and sentiment is from the discontinued LOTV 'Happy Bears' set of stamps, stamped onto a snippet of white card using Memento 'Tuxedo Black' ink and the Misti

The card was super-fast to make and I used Polychromos pencils for speed. I sort of prefer Pro markers as they don't show the pencil strokes, although I also quite like the hand coloured look from using pencils as well! If it's good enough for Banksie the artist, then it's good enough for me :)

The stamp set I used, as I said, is discontinued - I bought it (and one for the toy box) absolutely ages ago as it reminded me so much of little Parsnip. In fact, LOTV are going fully digital very soon (15th June) and are selling off their rubber/poly stamp sets at a discount. Thanks Sarn for that 'heads up'!

The prize this fortnight is this: 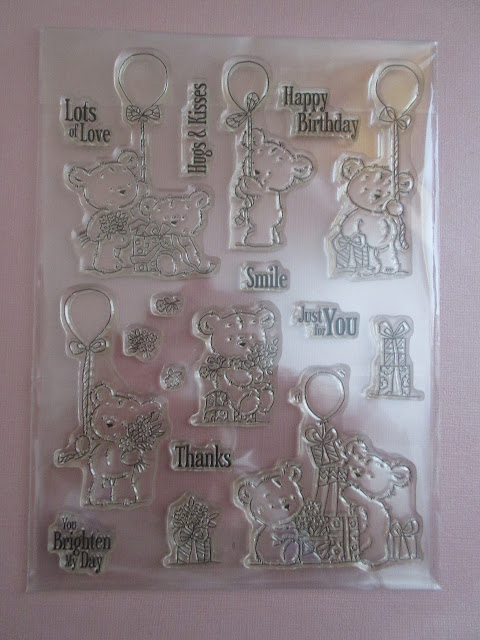 I really love this set of stamps by LOTV called 'Happy Bears' and have slapped my wrists for not using it sooner. The sentiments can be used in different ways with the lovely images - sort of tucked in beside the balloons etc.

As always, the Snippets Challenge will run for two weeks and the Playground gates will close at 11am UK time on Saturday 8th June. The gates will open again at midnight UK time on the same day.

Remember, if you link into the Playground and don't say clearly that you want to be in the draw in a comment on here, then you will be bypassed if your name comes out of Mr Linky. I'm sure you all know I ask for a positive 'yes' on the blog post itself - just in case you're playing only for fun - otherwise I don't add you to my little list.

Lots more words next - much of which is a progress update but also for my own records. Skip it if you wish!

Funny old week really - long story cut short but my BP has really plummeted to the point of being too low and also I discovered that the 'culprit' is a diuretic BP medication I'd been on for about five months when this all kicked off. Ha, it went into overdrive I think - but try getting a doctor to admit to that. However, he's pulled me right off the pills (that alone tells a story) and finally I hope to begin 'goat prevention meds' in a couple of weeks - I have the prescription and just hope the time will be right soon. The gout measurement they use (uric acid) is totally sky high from the blood tests and much higher than any previous readings (like I didn't already know that?). And I should not have needed to go 'spend a penny' five times during the Eurovision Song Contest when we (sad I know!) watched it on TV last weekend.

I think, these days, it's a case of know your own body  and protect yourself as much as possible from the awful meds that are out there. Always double check the leaflets that are in your meds - I firmly believe that because I was too trusting, that trust may have really let me down. My initial attack three years ago was also caused by medication - but you hope that it being in your notes, as well as you reiterating 'no diuretics' to your GP, would count for something, sigh.

Anyhow - the effect is cumulative apparently so now that evil drug needs to dissipate from my system 'toot sweet'!! My fervent hope is that I've found the root cause and things will improve from now on.

We took Dudley to the groomers this week just gone (the day after I'd seen our GP) and the following day (Friday) I was laid up again, but most likely from the lingering inflammation not taking kindly to me wearing (very sensible) shoes and doing just a little bit of walking - rather than a full on gout flare. Literally I did a couple of hundred yards but sure paid for it. However, today (Saturday as I type this) things have eased a fair bit - although have had to cancel the reunion altogether ..... as I suspected might be the case. In many ways it's a relief that the decision has been made for me - I used to be indecisive, but now I'm not so sure' tends to be my motto!

We do have a new photo of Dudley this time round - some of you have seen this on Facebook: 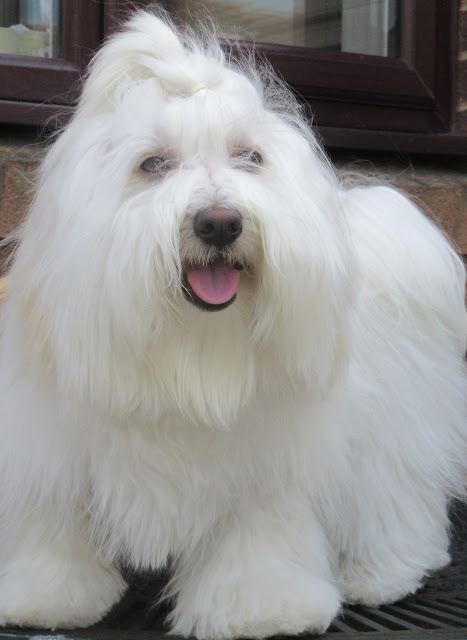 Taken after we got back from the groomers on Thursday so he's looking like a white ball of fluff, so very silky and soft and smelling gorgeous as well. His weight is the same as last time, so it looks as if he's fully grown now (in body, even if not in mind - Dudley will always be a bit of a crazy puppy we think).

The trip to Winchester was better than usual - we gave Dudley some homoeopathic doggie calming drops beforehand and also used his new booster seat for the first time. It's really like a fleece lined box affair which is secured using straps and a mix of the car seat head rest and also the safety belt. So there was Dudley, in his booster seat, secured by his harness for good measure and off we set. I sat in the back beside him and Len was up front playing at being 'chauffeur'. We took Dudley's favourite toy - he came to us with it last September. It's a really cute monkey (and monkey goes absolutely everywhere with him - to the point that he's very grubby and also whiffs a bit from constant chewing and licking, and Len won't even touch 'stinky monkey' now!!). So there we were, merrily tootling along and Dudley started his fretting - not as bad as usual thankfully but enough to make me hold stinky monkey out to him for comfort. So funny, he did his 'grumpy growl' (more than once) as if to say 'Take that thing away from me - can't you see I'm a little bit busy right now, having a panic attack. I can only cope with one thing at a time, you silly woman'!! We did giggle over that one later on - and in fact Dudley was calmer coming back home as well. He even laid down and slightly dozed off a bit ...... knew I shouldn't have given him so many drops :)

We then sat in the garden later on in the afternoon, talking the day over whilst Dudley played out on the lawn (trying to undo all Auntie Steph's hard work!) and we witnessed the sweetest thing ever! We've known that the blue tit nest box above the kitchen window was occupied (as it is most years in Spring/early Summer) and have heard little cheeps recently, as well as the parents flying to and fro to feed their young.We then actually saw a little face pop up at the box hole, whilst the parents called from the far end of the garden. And all of a sudden - out came the tiniest, perfectly formed, blue tit fledgling and off it flew into the honeysuckle covering the arbour.  Literally seconds later, it was followed by another one - and after that the nest went quiet. We think those two might have been the last ones to fly as it was getting a bit late in the day for baby birds to take their first flight. It was pure fluke we saw what we did. And, although my camera was on the garden table there was absolutely no chance to take a photo as it all happened quite quickly whilst we watched in wonder. Needless to say - it's a lovely memory to have in any case and just as precious! Nature is just marvellous isn't it?

Their timing was just so perfect, as we're having work done outside (new soffits etc.) from this coming Wednesday onwards! A bit as if we'd posted them a little letter warning of 'new works ahead' really. Now, thankfully, they won't be disturbed - although we had a pair successfully carry on nesting a few years back when there was scaffolding for the upper house extension and other stuff going on. No doubt Dudley will do a bit of 'woofing' whilst this lot of work is being done though! It was planned so that I would be away for some of the time, making parking for additional vehicles a bit easier, but that didn't happen of course. We'll cope though though - we always do.

Lots of love from us all - Parsnip (who is still very much loved and spends a lot of his time making sure that Dudley can't reach him!), Dudley and of course me,