I was determined to join in this months Rudolph Days challenge over at ScrappyMo's. My card is very simple, and I have a sneaking feeling I've made a fairly similar card in the past, but it's the best I could do this time around: 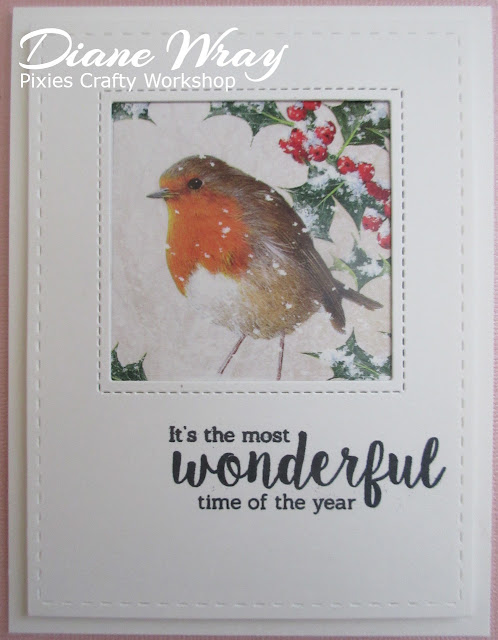 - 5.25" x 4" 'off-white' card blank, tent style (I chose 'off-white' as the image I was using looks better than it would against bright white) - and the size of the card is quarter of an inch smaller top and side than a USA A2 card, which is usually my preferred size but the top panel just looked a bit lost on the bigger size so I chopped the card blank down

- another piece of the same off-white card, die cut using the second from largest die in the Lil'Inkers 'Stitched Rectangles' set of dies

- then die cut an aperture in the stitched panel using a die from the MFT 'Inside Out Stitched Square STAX' set of dies (bought just before I was attacked by the dreaded gout). It's a great set in that each die will cut an aperture with a faux stitched edge to it as well as the centre 'waste' square also being edged with faux stitching - so you can make toppers or apertures, very versatile!

- then added the sentiment using the Misti, Memento 'Tuxedo Black' ink and a stamp from Uniko's 'Most Wonderful' set of Christmas sentiment stamps

- used the aperture to very lightly pencil around the portion of the card I wanted to up cycle and then trimmed round leaving an overhang of about 0.25"

AND, thanks to Susan B for the heads up - I'm also adding this card into the current 52CCT Challenge, which is basically to re-use something you've been hoarding! I cannot believe I've missed this challenge for all these years. Slap my wrists, especially as our Alison is heavily involved. I aim to put that right just as soon as I'm running on all cylinders once again.

I do hope to be able to make a snippets card for Sunday's new challenge (#347). This foot is taking its time to allow me to be as mobile as I want and any time spent crafting or sitting without it raised causes it to shout and tell me off. But, each day brings an improvement - and regardless, snippets card from me or not, we'll have a fresh challenge on Sunday!