Well! What a week that's been for sure. I was totally blown away by the wonderful blog hop that Darnell arranged in such secrecy to celebrate 7 years since I took over the Snippets Playground - and of course it's 8 years since Jules started it all off. Who knew it would still be going from strength to strength all this time later? And I certainly didn't realise the wealth of love and gratitude there is for having the Playground to share your snippets in. I've smiled like a Cheshire cat, laughed out loud at some of the outrageous shenanigans going on ..... and also shed a few tears of pure joy to know that you like it here! A huge thank you - and also, don't forget that we do have some lovely Playmates who at times send prizes for the Playground as well. Am not asking for more, can only just close the toy box lid right now - but it's important that we also remember their kindness.

I see the hop carries on for another week as well - I'm doing my best to comment and will get round to every single one of you I promise! A HUGE thank you also to Darnell of course who arranged this, mwah, you really are the best! Reaches for fresh box of Kleenex.

Friday was a blizzard here in North Hampshire for most of the day and in the end the whole area (our closest motorway stretch and other local roads) was totally gridlocked - and a lot of it still is apparently. We'd already decided not to budge and had done all our trips out before yesterday thankfully. We saw people trudging home on foot having abandoned their cars in the lane at the top of our road, or even further afield. Len fought a constant battle to keep the penned in part of the patio near the house clear so that Dudley could go to the loo without being up to his chin in snow. We only had about 9" in total and both of us have seen much worse when we lived in other places - but this is the very worst we've had in the whole time we've lived here and frankly much of the UK is just not geared up for such conditions. Both of us have previously been caught in sudden snow storms in our cars here when we were commuting and it can be pretty scary stuff! Today (Saturday) the sun is shining and folk are out clearing their driveways etc.

Here's my snippets card - and in fact this week you get two for the price of one - special offer (BOGOF, Buy One Get One Free): 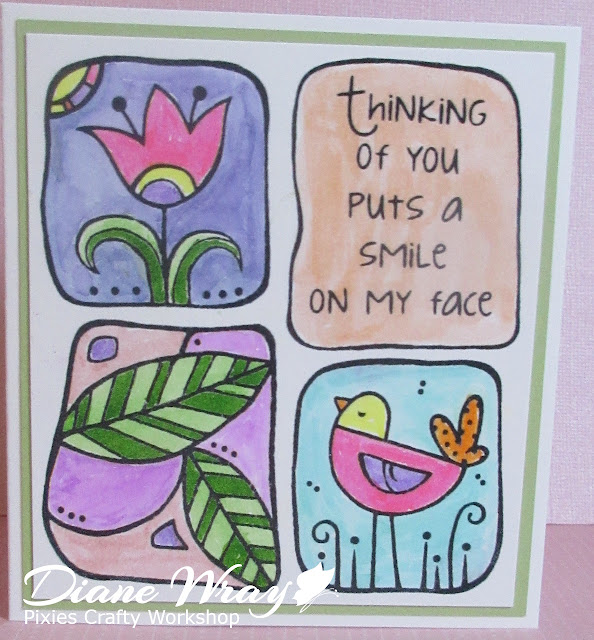 This card is for all of you girls, with love from me! 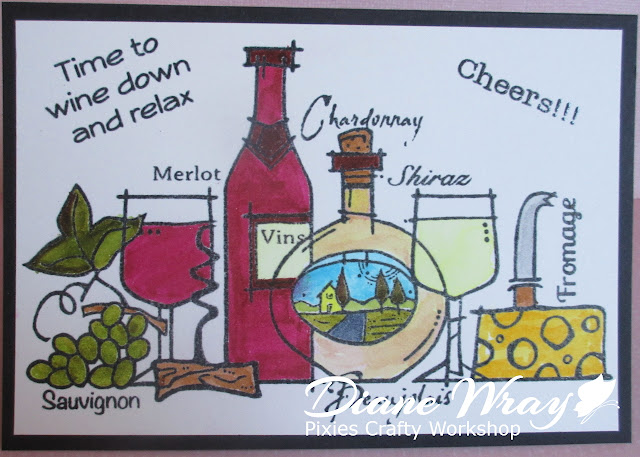 And this card is also for you girls. From some of the comments I've been reading as I hopped around' I can see that the surprise visit from one certain little Miss Mischief precipitated a load of sneaky sips and even some moonshine!

Both cards were made in a fairly similar fashion so am covering them both  in my usual 'I used' blurb.

- a black snippet of thick card, scored and folded into an A6 sized card blank - tent style and a snippet of Strathmore Mixed Media paper (which is actually 300gsm!), which (once the image panels was ready) I scored, folded and trimmed to 4" x 4.25" - side opening

- then I used a couple of snippets of the Strathmore Mixed Media paper (I never throw any offcuts of that out, it's too expensive!) and stamped the image panels

- spent a happy time colouring both image panels with my Ziggies - word of warning, the red is really easy to pick up on a finger or the side of your hand and then leave a little smudge - ask me how I know this, thank goodness for a sand eraser!

I had been going to change the card sizes and add a stripe of patterned paper to both cards but in the end decided they were already busy enough.

I've had both these stamps for a good while now but to be honest, colouring the 'wine down' one always seemed really daunting but in fact it was great fun! When I use the 'smile on my face' stamp again with Ziggies I'll do the backgrounds first so they can be mottled with a mix of colours.

And of course, this fortnight's prize is the same as the stamps I used: 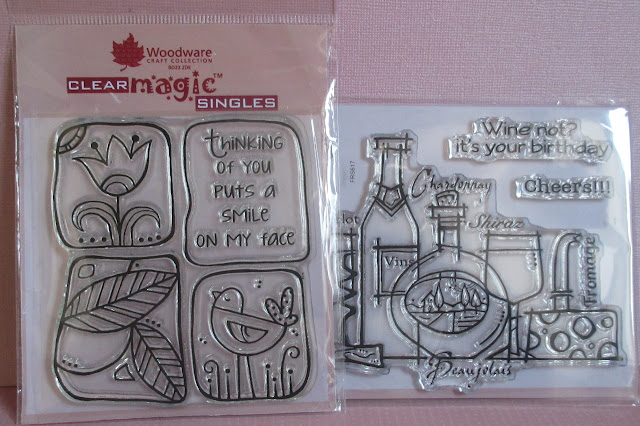 The Woodware 'Smile On My Face' stamp and also the Woodware 'Time to Wine Down' set of stamps. I will be offering these as a bundle and won't separate them, but do feel free to give one or other away if you don't want them both.

Remember, if you link into the Playground and don't say clearly that you're wanting to be in the draw in a comment on here, then you will be bypassed if your name comes out of Mr Linky. I'm sure you all know I ask for a positive 'yes' on the blog post itself- just in case you're playing only for fun - otherwise I ignore you on my little list.

Last minute edit! After the snow clearing, Len took Dudley out for a walk. I managed to take a quick photo when they got back, but he just won't look at the camera so this is the best I could do. In fact, he's really keen on eating as much snow as he can! At least he's showing off his new jacket though: 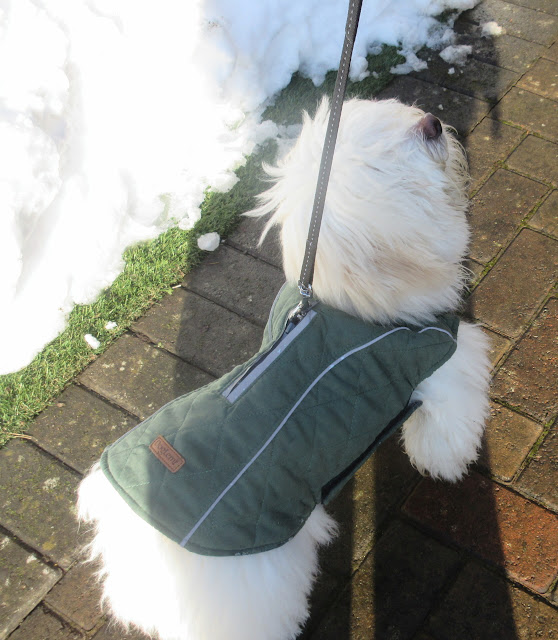 With love from Parsnip, Dudley - and of course me, stay warm and safe!