Not much time to join in with challenges these days, but the latest LIM challenge where the theme is 'Metallics' really called to me - particularly as I had a two part set of dies I wanted to use to boost my Christmas card target - which is now up to 106.

I made four cards, switching the gold and copper around so there are two of each exactly the same in the set of four: 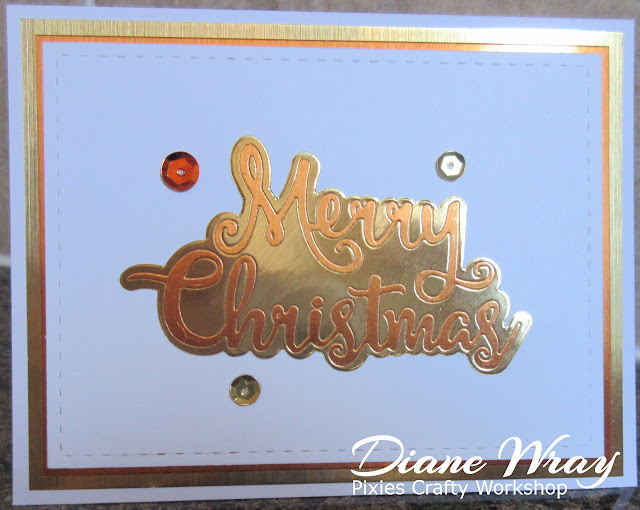 - layers of gold and copper Xcut adhesive metal effect sheets for the borders. To add these it's easier to just peel off a little bit of the backing down one short side and line it up on the card blank before going the whole hog and peeling off the rest. tI helps with alignment of course and if you gently smooth as you peel off the rest it lies nice and flat

- for the sentiment I used the 'shadow' set of two dies which I've been itching to use, made by Pink and Main called 'Merry Christmas' - and cut one from a snippet of gold and the other from a snippet of copper

- **and before going any further, to make sure the sentiment was well 'bonded' I ran the whole white panel through the Cuttlebug using embossing plates and an unopened embossing folder

** I really do recommend this step with your die cutting/embossing machine if you feel there's any chance of the self adhesive sheet coming adrift at all - plus, it really does make the wording look as if it's been foiled almost into the matching shadow background!

Happy dance here at having made four more Christmas cards. And, I also have this same set of Pink and Main dies in the Playground Toybox - lined up ready for the Christmas/New Year bumper draw. More about that nearer the time, grin.

This past few days have been doing inserts for the fairly large number of Christmas cards which hadn't been totally finished off as I went - naughty me! Having said that, so long as they aren't left right until the last minute it's much easier to set up a little production line and do them in batches of all the same size. Print, trim, fold, stick insert in place, add envelope, pop in cello bag (a bit wasteful I know but much easier when sorting out which card to send to who - plus I check the thickness using a letter gauge and write on the cello bag if it's a S (small) or L(large) letter stamp that's needed. OCD strikes again!!