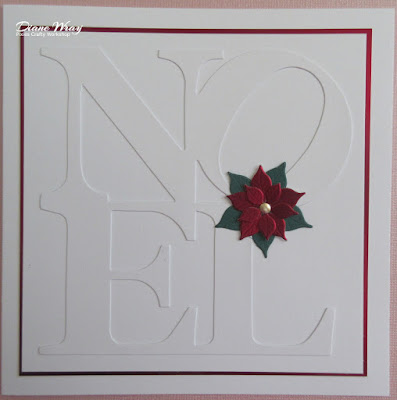 Oh Di what a stunning card - love it, and well done you on buying the die cuts!
Blessings
Maxine

This may be CAS but it has such IMPACT with the large letters set off so nicely by the poinsettia. Thanks for the useful link too.

A fabulous card and I love the die cut NOEL. Thanks also for the ebay link - I've previously bought some die cuts when I wanted to make a wedding card but couldn't justify the cost of buying the die to cut my own!
Kath x

WOW - that's a stunning CAS Xmas card Di. Just perfick Missus! And ANOTHER 6 for the box!

I love the WOW of the letters against the background Di, and the pop of red with the poinsettia and the red layer is just perfect, and six more for the box. x

This is just a SUPER CAS! Love the touch of the tiny poinsettia!

This is a beautiful card. I love the white with a pop of red. The teeny poinsettia looks so sweet. There are so many things you can do with die cuts and how cool that you can just buy them from someone.

Hi Di, a fantastic card for your stash, love the cas design and the white on white. Have a wonderful weekend... Megan

Oh I say these are rather posh and very elegant. I'm a sucker for butterflies as you know. Off to do a bit of shopping. Hugs Mrs A.

Just a quickie .. stopped by chocolate buttons and saw your comment ...

I'm not usually a fan of 'C' cards but I love the design on this one... what a great idea! Mounting it on red is perfect.

Beautifully CAS - I'm not sure I would have known how to use this die, but you did a perfect job.