First of all, Happy Easter! For those of you who follow Christian beliefs, may today be one for rejoicing - and if you are of a different faith, are unsure, or only believe in the Easter Bunny, then I wish you too a happy day.

I try to make my Sunday snippets cards at least a week or two in advance - and today's is no exception, it was made a couple of weeks ago when we had the second visit from the 'Beast from the East' - bringing more snow. So, imagine my surprise when I spotted that it fits this week's  challenge over at MFT's Wednesday Sketch Challenge #378. I couldn't have hit more lucky really. 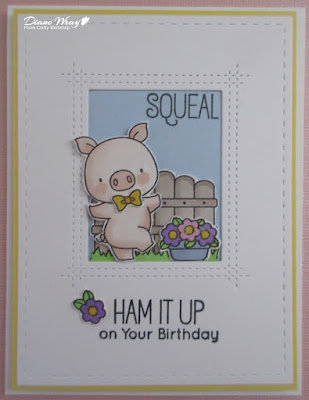 And here's the sketch: 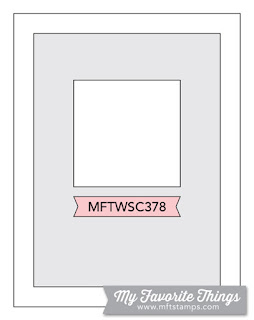 I dithered over the amazing coincidence - but am entering anyhow as it's pure serendipity that the coming fortnight's Snippets Playground prize was already planned out to be MFT and the card was already made ready to publish in this post. And, as many of you know, MFT always ticks the boxes for me!

- piece of white card, which was a snippet with the edges already cut using a stitched edge die - most likely using a Lil 'Inkers 'Stitched Rectangle' die

- rootled around in the snippets folder and found a piece of yellow card which needed just a little bit of trimming to form a frame around the back of the stitched aperture panel, which I put to one side for now

- so I knew just what the working area would be for the little scene I lightly drew a penciled rectangle onto the piece of blue card and trimmed it using scissors, leaving a quarter inch border right around the penciled rectangle

- oh my golly-gosh. There really were so many options I could have chosen - the possibilities are endless

- in the end I chose the 'dancing piggy', the fence with grass, a bow tie for the piggy, a bowl of flowers, one single flower and a couple of sentiments

- then spent a really happy half hour or so, colouring in using Pro markers

- I'll confess that I dithered so long about getting the matching dies that in the end I had to put the brakes on my spending a bit, plus they're totally out of stock here in the UK. But, this truly is one stamp set that lends itself to some careful hand cutting with no overly tricky bits (that I found!). Just use small sharp scissors and don't 'snip' using the pointed ends of the scissors unless you really need to - try and sort of steer the stamp outline around the meeting point of the scissor blades. I use a dedicated pair of almost the smallest Fiskars scissors for a lot of paper cutting of stamps and for paper piecing - they measure 4" from the tip of the point to the top of the handles and the cutting blade is a little over an inch long

- fussy cut all the elements and popped them into a small plastic lid as I went to keep them safe - trust me, this is the voice of experience here

- next, used the Misti and Memento 'Tuxedo Black' ink to stamp the word 'squeal' onto the blue panel - (hint) I had all the cut out elements to hand, to check the word would fit and of course had the rectangle already penciled in

- then stamped the sentiment onto the white panel for the card front, from the same set of course - 'Ham it up.......' - such fun! Used the Misti and Memento 'Tuxedo Black' ink again

- before going any further, I added the fence and the grass border (all the same stamped image) to the back of the aperture using red line tape - plus a further two little strips (with the protective backing left in place) further up the back of the fence - before then rubbing out the penciled lines showing the 'scene' area

- so now came assembly time - first I used red line tape around the back of the aperture and then very carefully - top first - gently worked down, peeling and sticking the aperture piece to the blue card

- ready to roll with the rest of the scene

- popped the bowl of flowers in place using red line tape - this didn't all happen without a lot of previous double checking BTW!

- next, stuck the single flower beside the sentiment - I tried 'with and without' - 'with' won in the end as I thought it balanced out the 'squeal'

- then glued the whole panel to the front of the card - just a touch of clear Wink of Stella on all the flowers and the bow tie - all done!

I've used and loved my own MFT Peek-a-boo die for ages as am sure you know, and MFT's darling stamps are just made for using with them.

But, the Hog Heaven stamp set is truly absolutely fabulous - well beyond what I expected. There's a lot of cute of course but also humour, versatility and some very clever ideas to be found on line.

So, here's this week's Snippets Playground prize - as if you really couldn't guess: 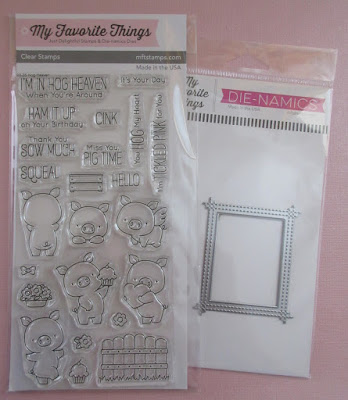 It's the MFT 'Peek-a-boo' Window rectangle die, as well as the MFT 'Hog Heaven' stamp set - yay, happy dance! For a much better look at the stamp set - HERE'S a link to it on the MFT website.

It's a double prize as it's just over eight years since I first set up this blog - time sure flies when you're having fun!

One of the best laughs I got was exactly five years ago today when I posted HERE that there was going to be a shortage of  'Poliflora' - a plant derivative which is used in all forms of glue and sticky stuff. A friend emailed me to say that she'd told her craft group about it - and one member of the group disappeared into the adjoining craft shop - coming back triumphantly ten minutes later having bought a huge assortment of glues and sticky tapes! Bwahm ha, ha - I'm soooo bad sometimes :)

As always, the Snippets Challenge will run for two weeks and the Playground gates will close at 11am UK time on Saturday 14th April. The gates will open again at midnight UK time on the same day.

This time round I will split the prize if you only want to play for part of it, but it is actually one prize if you so wish. I've offered the Peek-a-boo die at least twice previously as prizes, so some of you may have either won or perhaps gone and bought your own die. Also, the Hog Heaven set of stamps is so versatile that it easily stands as a prize on its own.

However, BOTH items are available as a single prize of course and they really are a match made in heaven! Just let me know in a comment if you're playing for both parts of the prize - or for one or the other.

Remember, if you link into the Playground and don't say clearly that you're wanting to be in the draw in a comment on here, then you will be bypassed if your name comes out of Mr Linky. I'm sure you all know I ask for a positive 'yes' - just in case you're playing only for fun.

Be sure to call back next week to see the winners of last fortnight's 'Mama Elephant 'Favour Bag Accessory - Bear' die set. Plus (hopefully) a Guest Designer and fortnightly picks of course.

Love from Parsnip - who interestingly seems to have gone right off choklit since he binged whilst making some homemade Easter eggs. Ah, no doubt he'll recover once he hears the rustling when we open an Easter egg a dear little friend called by with the other day! And love of course from me,