I wanted to make a Birthday card for a friend and also wanted to try out a 'Decorative Corner Card'. Sarn was the person who first introduced me to this particular style of card - HERE. I absolutely love this design! Sorry for the odd angle but it's to give you an idea of how the card opens out to stand on its own: 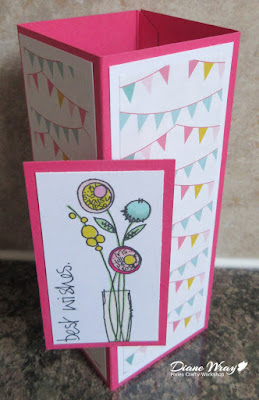 - for the card basis, which is a 'square tube' shape, I used some SU card which I think may be 'Melon Mambo'. If so, it's pure coincidence that I used the same colour as Sarn's gorgeous Birthday card to me in September - HERE, as I was working around some patterned 'bunting' paper I'd found and wanted to use up

- I followed Sarn's instructions to the letter, apart from cutting the card structure to be 5.5" tall and adjusting the top to bottom measurements of the panels as I knew the image I wanted to use was tall and narrow. Of everyone I know, Sarn writes instructions just brilliantly (she used to run classes), and has encouraged me immensely to try out new ideas/techniques

- the 'bunting' patterned paper was from one of those freebie booklets that sometimes comes with craft magazines - it's old, I know that much! Plus one white panel for a message - which I backed with deep turquoise card, in keeping with the colour scheme

- did all the cutting and sticking as explained by Sarn on her blog and assembled the 'square tube' all ready for the front piece. I used red line double sided tape to join the sides - a long tab, which is a simple little addition to the original idea Sarn had found meant that the 'join' part was an integral part of the card 'tube' rather than being a 'double hinge' add-on. Little hint, I didn't fall foul of it this time but if you have any doubts, then do check if your patterned paper will be OK using liquid glue (just use small scraps to test) if that's your preference. The paper can be thinner/lower and more absorbent quality. I didn't even do a 'bleed through' test as the paper quality already seemed prone to problems so I used a Stix2 tape runner instead

- stamped the image onto a snippet of white card stock using Memento 'Tuxedo Black' ink and a sweet little (ATC size) Paper Artsy JOFY stamp called 'Best Wishes - JM22' which a lovely bloggy friend recently offered to me when she was 'culling' some of her craft goodies. The amazing thing is that I'd spotted someone else using the very same stamp(s) just days before and had been sighing over it! I bet it was one of you lovely bloggers who was doing the using - and I do consider myself super-lucky that the offer came my way, mwah!

- coloured the image to pick out the colours in the 'bunting paper' and the bright pink card I'd used for the box. I used Pro markers and my very old Pro marker fine nibs which clip onto the fine tip end for even finer work. Not sure if you can still get those now but so useful

- then I hunted high and low through every single die here and just couldn't find one the right size/proportions. So, just trimmed the image to suit and mounted it onto a slightly bigger snippet of the left over bright pink card

- peered at the instruction sheet and next step was to make the mechanism tabs for folding the panel onto and also away from the card 'front', And, could I find a circular die or stamp that measured 1" - or even a size that divided by two - essential for the next step? Not likely - sat a bit dumbfounded at first I admit!

- but here's what saved me - I used a SU 1" square punch instead. Followed the instructions to punch out, and score down the centre at 1/2 an inch, two bright pink tabs. Flushed with success, used red line double sided tape to fasten the mechanism to the card and then attach the image panel- stood back, checked the card opened up fine and gave self a little pat on the back - job done! Ahem - how wrong can you be 😓

OOPSIE!! I now had bunting pennant flying upwards - had only gone and stuck the panel in place upside down! The rescue job entailed prising the image and tabs from the box shape - which also meant wrecked tabs, tears behind the pink backing to the image panel and also one bunting panel torn. Red line tape is really fabulous stuff, but not if you make a mistake for sure.

Too much work had gone into it so I tracked back and corrected the torn bunting panel with a fresh one, added a slightly smaller pink rectangle to the back of the image panel pink 'frame' to hide the little tears (to be honest, it strengthened the whole image anyhow) and made new tabs. Then checked and double checked things were the right way up before the panel was stuck in place - success at last!

So, it ended up being rescued although am not sure I'd have gone to so much trouble for just a 'run of the mill' card. Too much time and effort had gone into this one to give up straight away.

And you know what, I was looking through my file of ideas and 'how-to's' as I filed this one away and so many of them are printed and carefully kept and used, thanks to the lovely Sarn. I disposed of a lot of magazine stuff I'd kept (it does eventually date) - but not one single thing from Sarn 'left the building'. Thank you, my very clever friend!