A first play with alcohol inks and Yupo - Part 2

The other day I posted about my first play on Easter Sunday with alcohol inks and Yupo paper. I showed the two cards I made with the darker colours - and here are the two lighter ones: 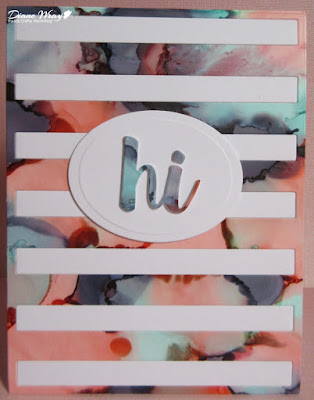 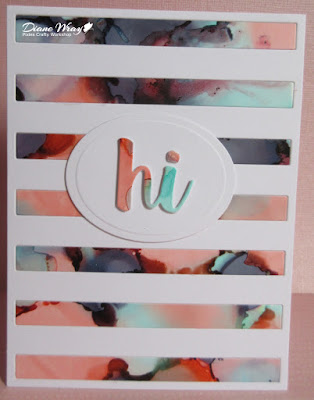 At first glance they might look identical - but in fact I used the positive and negative pieces of the inked Yupo sheet and a snippet of white card:

- as with the darker piece I just added drops of the inks plus some blending solution onto the sheet of Yupo paper then blew through a straw onto them, for as long as it took to add more coverage and spread the inks around a bit and repeated the process until I felt it was time to stop

- did the same using a snippet of white card

- stuck the completed front panels to the card fronts

- stuck the ovals to the card fronts using red line tape (mostly as I wasn't sure of just how Collall glue would react against the alcohol ink) - I found out with the darker cards that fun foam and Yupo slither about a lot before they dry properly. Fine if you leave them alone but it made me aware of possible reactions with a medium I'm only just getting to know

- die cut the sentiments from two layers of white card (snippets) and a top layer of the inked Yupo. The word I used is 'hi', from the MFT 'Hello There' set of dies

- glued the words 'hi' to the ovals

- two cards from one piece of inked background!

Jennifer McGuire used a fabulous 'Starburst' die for this technique but I just used the dies I already had. Thinking back, I have other cover-up dies such as the MFT 'Stitched Diagonal' which may work better. It's all trial and error, as they say! Half the fun of crafting :)