Here's my card, using an 'unbranded made in China' die sent to me out of the blue and here's what I made: 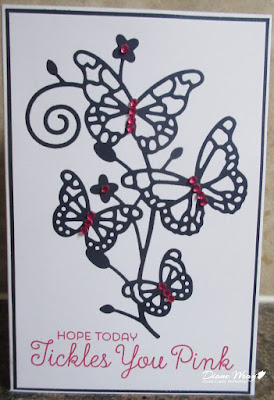 - a smaller piece of thin indigo coloured card, which has a slight shimmer to it, for the backing frame

Ha, I almost had a moment of total madness when I set out to make this card by pondering over actually inlaying the die cut! Can you imagine putting all those teensy little pieces of white back in place? Although by running the whole panel through the Cuttlebug as I described above, you do achieve the impression that the die cut is inlaid anyhow.

It's absolutely ages and ages since I dug around in my quite large box of self-adhesive pearls and gems and I must have almost a gazillion sheets of those multi-coloured KanBan gems. Seems to me like they've been breeding on the quiet. 😉