Should have gone to Specs***rs

Just recently, I got a couple of pairs of new specs from a well known UK chain of opticians shops. One pair is 'recreational' as they now call it, which is close work combined with computer distance varifocals. Plus my first ever pair for distance/driving, with the bottom part tuned into being able to focus on the important things on the dashboard, like the speedometer for instance.

When I got home, was about to pop the cream paper carrier bag they came in straight into recycling - until I had a look at the pattern on the bag. It was rows and rows of black outline spectacles - not unlike the whole sea of spectacle frames you get when you walk into one of their stores.

Then, an idea popped straight into my head for a card. I wonder how many of you will groan at the link I forged using pieces cut from the bag and the (admittedly purposely bought) sentiment? 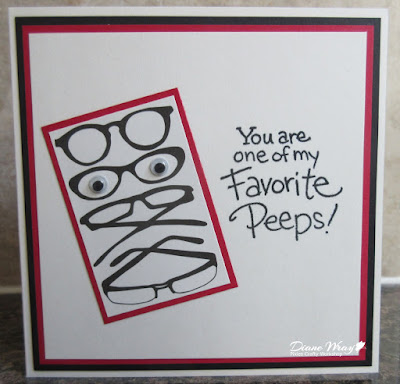 - then a layer of the same light cream card stock, trimmed down and put to one side whilst I worked on the 'toppers'. I say topperS as the bag had a repetitive 'spectacles' pattern on it and I managed to make three cards all the same on this run and still have a further five trimmed down panels (approx. 1.5" x 2.4" in size) left to play with. Am keeping those on the desk here in a little container, for a day when inspiration eludes me and I just want to cut, stamp and stick :)

- for the 'toppers' I had to get the best I could out of the dinky carrier bag and worked out that four pairs of specs on top of one another would work - there were a few combinations to play with. So, I trimmed three panels of specs the same for this little run of cards

- stamped the sentiment(s) using a sweet little cling stamp by Stampendous called 'Favorite Peeps' and Memento 'Tuxedo Black' ink (I confess again to finding this on line after I realised none of my sentiment stamps were really right - super fast delivery from The Stampman as well!)

- final touch, a pair of googly eyes added with Collall All Purpose glue - only on one pair though, let's not go for overkill!

However, I certainly don't suggest it's worth spending a whole load of pennies, just to get your hands on a sweet little carrier bag to chop up :)